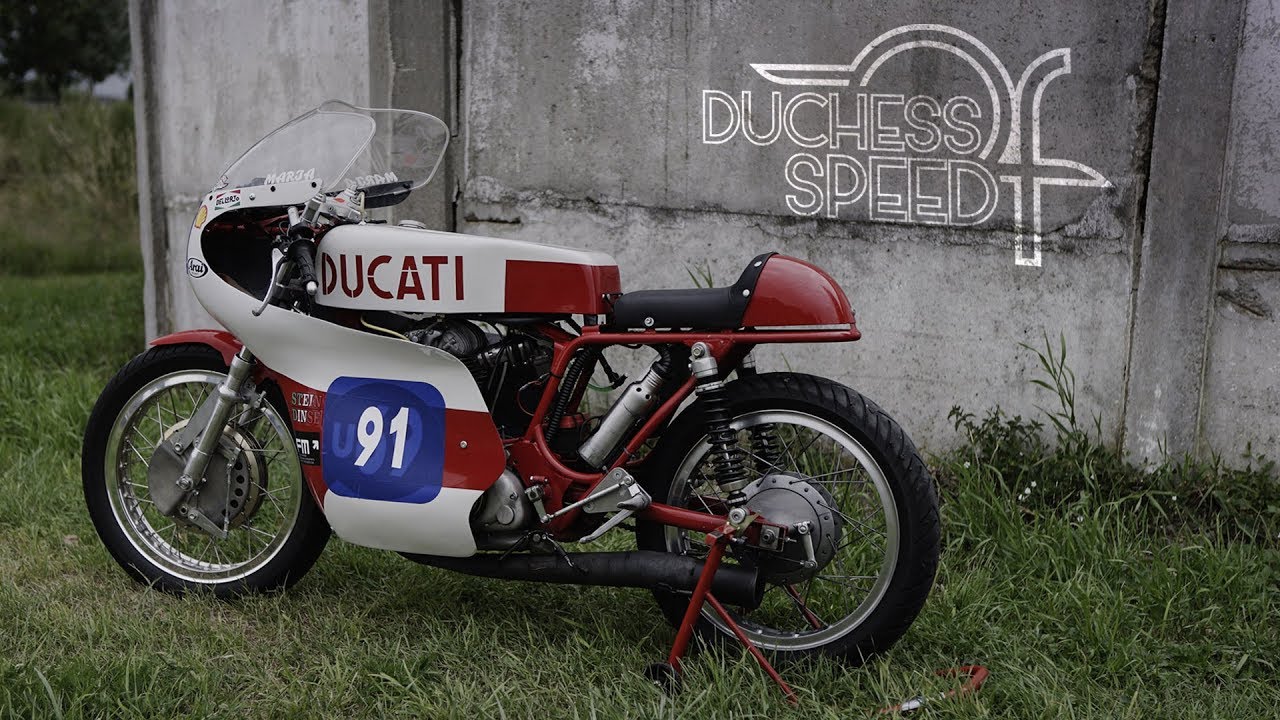 1969 Ducati: The Duchess of Speed. The father who gets his son interested in cars is a storyline that we love to hear but have heard more times than we can count. It’s less often that we come across a young woman who races motorcycles. After hanging off the side of her father’s 1968 BMW sidecar shortly after getting her license, Marja Elisat began racing motorcycles. And though she enjoys life as a student, she is often busy on the weekends at the race track or to be found at home working on the family’s collection of vintage bikes, like the1969 single-cylinder 350cc Ducati racing machine featured in today’s video.

Her father Stephan used to race it when he was younger, and now with a freshly-rebuilt 350cc sheathed behind the flowing fairing, it has become something of an evolving motorsport heirloom. It’s been modified over its life, now featuring an Italian-made racing frame and a special drum brake setup to complement the revitalized heart. The engine feeds a unique dry clutch, and is fed by a 40mm Dell’Orto carburetor, and with the help of some souped up components like the forged high-compression piston, produces roughly 40hp—not bad for a bike lighter than most mopeds.

It’s a special bike, one that as Stephan says, “cannot be bought in shops.” For that reason, competing on it adds an extra element to any of Marja’s pre-race nerves; of course the primary concern is the wellbeing of the rider, but she doesn’t want to drop the bike she and her dad have spent so much time and memory wrapped up in. She’s diligent in her preparation though—learning the track thoroughly, going over laps in her head in the trailer before the real thing—and she’s not new to being around motorcycles in general.

Her father, Stephan, remembers Marja always enjoying the times when they’d go for rides together on his bikes, but back then her “main thing” was horseback riding. Hindsight makes the connection between riding a horse and then later a motorcycle seem pretty straightforward, but think of how the lopsided ratio is of girls who grow up interested in riding horses to those interested in racing motorcycles. Point is, it’s uncommon for young people to participate in motorsport at all, less so for girls, and very much less so for girls who can drop a knee on a bike twice their age.

Before she started racing them on circuits though, Marja’s reason for riding motorcycles was significantly more pedestrian: she got her license mainly so she wouldn’t have to waste time on the bus that ran from her village to the nearest town center. With a love for speed that carried over from horseback riding and a father very happy to help, it wasn’t long before that point A to B mindset expanded.

After doing some basic lessons on how to ride safely on the street, Stephan brought his daughter to the race track for some training on how to ride fast the proper way. Marja  took to it quickly and progressed to the point where people encouraged her to think about racing on some level. After climbing around and leaning off the side catamaran-style in the role of “the monkey” with her dad and his sidecar (a former BMW competition machine from 1968 making around 45hp from its 600cc boxer), it wasn’t long before Marja was racing on her own. Now she competes with her dad’s old Ducati in the German Historic Championship and the Klassik Trophy when she isn’t studying, but even so, Marja and Stephan still make time to go for rides together just down the street for the sake of it.