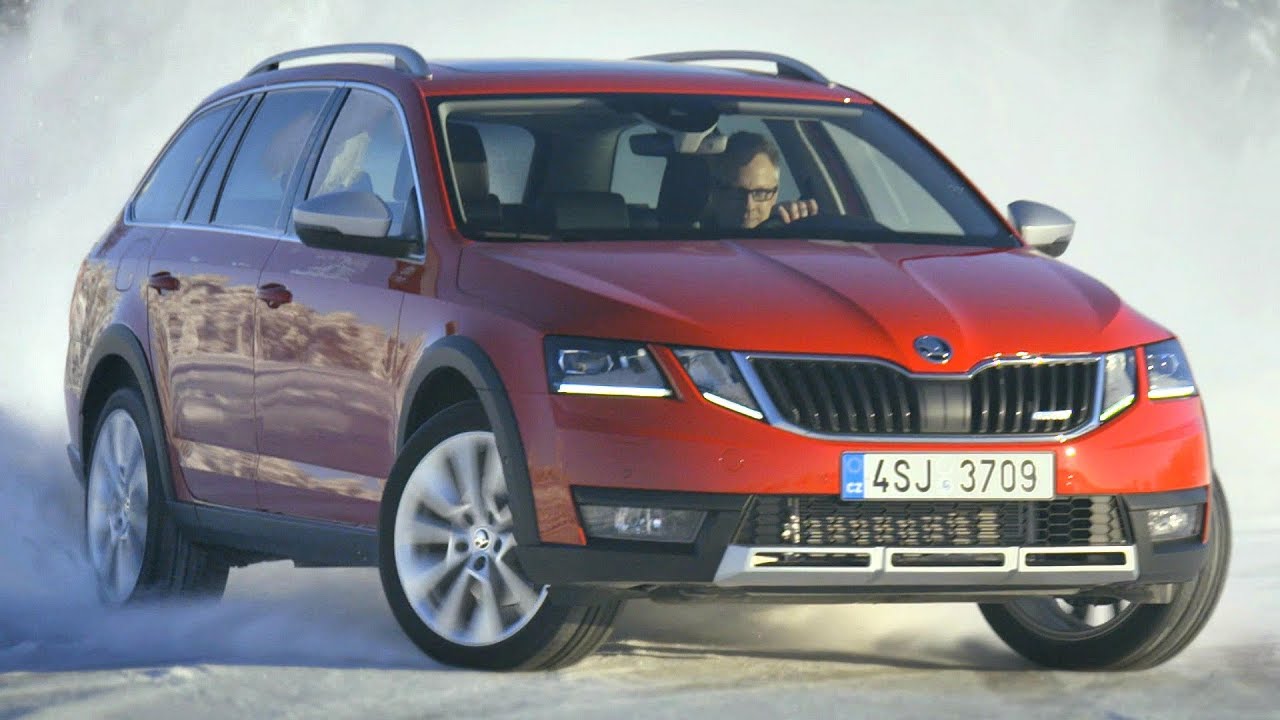 The ŠKODA OCTAVIA SCOUT comes with distinguishing features: a robust design in an off-road look, a wide variety of uses, powerful, yet efficient engines and all-wheel drive as standard. Like all the current ŠKODA OCTAVIA models, it has a new front section with additional headlights and a modified rear. Its discrete, robust appearance is characterised by special features such as moulding on the bumpers, wheel arches and door sills, silver-coloured underbody protection at the front and rear, 17-inch alloy wheels, as well as a wider rear track. The standard equipment includes the Rough-Road package, LED daytime running lights and the C-shaped LED tail lights.
The ŠKODA OCTAVIA SCOUT also impresses with its interior space – which is particularly generous for the compact car segment – good layout, distinct versatility, a high level of functionality and great driving characteristics. Thanks to the 171-mm ground clearance, a departure angle of 14.5 degrees and all-wheel drive with electronically controlled multi-plate clutch as standard, the five-door car also guarantees driving pleasure when taking the OCTAVIA SCOUT off-road. As standard, the front and rear axle are equipped with an electronic differential lock, which makes pulling away easy on any surface.
Numerous storage solutions in the interior increase its practicality. The heated, three-spoke leather steering wheel with multifunctional buttons, LED ambient lighting in the decorative door trims – which can be set to one of ten colours – illumination of the front and rear interior door handles, special seat covers that are particularly breathable, and heated front seats – all of which come as standard – ensure exceptional comfort.
For the ŠKODA OCTAVIA SCOUT there is a choice of three powerful yet efficient engines. The 1.8 TSI petrol delivers 132 kW (180 PS) and is coupled with a 6-speed dual-clutch transmission. The 2.0-litre diesel is available in a choice of two different power variants. A 6-speed manual gearbox or a 7-speed DSG transmission are available for the 110-kW (150-PS) engine. The top-of-the-range diesel with a power output of 135 kW (184 PS) is equipped with a 6-speed DSG transmission.
The current ŠKODA OCTAVIA SCOUT can of course be equipped with any of ŠKODA’s new-generation modern infotainment systems. The capacitive touch displays of the Bolero, Amundsen and Columbus systems feature a glass design. The wide range of driver assistance systems sets benchmarks for the competitors. New functions include Trailer Assist, Blind Spot Detect, which warns of any vehicles in the blind spot, and Rear Traffic Alert, which monitors traffic coming from the sides and from behind when manoeuvring etc. Front Assist with City Emergency Brake function has been enhanced with Pedestrian Protection with Emergency Brake function. Park Assist has been further perfected and, when reversing, Manoeuvre Assist complements the rear parking sensors, automatically braking the vehicle as soon as it detects an obstacle and a collision is imminent.
World premiere for the ŠKODA KODIAQ SCOUT and ŠKODA KODIAQ SPORTLINE
ŠKODA’s large SUV is a further highlight on the exhibition stand in hall 2. The spotlight will be on two variants in particular. The ŠKODA KODIAQ SCOUT and the ŠKODA KODIAQ SPORTLINE will be celebrating their world premiere.
The Czech car manufacturer is continuing its campaign in the SUV segment with the new ŠKODA KODIAQ SCOUT model variant. The ŠKODA KODIAQ SCOUT comes equipped with all-wheel drive as standard and emphasises its off-road capabilities both visually and through its technological features. Silver-coloured design details including distinctive underbody protection at the front and rear accentuate its rugged and robust appearance. The new 19-inch alloy wheels specially designed for the ŠKODA KODIAQ SCOUT also contribute to its powerful appearance. There is a choice of two petrol and two diesel engines.
The ŠKODA KODIAQ SCOUT stands out thanks to its distinct design features. With a length of 4.70 m – which remains the same as in the base model – up to seven seats, and the largest interior and boot within its segment, the ŠKODA KODIAQ SCOUT impresses in a number of ways. With its modern design, it represents a successful mix of emotiveness and rationality. At the same time, it highlights its robust and powerful character with special features.
For fans of a sporty appearance, the Czech car manufacturer has designed the ŠKODA KODIAQ SPORTLINE as an elegant and dynamic SUV variant. The exterior and interior are both characterised by specially designed features. There is a choice of four engine versions available for the ŠKODA KODIAQ SPORTLINE: two TSI petrol engines and two TDI diesel engines ranging from 110 kW (150 PS) to 140 kW (190 PS).