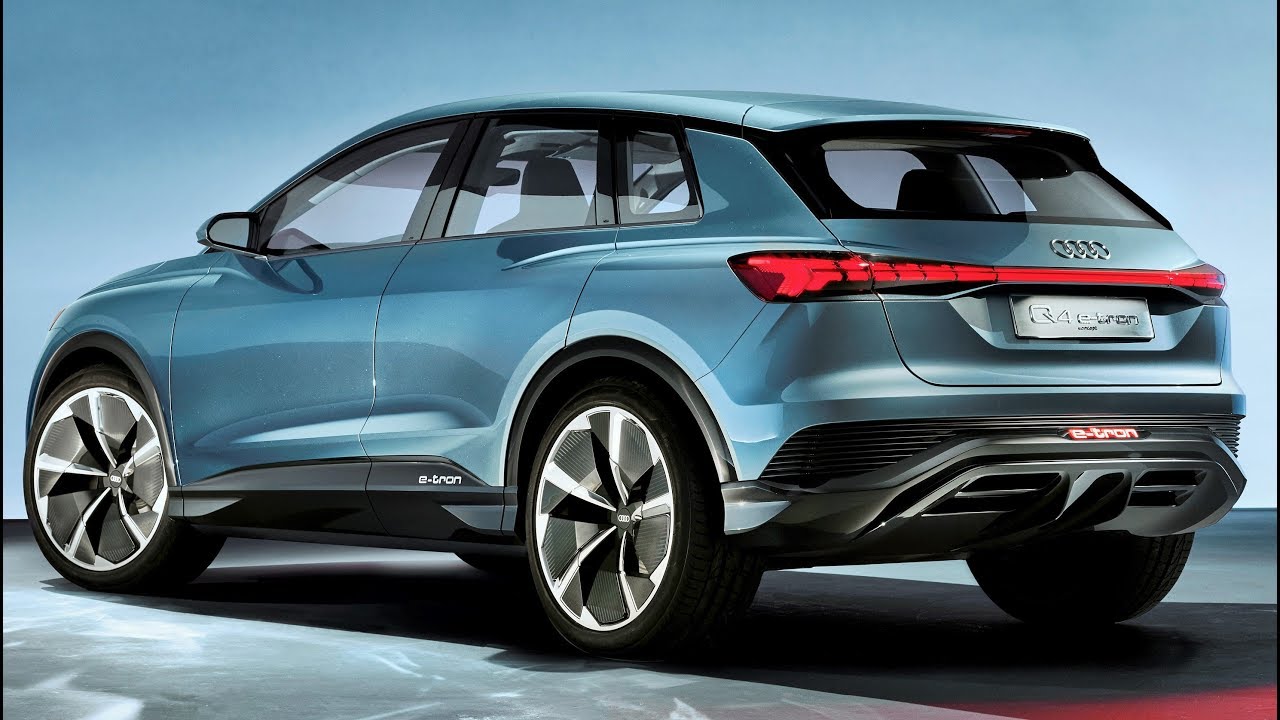 The Audi Q4 e-tron concept is a compact four-door SUV with an exterior length of 4.59 meters whose relation to the Audi e-tron is apparent at first glance.

Two electric motors mobilize 225 kW of system power in the Q4 e-tron concept. As is typical for Audi, the driving power of the concept vehicle is brought to the road with quattro all-wheel drive. Thanks to excellent traction, it accelerates from zero to 100 km/h in just 6.3 seconds. It reaches its maximum speed at an electronically limited 180 km/h. A large battery with a capacity of 82 kilowatt hours takes up almost the entire space in the underbody area between the axles. The range of over 450 kilometers – in line with the WLTP standard – sets the benchmark in its class. The technology of the Q4 e-tron concept controls the modular electrification platform (MEB) that will be integrated in numerous electric vehicles produced by the Volkswagen Group in the future, from the compact class to the superior medium-size class.

The modular electrification platform (MEB) offers a broad range of drive variants and power levels. The performance version of the electric drive is installed in the Audi Q4 e-tron concept. The front and rear axles are each powered by an electric motor – the Q4 is a quattro. There is no mechanical connection between the axles. Instead, an electronic control ensures that the torque distribution is coordinated optimally, and it does so in fractions of a second. That enables the electric SUV to achieve optimum traction in all weather conditions and on any type of surface.

In most cases, the Audi Q4 e-tron concept mainly uses its rear electric motor, a permanently excited synchronous motor, in order to achieve the highest efficiency. For reasons of efficiency, the drive torque is generally distributed with a rear-axle bias. If the driver demands more power than the rear electric motor can supply, the electric all-wheel drive uses the front asynchronous motor to redistribute the torque as required to the front axle. This also happens predictively even before slip occurs in icy conditions or when cornering fast, or if the car understeers or oversteers.

The electric motor in the rear end has an output of 150 kW and mobilizes a torque of 310 newton meters; the front engine supplies the front wheels with up to 75 kW and 150 newton meters. The system power is 225 kW. The battery in the vehicle floor stores 82 kilowatt hours, which allows for a range of more than 450 kilometers according to the WLTP standard. The battery is charged with a maximum of 125 kilowatts. As a result, it takes hardly more than 30 minutes to return to 80 percent of the total capacity.

A key factor for the sporty character and outstanding transverse dynamics is the low and central position at which the drive components are installed. The high-voltage battery system is optimally matched to the dimensions of the Audi Q4 e-tron and is located between the axles in the form of a flat, broad block beneath the passenger compartment. The battery system weighs 510 kilograms. The center of gravity of the Audi Q4 e-tron concept is therefore at a similar level to that of a sedan with a conventional drive system. Axle load distribution is perfectly balanced at almost 50:50. The front wheels of the Q4 e-tron concept are guided on a MacPherson axle with adaptive dampers. In the rear, there is a multi-link axle with separate springs and adaptive dampers.

The brand with the four rings launched its electric offensive with the world premiere of the all-electric SUV Audi e-tron in September 2018. By 2025, Audi will offer twelve automobiles with all-electric drive in the most important markets worldwide and achieve roughly one-third of its sales with electrified models. The SUVs within this portfolio include the e-tron and the e-tron Sportback due to make its debut in 2019. In addition, there will be a range of models with classic body layout such as Avant and Sportback. The range will cover every relevant market segment from the compact class to the luxury class.

MLB, MQB – modular longitudinal platform and modular lateral platform: These component systems for vehicle development represent a great success story in all segments of Audi and the Volkswagen Group. Previous platforms were designed primarily for the use of combustion engines. What is new and different about the modular electrification platform: It was designed specifically and exclusively for automobiles with electric drive systems. Axles, drives, wheelbases and the interaction between all components are selected and adapted specifically for e-mobility. The placement of the large-volume battery units and their geometry can be optimized without having to make concessions to other drive concepts that must always be taken into account in the MLB and MQB.