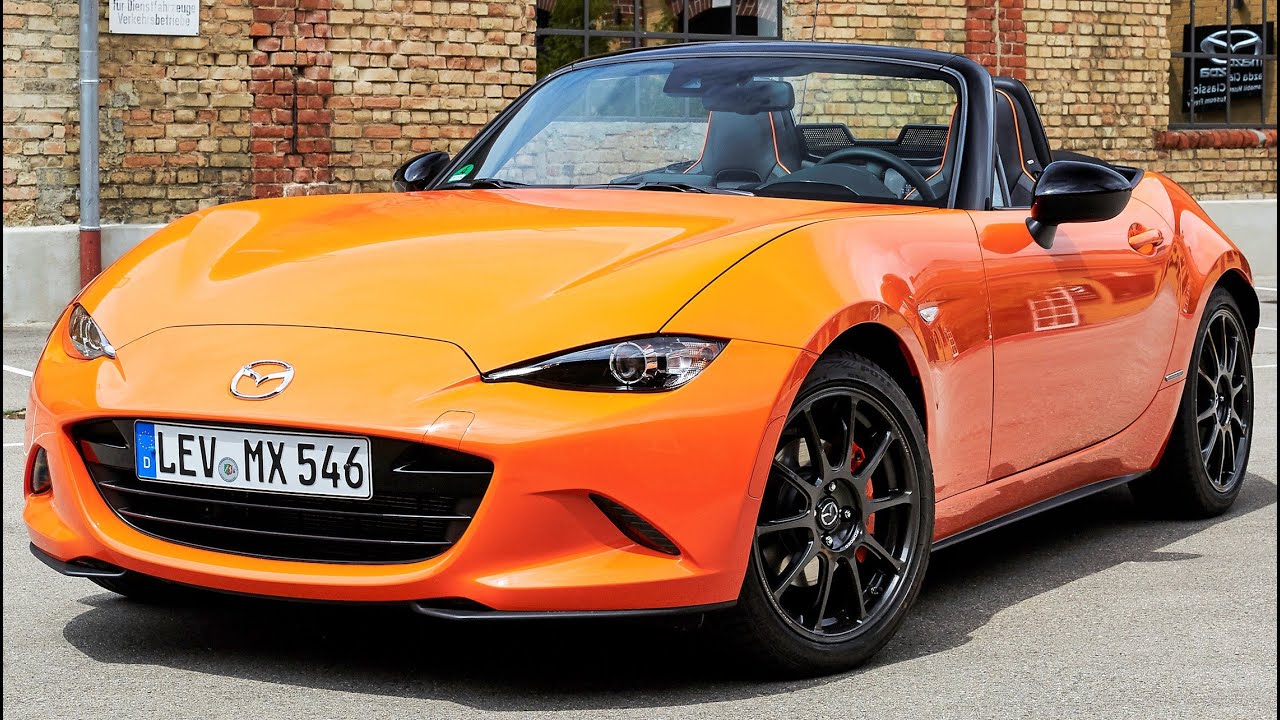 For the 30th anniversary model, we developed Racing Orange, a strikingly vivid body colour. The starting point for this entirely new colour was the yellow of the MX-5 Club Racer, exhibited as a show car at the 1989 Chicago Auto Show along with three production models in red, white and blue. Yellow is generally a good match for a sports car, evoking passion with its high brightness and intensity. However, we wanted to go beyond merely reusing the colour of the 1989 model and instead, to celebrate the future of MX-5, created a special new orange that brings to mind the sunrise and stirs a sense of anticipation. In addition to this commemorative model, our booth at this year’s Chicago Auto Show (2019) echoed the 1989 exhibit with three other MX-5s in red, white and blue, symbolising the start of the story and demonstrating our respect for every generation.
The commemorative model also offers many other exclusive features. They include forged aluminium wheels by RAYS Co., Ltd. in dark gunmetal paint with a design based on the wheels ﬁtted to Global MX-5 Cup race cars, orange callipers (Brembo at the front, NISSIN at the rear), Bilstein dampers and RECARO seats with contrasting orange stitching and piping. The exclusive speciﬁcation brings the 1989 Club Racer show car to a new life while further enhancing the MX-5’s unique driving pleasure.

The newly developed Racing Orange keynote colour is a precision blend of the pigments to create a special orange with an optimum balance of intensity and brilliance. To better express the MX-5’s pure sports car character, the development team used a gloss rather than metallic ﬁnish. The vivid orange body contrasts starkly with exterior parts such as the piano black A-pillars, door mirrors, the RF’s roof and seatback garnishes as well as the dark gunmetal wheels, thereby emphasising the anniversary model’s exclusivity.

These lightweight, high-rigidity alloy wheels were co-developed by Mazda and RAYS Wheels exclusively for this anniversary model, with a design based on the RAYS ZE40 forged aluminium wheels used by all Global MX-5 Cup racers. The sporty appeal of this special version is further enhanced by “30th Anniversary” being embossed on the alloy wheels. The soft-top version for the Japanese market is ﬁtted with 16-inch wheels, while the RF version for Japan and all models for overseas markets get 17-inch wheels. Highlighting the exhilaration of driving the MX-5, both sizes feature a ﬁnely honed spoke design combined with a dark gunmetal ﬁnish.

Orange is the key element in the anniversary model’s colour coordination. Outside, vivid orange front and rear brake calipers stand out against the dark gunmetal wheel spokes, emphasising this special version’s sporty look. Inside, the door trim, instrument panel and shift lever feature eye-catching orange contrast stitching, while orange piping stands out powerfully on the black seats. Altogether, the orange accents in the cabin combine with the Racing Orange body colour on the upper door trim to further enhance the exclusivity of the anniversary edition – and the pride owners are bound to feel.

The MX-5’s exclusive seats, jointly developed by Mazda and RECARO, provide ﬁrm support and outstanding hold. For the 30th anniversary model, orange stitching and piping add to the quality feel worthy of a special edition.

These specially tuned dampers achieve smoother vehicle behaviour and an enhanced feeling of unity with the car. Combined with the engine strut brace for extra rigidity, the Limited Slip Differential for superior roadholding and the exclusive forged aluminium wheels by RAYS, the Bilstein dampers provide an even more controlled yet reﬁned ride.

Seat headrests each feature a pair of built-in speakers with sound tuned by TrueSpace® technology by Bose®. This enables enjoyment of clear and powerful sound in any driving environment, providing a broader soundscape even when travelling with the top down.