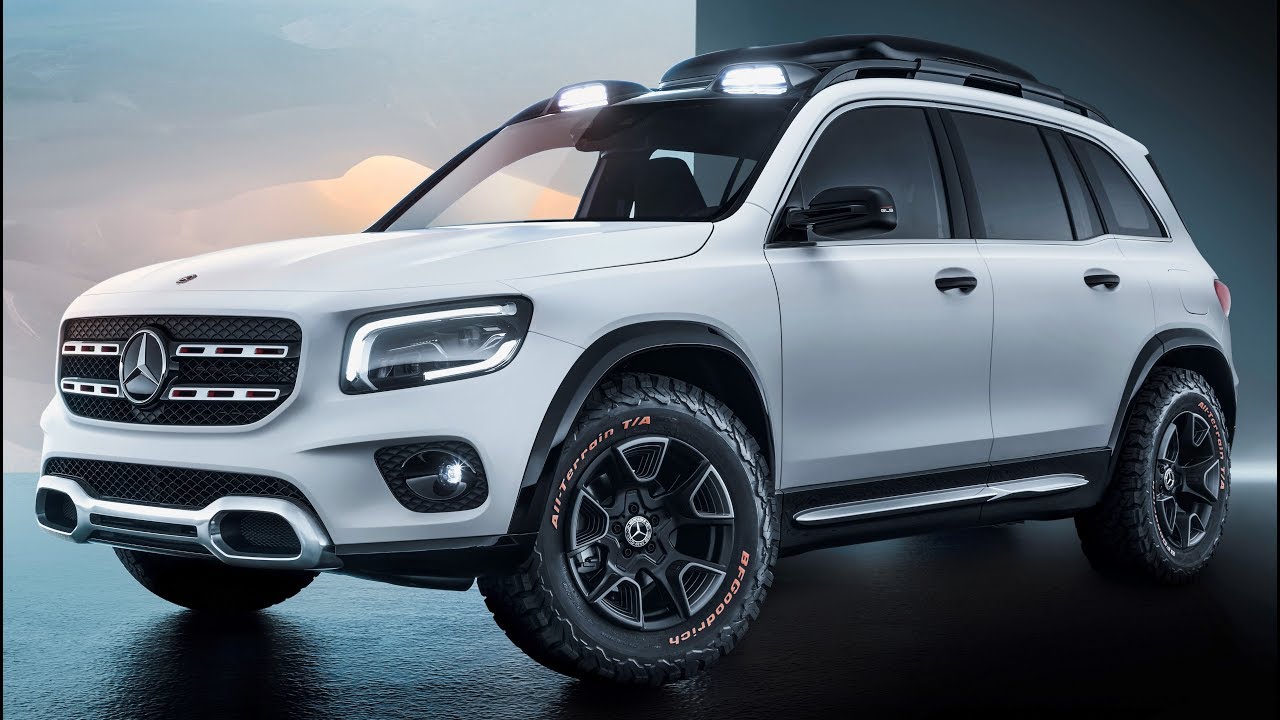 The Concept GLB is powered by the M 260 four-cylinder petrol engine combined with an 8G-DCT dual clutch transmission, with a maximum output of 165 kW/224 hp and peak torque of 350 Nm. The engine block of diecast aluminium with cast iron cylinder liners has CONICSHAPE® technology, which is also known in-house as “trumpet-honing”. To further minimise piston friction and lower fuel consumption, the cylinder bore is widened at the lower end of the cylinder liners. The resulting, conical shape resembles the mouth of a trumpet.

An innovative low-friction oil and optimised piston rings also reduce friction losses. To take account of the higher specific output, the pistons themselves feature cooling ducts. This also ensures more efficient combustion. The balance shafts for smooth engine-running are located in the lower section of the crankcase. To enhance comfort even further, there is a centrifugal pendulum damper in the powertrain.

The Concept GLB is equipped with the permanent all-wheel system 4MATIC, with fully-variable torque distribution. This sporty all-wheel drive configuration allows the driver to use the DYNAMIC SELECT switch to influence the characteristics of 4MATIC. Three characteristic maps are available to control the all-wheel drive clutch, though the system responds flexibly to the current driving situation in any mode. In regular driving operation, the drive programme “Eco/Comfort” is based on an 80:20 distribution (front axle:rear axle), while in “Sport” it is 70:30. In off-road mode the all-wheel drive clutch acts as an inter-axle differential lock, with the basic distribution a balanced 50:50.

4MATIC components include the power take-off to the rear axle, which is integrated into the automated dual clutch transmission, and the rear axle differential with an integrated multiplate clutch. This is electro-mechanically operated. Via a crown wheel and a ball ramp, an electric motor exerts an axial force on the clutch pack to open or close the plates. The rear axle differential compensates the different paths/rotational speeds of the rear wheels. The advantages of this control system are above all non-rpm-dependent operation across the entire actuation range, pilot control of the clutch while still stationary and higher efficiency thanks to the ball ramp concept.

The basic architecture of the dashboard corresponds to that of the B-Class, with a widescreen cockpit facing the driver and the functions and displays controlled via the Mercedes-Benz User Experience – MBUX. New features are the off-road-type tubular elements in milled aluminium which round off the dashboard at the lower end. These give the dashboard support an impression of robustness, power and a certain fun factor. Below the three round centre nozzles is the air conditioning control panel with an intentionally analogue look, whose buttons create the impression that they have been milled from a solid aluminium cylinder.

The robust character of the interior continues in the centre console. Aluminium tubular elements with a brushed structure in a grab-handle look lend solidity to the design of the components and controls. Along the doors, the SUV character is underlined by the horizontal grab handle that forms a robust part of the door panel structure as a machined aluminium tube.

The seats, fittings and door panels are partially lined in nappa and nubuk leather, the predominant colour tone being “chestnut brown”. Echoing the exterior highlights, there are orange trim strips and seams in just a few places. The centre sections of the front seats have two parallel rows of perforations in their woven nubuk leather covers, revealing the orange-coloured fabric sub-layer. These extend from the front edge of the seat cushion to the upper edge of the integrated head restraint.

The backrest of the middle seat row is 40:20:40 split-folding, and can be folded down to create a level load surface. The seat surfaces have a 40:60 division. The second seat row is fore-and-aft adjustable by 140 mm – by 90 mm to the front to increase luggage space or legroom for occupants right in the rear, and by 50 mm to the rear if particularly generous legroom is required in a five-seat configuration. Eight-stage seat backrest inclination adjustment in the second seat row also facilitates adaptation according to the current space or comfort requirements.