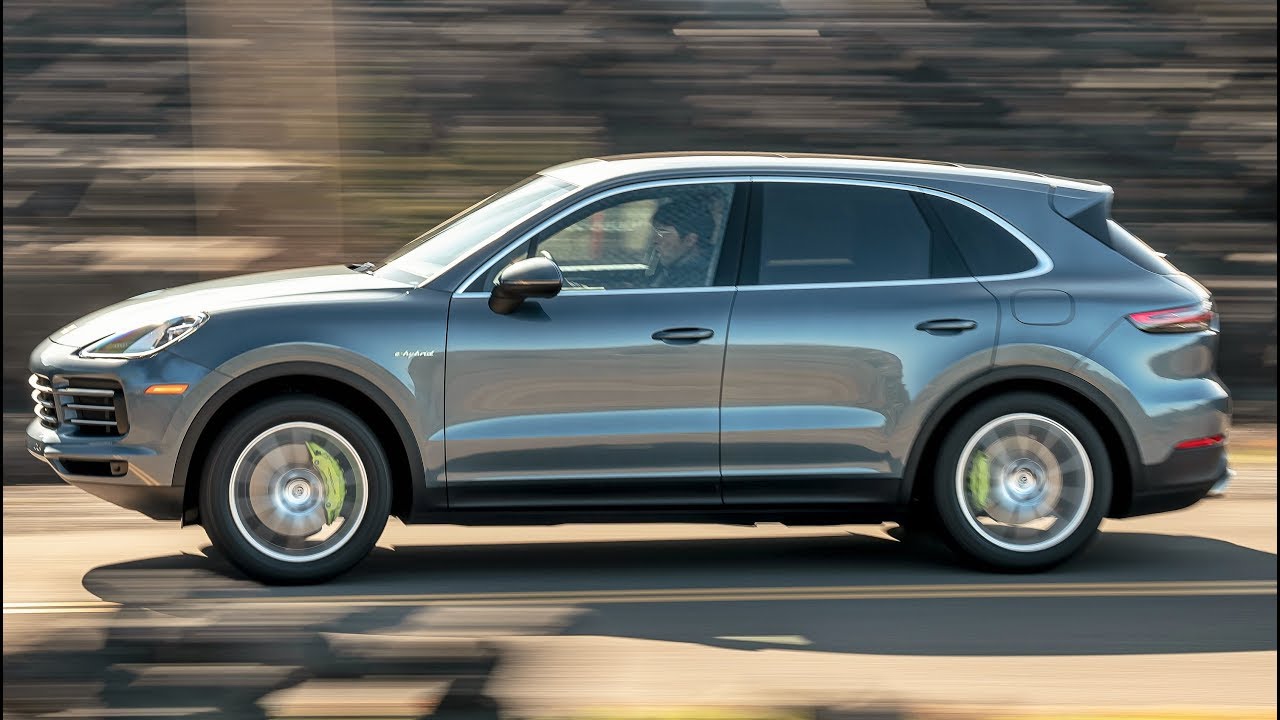 Porsche began pioneering electrification in the luxury SUV segment back in 2010 with the Cayenne S Hybrid. In 2014, the Cayenne S E-Hybrid was another groundbreaker, with the introduction of plug-in hybrid technology. The next stage in the journey towards e-mobility is the new Cayenne E-Hybrid. While the performance of the combustion engine generates 335 hp (250 kW) marking a moderate improvement over the supercharged V6 in the preceding model, the electric motor generates over 43 percent more power than the motor in the previous generation. They combine to produce a total output of 455 hp (340 kw) and 516 lb-ft of peak torque just above idle, marking increased in both horsepower and torque as compared to the preceding model. The battery capacity also increases by about 30 percent to 14.1 kWh without increasing in size relative to battery in the preceding model. As in the hybrid Panamera models, the boost strategy matches that of the 918 Spyder super sports car. The plug-in hybrid powertrain enables acceleration from 0 to 60 mph in 4.7 seconds and a top track speed of 157 mph. EPA fuel consumption and electric range figures have not been announced at this time.

The new Cayenne E-Hybrid has a range of different driving modes at its disposal. Performance is the primary focus behind implementing a hybrid powertrain in the Cayenne model line, a fact highlighted by the standard Sport Chrono Package. Using the drive mode dial, the driver can toggle between the four modes: E-Power, Hybrid Auto, Sport and Sport Plus. Pressing the Sport Response Button in the middle of the mode switch temporarily adjusts all variable aspects of the vehicle to their most performance-focused setting for 20 seconds. E-Hold and E-Charge modes are also available. These are available via the “Hybrid” menu screen in the 12.3” Porsche Communication Management (PCM) screen. It is also possible to activate the driver-configurable “Individual” driving mode using a dedicated capacitive switch on the center console.

The extent to which the electric motor boosts performance or the battery recharges depends on the driving mode. In the performance-focused Sport and Sport Plus modes, virtually all of the battery’s energy can be used for a boost. In Sport mode, the battery is charged just as much as is required for a new boost. In Sport Plus mode, the battery is recharged as quickly as possible. In the other modes, a limited amount of energy is available for boosting in order to support efficient driving. This enables more frequent electric powertrain assistance over a greater period than the preceding model offered. In both modes, the combustion engine remains in operation. In Sport Plus mode, the Cayenne E-Hybrid is able to reach its top track speed of 157 mph.

The Cayenne E-Hybrid always starts in E-Power mode. This prioritizes the electric driving experience. Accordingly, the electric motor and entire high voltage system provide the maximum performance of 134 hp (100 kW) and 295 lb-ft. The driver can adjust the interplay between the electric and combustion engines using a pressure point in the accelerator pedal produced by the control system. Up until this pressure point, the SUV runs purely on electricity. When the driver deliberately surpasses the pressure point, the combustion engine kicks in and provides access to the system’s full drive potential. In E-Power mode, an “E-Launch” function is available when the battery has sufficient charge: if the brake is pressed when stationary and the accelerator is held at the pressure point at the same time, the Cayenne E-Hybrid starts when the brake is released with maximum, electric-only acceleration. To allow the driver to monitor this function, the electronic instrument cluster displays its activation. In the electric-only E-Power mode, the new Cayenne E-Hybrid can reach a maximum speed of 83 mph. If the battery charge status is below the minimum required for EPower mode, the car automatically switches to Hybrid Auto mode.

The new smart Hybrid Auto mode enables the most efficient operation of the Cayenne E-Hybrid in city and intercity traffic. For the ideal combination of electric motor and combustion engine, the drive control calculates the optimum operating strategy based on driving profile, charge status, topography and speed information. Depending on these conditions, the system selects electriconly driving for situations where it makes most sense in terms of overall efficiency.

Pricing for the Porsche Cayenne E-Hybrid starts at $79,900 excluding a $1,250 delivery, processing and handling fee. The new model is expected in U.S. showrooms in late summer, 2019. EPA estimates for fuel consumption and electric range are still pending.