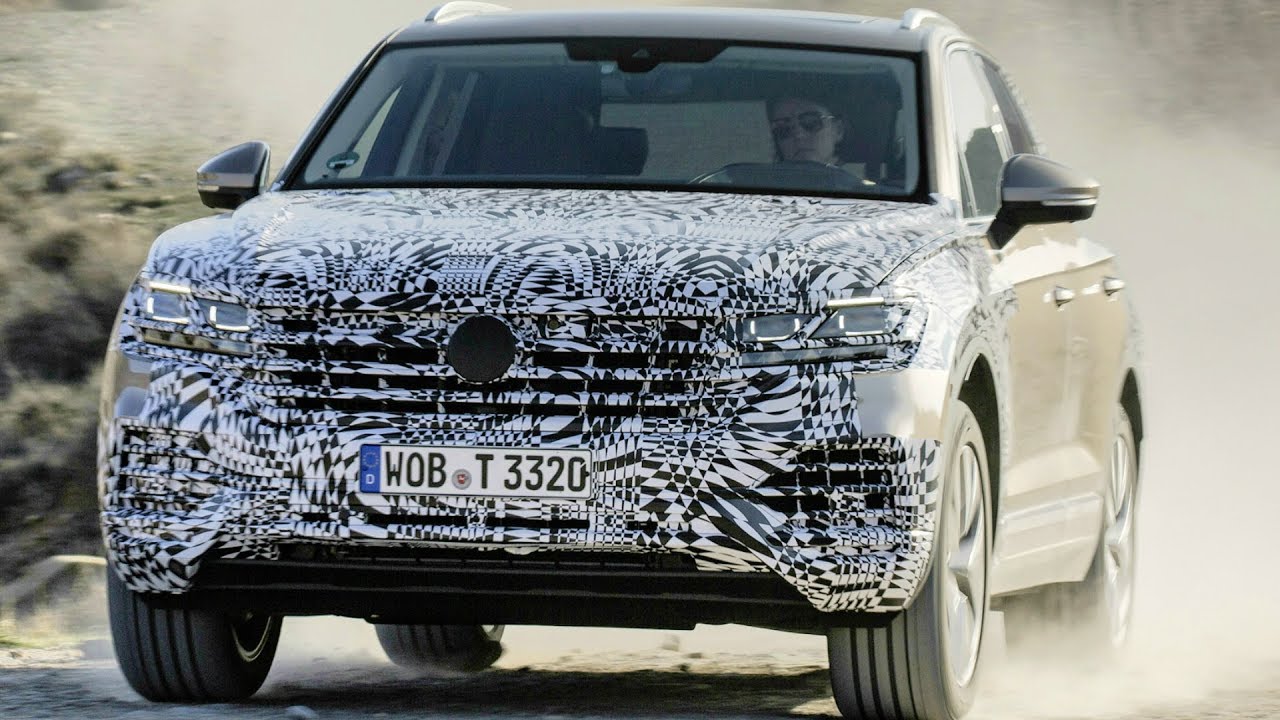 Poor roads, rough terrain, hardly anyone around. At first glance, the area around the Spanish town of Saragossa is not terribly inviting. In other words: the perfect environment for extensive test drives in a car that’s still secret. And not supposed to be photographed.

This means that the testers and engineers here did not need to put too much effort into masking the car. Beneath the partial camouflage, therefore, the new Touareg is quite recognisable. In four months, this third model generation will arrive at German dealers. In the province of Aragon, the SUV flagship completed its last test drives, called “approval test run” by the engineers.

The terrain is challenging, the roads are varied, and the external conditions diverse: the countless kilometres driven here by the head engineers in the last few weeks offer many opportunities to refine the strengths of the Touareg, to iron out the smallest weaknesses – and to ensure that everything will work perfectly later.

The pre-series vehicles were already on the road in cold and hot regions. Eventually, they will have covered more than three million kilometres. Then the SUV is ready for the customer.

Everyone involved here is convinced of the quality of the vehicle: “Let it run, it can do it,” encourages Karsten Schebsdat, Head of Driving Dynamics, from the passenger seat to the test driver. Despite his objectivity and quiet demeanour, he is visibly proud of what “his” Touareg is able to do. For example, steering around extremely narrow bends, almost like a Golf.

While on the road, Schebsdat repeatedly invites the driver to try out different driving modes, in order to experience the huge spread of the chassis. Bumpy sections are traversed sometime in comfort mode, sometimes in sport mode. “You don’t even notice the poor road surface, do you?”

No, I certainly don’t, at least less than I expected. That is due not least to the new stabilisers on the front and rear axles. In contrast to a conventional steel stabiliser, the separated stabilisers can be adjusted actively or also be separated and thus reduce the lateral tilt of the Touareg to almost zero.

As well as the new stabilising system, rear axle steering is also on board for the first time. At higher speeds, this gives the Touareg greater agility in bends and more directional stability. At speeds slower than 37 km/h, the rear wheels take the opposite direction to the front wheels, thus easing manoeuvring. The fact that this reduces the turning radius from 12.20 metres to 11.13 compared to the previous model, is perhaps not so important out here in the wild. But the Touareg customers will soon appreciate this innovation during the first visit to the car park.

There are 17 more weeks until market launch – enough time for the last fine tuning, which, under the Spanish winter sun, is not limited to the chassis and steering. The high degree of interconnectivity, above all, constantly presents new challenges to the testers and developers. Each change can have an impact on other systems: some things can be managed by means of a software update, but that in turn leads to changes elsewhere. In this manner, many functions were tested and possible errors removed.

This effort is absolutely necessary: “Right away, from the introduction in 2002, the vehicle established itself as a premium SUV,” explains head of model-development Jochen Brüning. The new generation aims to reinforce – and improve – this position. Andreas Reckewerth, Overall Vehicle Head Developer, repeatedly undertook topic-related test drives.

For example, it took a while for the developers to program the new digital cockpit to achieve perfect handling,. Now it works fine: an advanced control centre, consisting of two 12 and 15 inch displays. They provide all the important information to the driver, as well as access to infotainment, navigation and air-conditioning control. The two screens are integrated into the instrument panel and appear as one surface. The digital displays underline the technical-cool look conveyed by the Touareg.