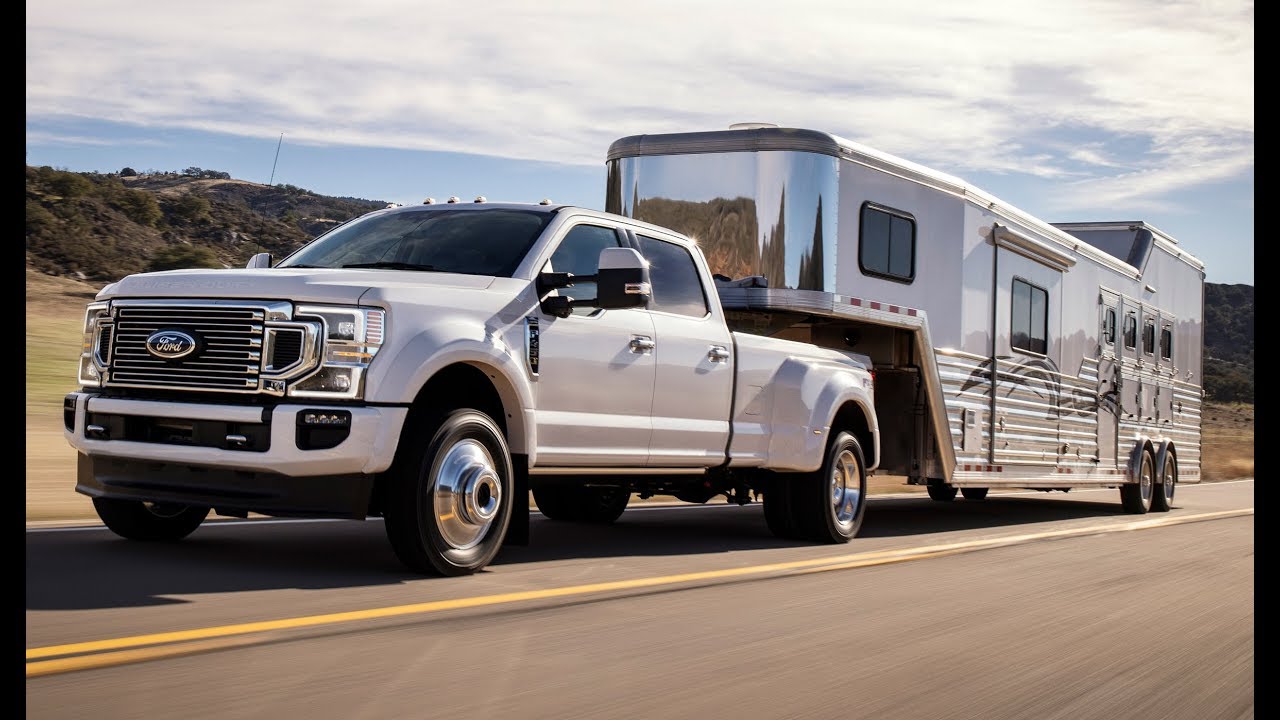 2020 Ford F-Series Super Duty – Best-Ever Capability. With all-new heavy-duty trucks coming from cross-town rivals Ram and Chevrolet (as well as GMC), it’s no surprise that Ford is eager to update its 3-year-old F-Series Super Duty. When it goes on sale this fall, the 2020 Super Duty will bring new engines, updated styling and an extensive list of active-safety technology to the big-truck fight.

First things first: Ford isn’t yet ready to share the only numbers that really matter to heavy-duty truck buyers, namely horsepower, torque, towing and payload ratings. That said, the Blue Oval promises the 2020 model will offer the “highest-ever” tow and payload ratings in Super Duty history. For 2019, the Super Duty range is able to tow up to 35,000 pounds and carry 7,640 pounds of payload.

Under the hood, buyers will have have three engines to pick from. The base option is a carryover 6.2-liter gasoline V8, which will likely have output ratings similar to the current model’s 385 horsepower and 430 pound-feet of torque. Next up is an all-new 7.3-liter pushrod V8, claimed to be the most powerful gas engine in Super Duty history. Finally, there’s a new, third-generation 6.7-liter Power Stroke turbodiesel V8. It has a new turbo, new internals and a new 36,000-psi fueling system to deliver power; the outgoing engine was rated for 450 hp and 935 lb-ft.

Those engines now mate to a new 10-speed automatic transmission, which weighs just 3.5 pounds more than and fits into the same physical space as the outgoing six-speed. (The base 6.2-liter engine will still be offered with the six-speed on low-cost trims.) Ford promises improved efficiency from the new transmission. In addition to the expected Tow/Haul, the 10-speed adds extra driving modes: Slippery, Deep Sand and Snow, and Eco, the last of which feels like a token effort in a heavy-duty pickup truck.

Ford’s engineers also added lots of driver aids to the new Super Duty, starting with the Pro Trailer Backup Assist familiar from the F-150. It allows drivers to steer a trailer while reversing by simply twisting a knob on the dash — the truck figures out which way to turn the steering wheel to move the trailer in the indicated direction. Key for heavy-duty users, the system even works with gooseneck and fifth-wheel trailers. Adding the feature required upgrading the Super Duty with electrohydraulic power steering, which Chief Engineer Mike Pruitt says “improved” the truck’s steering, giving it lighter effort at lower speeds.

Other driver aids include precollision braking with pedestrian detection, blind-spot monitoring with trailer coverage, lane-keep alert and automatic high beams, all of which come standard on the XLT trim level and higher. Inside the cabin, the Super Duty comes standard with a 4G LTE Wi-Fi hotspot that can connect up to 10 devices at a time and supports FordPass Connect telematics functions. USB Type C charging ports and wireless phone charging are also newly available.

Of course, the 2020 Ford Super Duty received a thorough face-lift inside and out, but it’s not exactly a dramatic new look. There are new grille designs, all of which vary by trim level; they were designed to help improve airflow to the engine bay and work along with a relocated airbox to better feed and cool the big V8s, with dual-rear-wheel trucks getting special high-flow grilles. There are new wheel designs, restyled bumpers, new tailgate designs and a new look for the exterior lighting.

Likewise, there are cabin updates, with new materials on many trim levels. The Limited model, for instance, gets a new two-tone Ebony and Highland Tan treatment, along with leather, ash wood and aluminum trim, while in Platinum trucks there’s new Onyx Argento wood.

While we’re eager to see some specific numbers on the 2020 Ford F-Series Super Duty, it’s clear the freshened truck will be even better poised to handle anything and everything owners throw at it — whether that’s towing, hauling or any other tough work.

2020 Kia XCeed – SUV Practicality With Engaging Handling Of A...