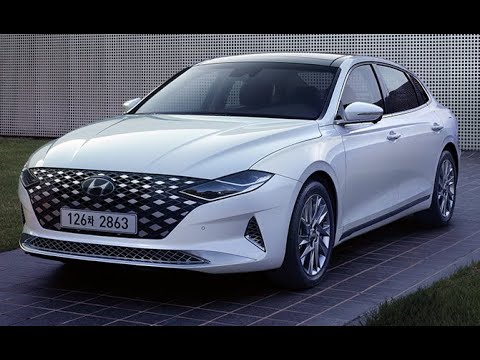 2020 Hyundai GRANDEUR (AZERA) Interior and Exterior. It’s hard to believe that it’s been three years since the latest Hyundai Grandeur (also known as the Azera is certain markets) was unveiled, but it has. To keep the full-size sedan fresh, the South Korean carmaker has given it a facelift, and judging by the first images shown here, it’s a pretty drastic one.

As you can see, the front end has been completely redesigned and features a massive grille that spans the entire width of the fascia. The radical new face makes its production debut on the Grandeur, having first seen the light of day on the front of the Le Fil Rouge concept. It incorporates a diamond pattern that is repeated in the sharp headlights that flank it, making for a nicely integrated look.

This diamond pattern also hides the car’s daytime running lights which appear to be part of the grille’s metallic “dots” when turned off and, when lit up, form a chevron emanating from each headlight. The surrounding air intakes have also been re-profiled to form an X-shaped graphic on the front end.

The body side has also been reworked – the shoulder line now stretches all the way to the rear door handles, while the second line going above the rear wheels has been raised. The rear quarter light windows have also been reshaped, appearing more upright and giving the car a more regal look. The rear end is softer and features slimmer full-width tail lights, along with a chrome strip that carries the twin/quad tailpipes.

The more imposing design betrays the Grandeur’s reworked dimensions, having been stretched some 60 mm to 4,990 mm. In a rare move for a facelift, some 40 mm of that increase goes into the wheelbase, and the car is also 10 mm wider. Hyundai promises one of the most spacious interiors in its class as a result.

Speaking of which, the wholesale revamp continues on the inside, where the Grandeur receives a revised dashboard design with full-width air vents and larger displays for the infotainment and the configurable instruments – these now measure up to 12.3 inches across. The leather-lined centre console is also new, equipped with a touchscreen for the climate controls and push buttons that replace the usual gearlever.

Other new features include an air purification system, a blind spot camera, Safe Exit Assist, a BMW-style Remote Parking Assist for slotting into tight spaces and a revised autonomous emergency braking system that now detects oncoming traffic when turning at a junction – and it also now works in reverse. There’s also a thicker rear windscreen for reduced noise, along with a strengthened body structure.

In Korea, the Grandeur will be available with a choice of four powertrains, including a new 2.5 litre Smartstream G petrol engine and a 290 hp 3.3 litre V6. There’s also a hybrid model that pairs a 2.4 litre MPI engine with a 35 kW electric motor, as well as a liquid petroleum gas (LPG) model with a 3.0 litre engine. The latter receives a circular tank instead of a cylindrical one for
improved luggage space.