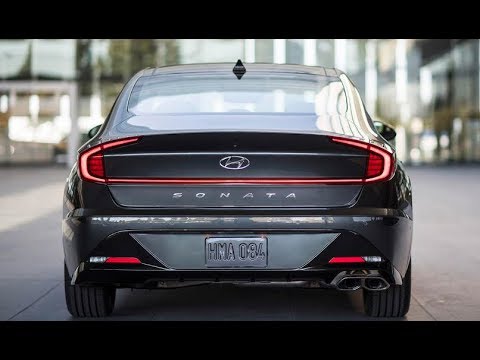 2020 Hyundai Sonata Interior and Exterior. Hyundai once again wants to leave its mark on the automotive design landscape. Just as it did with the sixth-generation 2011 Hyundai Sonata, which introduced the brand’s characteristic “fluidic sculpture” design language, Hyundai is making waves with the fully redesigned 2020 Sonata. The look is definitely bolder than the sedan it replaces. But is it better? We think the answer is a resounding yes.

Aside from the vaguely similar grille shapes, there’s very little to compare up front. The 2020 model’s front end looks significantly lower compared to the previous seventh-generation car. Part of the Sonata’s low-slung appearance could be a clever illusion, but Hyundai does say it lowered the front end by 1.4 inches compared to the last model. Hyundai is also particularly proud of the Sonata’s hood that extends all the way to the grille, a design feature employed these days mostly by premium makes. Then there are the slender headlights that flank the grille. An LED strip runs along the bottom edge of the lamp until it connects with the 2020 Sonata’s real party trick: a chrome trim piece that runs along the hood all the way to the A-pillars. The trim nearest the headlights illuminates to give the Sonata its unique lighting signature.

Looking at the Sonata from the profile view, you can see a lot of thought went into the car’s proportions. Designers shifted the passenger compartment farther back, decreased the front overhang, and increased the rear overhang to simulate a rear-drive car’s cab-rearward look. Then, you’ll notice the main character line, which connects the headlights to the taillights and helps accentuate the new Sonata’s curves. If that line looks familiar to you, it’s probably because you saw it on last year’s Hyundai Le Fil Rouge concept. Lastly, the Sonata adopts a dramatically sloped roofline that’s steep enough to make you think there’s a hatch back there. But nope, the Sonata comes with a good, old-fashioned trunk.

Moving on to the rear, your eyes are drawn to the new C-shaped taillights, which at first look like they were ripped right off the Honda Civic. But there’s a full-width LED bar that joins them together to give the Sonata its own identity. The trunk lid keeps the molded ducktail spoiler of the previous generation, but here it looks even more pronounced.

The 2020 Hyundai Sonata’s interior has improved so much, there really isn’t any point going over the differences. Just look at them side by side. Not only is the design a big step up from the dull, anonymous look of the past model, but the material quality also rises several notches. And perhaps most importantly for rear passengers, Hyundai made the Sonata’s rear seats more spacious.

Two powertrains will be offered initially, both from Hyundai’s ‘Smartstream’ engine family. The first is a 1.6-litre ‘T-GDi’ four-cylinder turbocharged petrol engine, making 134kW and 264Nm.

Additionally, buyers will be able to opt for a new 2.5-litre naturally-aspirated ‘GDi’ petrol engine, making 142kW and 245Nm. Both engine variants will be mated to an eight-speed automatic transmission as standard.

As for available tech, there’s a range of new features that will be available with the next-gen Sonata.

First up is the new Digital Key, which is accessible via a dedicated smartphone app. Using Near Field Communication (NFC) technology, owners will be able to control vehicle functions through their phone, such as locking/unlocking the doors, or remotely starting the engine.

There’s also a new 8.0-inch colour head-up display, which Hyundai says has a luminance of more than 10,000 candelas per square metre.

Drivers will be able to access a range of upgraded assistance and active safety technologies, which the company claims give the Sonata Level 2 autonomous driving capabilities.

Available features include autonomous emergency braking with pedestrian and cyclist detection, Safety Exit Assist (which stops occupants from opening doors into oncoming traffic), and Lane Follow Assist which combines with the adaptive cruise control to keep the vehicle centred in its lane at speeds between 0 and 145km/h.

There’s also a new Blind-Spot View Monitor, which has already been seen on various overseas Hyundai and Kia products like the Palisade and K900, which bolsters the blind-spot monitoring sensor by using a side mirror-mounted camera system to project a live stream of the vehicle’s blind-spot into the available 12.3-inch digital instrument cluster.

Rounding out the available technologies are a surround camera system, reverse AEB, and Remote Smart Parking Assist, which helps to autonomously maneuver the vehicle in and out of parking spaces using the aforementioned digital smart key.