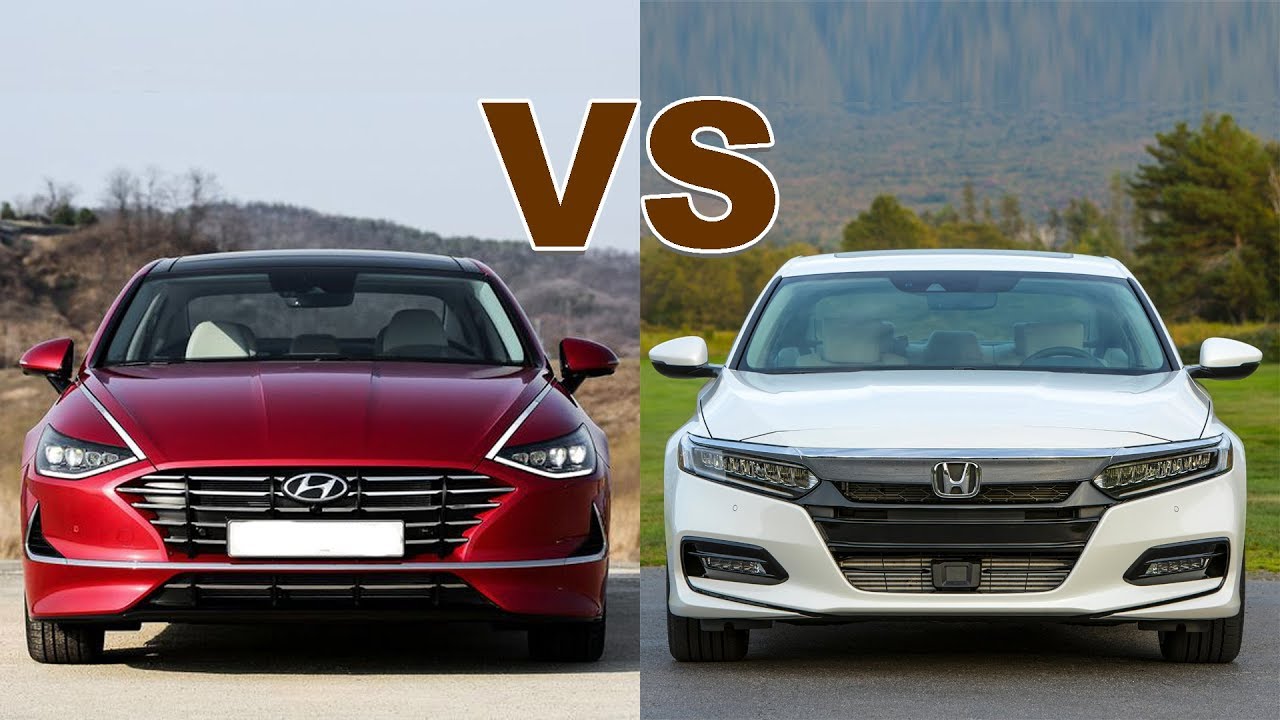 2020 Hyundai Sonata vs 2019 Honda Accord. While FCA, Ford, and others have walked away from the midsize sedan segment in favor of crossovers and SUVs, Toyota, Honda, and Nissan still lead the space with stalwarts Camry, Accord, and Altima. Hyundai is keenly aware that the segment is shrinking, but the automaker believes the 2020 Sonata has the chops to take market share with sleek new styling, an all-new powertrain, and tons of high tech features.

Dimensions
Hyundai clearly had Accord in its sights when it designed the 2020 Sonata. Ahead of our first look at the 2020 Sonata, the company provided briefing documents that show how the new Sonata lines up against the 2019 Accord. In every major exterior dimension, the difference is less than an inch.

Exterior Styling
The 10th-generation Honda Accord debuted in 2017 with a fresh coupe-like profile and bold, chrome-bar face. It was deemed handsome and athletic-looking in an evolutionary way, but not an envelope-pusher or boundary-breaker. And why would it be? Accord is foundational to Honda, especially in America, and if it ain’t broke, why fix it?

In contrast, it’s clear that Hyundai is swinging for the fences with the 2020 Sonata. Hyundai wants to get back to the buzz Sonata generated in 2011. That sixth-generation Sonata introduced Hyundai’s Fluidic Sculpture design language and brought a sexy coupe-like profile to what had been a very traditional three-box sedan.

For the eighth-generation 2020 Sonata, Hyundai’s lead designer SangYup Lee fought hard to deliver a sleek coupe profile and rear-drive proportions on a front-drive platform. Coke-bottle curves and crisp character lines give credence to the Hyundai’s new “Sensuous Sportiness” design language, but the real art is in the details. Chrome brightwork surrounds the side windows and runs forward to the headlights; a “dynamic lasso” says Lee. This lasso dissolves into a smooth gradient of light (the daytime running lights) and then a strip of amber when the turn signal or hazards are activated. It’s very slick. So is the Sonata’s full-length steel hood, which terminates at the grille opening with no shut line.

In our eyes, Sonata is the clear winner from an exterior design standpoint, but as the challenger brand, this is the battle Hyundai had to win. Sonata had the advantage of time, coming two years after the current Accord—to have any chance at taking market share, Hyundai had to place big bets.

Interior
Inside we see no clear winner. Accord’s execution is open and airy, minimalist, yet very functional. It looks clean and feels high quality. Everything you need is under your fingertips, from the steering wheel controls, to the infotainment system and push-button transmission system that has spread across the Honda and Acura lines.

Sonata, pictured below, borrows the transmission buttons (calling it SBW for shift-by-wire), but at first touch, it feels lighter and less substantial. The execution of the horizontally oriented dash is gorgeous; clearly a lot of time and energy went into designing the large color touchscreens, slim air conditioning vents, and premium-feeling switches and knobs. Sonata is also proudly tech forward.

Drivetrain—Smartstream vs. Earth Dreams
When the 2020 Sonata arrives at dealerships later this year, it will do so with two “Smartstream” branded gasoline direct-injection (GDI) powertrains, both mated to eight-speed automatic transmissions. The newest engine is the 2.5-liter inline-four cylinder Smartstream G2.5 engine, which Hyundai claims will make an estimated 191 horsepower and 181 lb-ft of torque. The Smartstream G1.6 T-GDI engine is an updated version of the 1.6-liter turbo-four Hyundai uses across its lineup, making 180 horsepower and 195 lb-ft of torque in this application. At the New York auto show, Hyundai announced that a Sonata hybrid will debut next year, followed by a high-performance N Line variant making more than 275 horsepower, but no other details were released.

Accord has its bases covered via two “Earth Dreams” gasoline-powered, direct-injected and turbo-four engines. The entry-level engine is a 1.5-liter turbo that makes 192 horsepower and 192 lb-ft of torque, while the step-up 2.0-liter turbo engine makes 252 horsepower and 273-lb-ft of torque. Accord’s hybrid powertrain combines a naturally aspirated 2.0-liter Atkinson-cycle inline four with an AC synchronous permanent-magnet electric motor and has a total system output of 212 horsepower and 232-lb-ft of torque. This two-motor hybrid powertrain works without a traditional automatic transmission, while a CVT, 10-speed automatic, and six-speed manual are available for non-hybrid Accords.