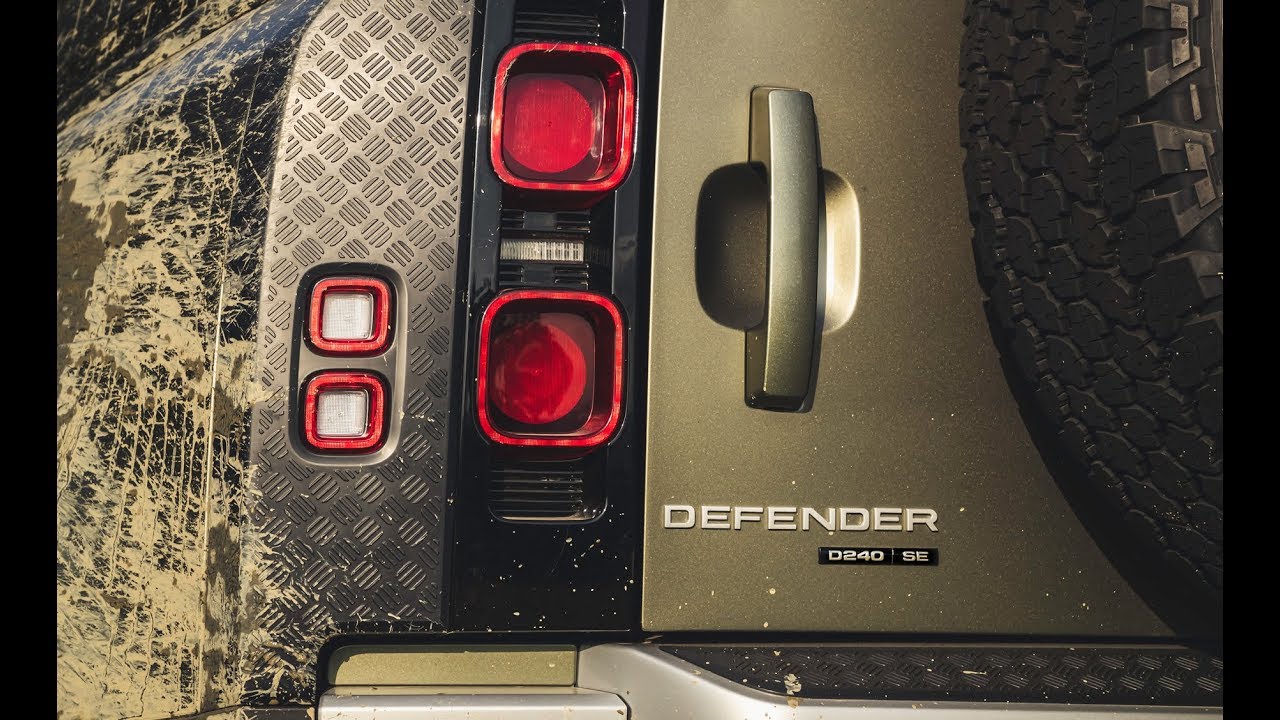 From the outside, the Defender is a thoroughly modern take on its boxy predecessor. It’s a simple two-box shape, but every corner and edge has been given a soft and slightly chunky curvature. Tributes to the original are everywhere including the front headlights that have round elements inside a squared-off shape, the slightly sloping contrasting roof, the small skylights at the back, and the sheer vertical tail. The rear tailgate still swings open on a vertical hinge and you can still have a full-size spare mounted to it. The grille is a slim piece with a single bar across the middle like many modern Land Rovers. The thick C-pillar is an interesting design feature, though it probably results in a nasty blind spot a la the Toyota FJ Cruiser. And to get an idea of its size, the Defender 90 is a little over a foot longer than a Jeep Wrangler, and the Defender 90 is a little less than 10 inches longer than the Wrangler Unlimited. Both Defenders are a few inches wider and taller than the Wrangler, too. Worth noting is that the Defender uses an all-aluminum chassis, the platform of which is called D7x. According to Land Rover, this is the stiffest SUV it has ever created.

Land Rover also has a whole line of accessories, 170 to be exact, ready to be applied to the Defender. As you can see in the images, they include fairly basic things such as a roof rack and bumper guard. But there are more off-road-oriented options such as a minimalist intake snorkel and a winch that’s smartly integrated into the front bumper.

Inside, the Defender looks suitably rugged, much more so than its chic, urban-adapted cousins. The dashboard is quite plain and upright, and features a large amount of shelf space for storage as well as integrated grab handles. The materials look like a durable plastic on most of the dash. There is some wood trim that appears in the center console and on the doors, along with many exposed bolts to emphasize the utilitarian nature of the Defender. The shifter sits up on the center stack with the climate controls, which is important because the Defender is available with a front bench seat that does away with the center console. On the topic of seating, the Defender 110 is available with a third row of seats, though only with the front bucket-seat arrangement for a maximum occupancy of seven. The Defender 90 naturally has just two rows, but with the front bench can hold up to six people in close quarters.

Of course hardcore Defender fans want to know about the mechanical bits and how capable the Defender is. And if they’re satisfied with the Range Rover’s capabilities, they should be happy with the new Defender, because it uses most of the same stuff as the flagship Land Rover. This means it does have independent suspension at all four corners unlike the solid-axle original, but it also has the Range Rover’s full-time four-wheel-drive system with low and high ranges that can be had with an active locking rear differential and manually locking center differential. The suspension is also electronically adjustable so it can go from its standard 8.5 inches of ground clearance to 11.5 inches.

Under the hood is a standard turbocharged inline-four making 296 horsepower and 295 pound-feet of torque. This engine is only available on the Defender 110, and Land Rover says it will accelerate the SUV to 60 in 7.7 seconds on the way to a top speed of 119 mph. The optional engine is the same 48-volt mild-hybrid turbocharged inline-six as found in the Range Rover, and it makes 395 horsepower and 406 pound-feet of torque. This engine is standard in the Defender 90 and will get the SUV to 60 mph in 5.7 seconds, or 5.8 seconds for the 110 model. Top speed for the six-cylinder Defender is 129 mph. Both engines are coupled to eight-speed automatic transmissions from ZF. Impressively, Land Rover has rated both bodystyles of Defender to tow up to 8,200 pounds. While these are the only two powertrains announced for the Defender, it wouldn’t be surprising to see diesel or full hybrid options in the future, considering how closely related it is to the Range Rover.