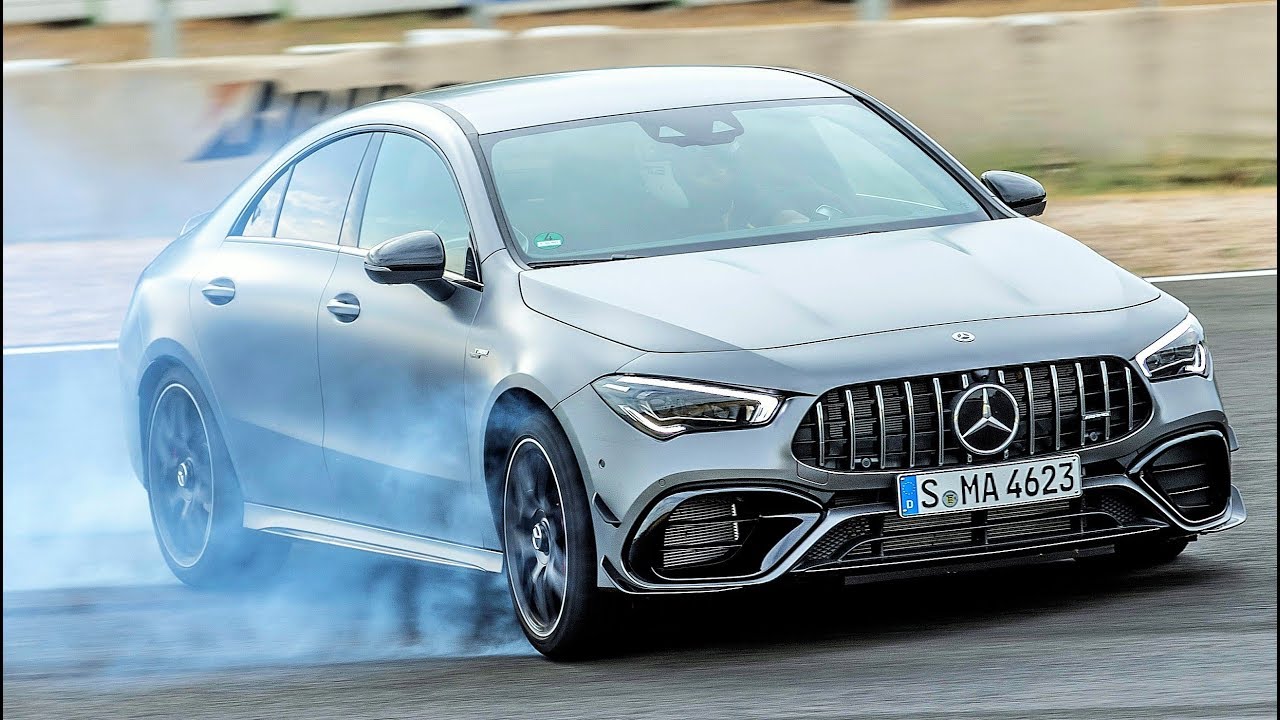 The new Mercedes-AMG A 45 4MATIC+ and CLA 45 4MATIC+ models are even more distinctive than their predecessors. The exterior conveys sheer driving pleasure even at standstill. For the first time, the compact class now also features the AMG-specific radiator grille with a wider lower contour and twelve vertical louvres – as a clear indicator of AMG Performance family membership. At the same time, the pronounced “shark nose”, the slim, deeply contoured headlamps and the flat, aerodynamically favourable bonnet with powerdomes visually lower the front section to create the impression of extremely dynamic forward thrust.

The rear view is characterised by two round twin tailpipes (82 mm diameter) and the wide rear apron. The S-models are distinguished by their larger, 90 mm exhaust tailpipes with internal fluting and AMG lettering. The impression of width at the rear is emphasised further by the slim two-piece rear light clusters. The diffuser with two vertical twin fins contributes to better aero-performance (CLA 45: four individual fins) – it is extended forward at the centre of the vehicle, making it work more effectively. The effect is rounded off by the spoiler lip in the vehicle colour on the roof spoiler, or on the boot lid (CLA 45).

The AMG developers extensively reinforced the bodyshell, as it provides the basis for the precise self-steering characteristics, as well as track and camber stability, also when driving at high speed. A lightweight aluminium plate bolted underneath the engine – the “shearing plate” – increases the torsional rigidity at the vehicle’s front end. This is supplemented by a strut tower brace between the front suspension struts and pistol-shhaped “shotguns” ‑ these are additional reinforcing plates connecting the side members to the A-pillars to minimise movements of the front section. Diagonal struts at the front and rear of the underbody further improve rigidity. As a result the entire suspension system responds highly precisely even at the physical limits, giving the driver clearly defined feedback – with considerably reduced body torsion around the longitudinal and transverse axis, and less rolling and pitching on bends, when braking and during load cycles.

With an output of up to 310 kW (421 hp), the completely newly developed 2.0-litre engine is the world’s most powerful turbocharged four-cylinder manufactured for series production. Mercedes-AMG has bettered the output of the preceding engine by 30 kW(40 hp). Maximum torque has also increased from 475 to up to 500 newton metres. With an output per litre of up to 155 kW (211 hp), the new Mercedes-AMG high-performance turbo engine even ranks ahead of many well-known super-sports car engines. The new, highly efficient powerpack is produced on an innovative production line in Affalterbach, on the “One Man, One Engine” principle.
In the 45 models, the four-cylinder ensures extremely agile performance in two output classes: with 310 kW (421 hp) as the S-model and with 285 kW (387 hp) in the basic version.
This positioning logic has already proved successful for the AMG Performance models with a V8 engine, and meets individual customer wishes even better. The new compact sportscars absolve the sprint from zero to 100 km/h in record time: the A 45 S 4MATIC+ requires only 3.9 seconds (CLA 45 S 4MATIC+: 4.0 seconds), while the basic A 45 4MATIC+ model absolves this discipline in 4.0 seconds (CLA 45 4 MATIC+ in 4.1 seconds). The top speed of the basic models is electronically limited to 250 km/h, while the S-models are capable of up to 270 km/h ex factory. With the optional AMG Driver‘s Package, the top speed can also be increased to 270 km/h for the basic variants.
Apart from its performance figures, the new engine impresses with its immediate response. To this end the torque curve was carefully balanced (“torque shaping”): The maximum torque of 500 Nm (480 Nm in the basic variants) is available within a range of 5000-5250 rpm (4750-5000 rpm in the basic variants).