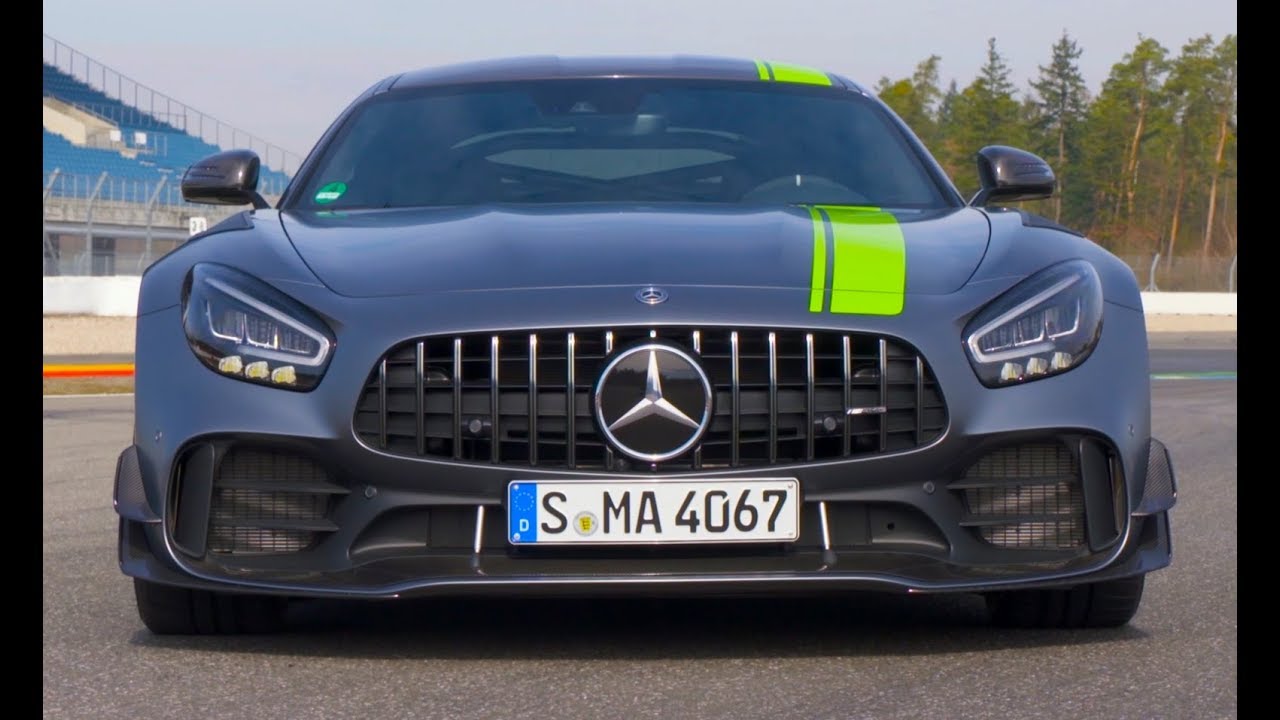 2020 Mercedes AMG GT R Pro – Extreme look & more racetrack performance. It seemed like the Mercedes-AMG GT R was already plenty extreme, a car conceived for track use but civilized just enough that it can be a riot on the street. But AMG’s engineers weren’t quite done and upped the ante with the GT R Pro, a thoroughbred track car inspired by the AMG GT3 and GT4 racing cars.

To make the GT R even faster, Affalterbach’s engineers amped up every part of the existing car. Gone are the GT R’s regular adaptive dampers, for instance, in favor of coilovers with a higher spring rate and manual adjustment for height, rebound, high-speed compression and low-speed compression. AMG provides what it thinks is an ideal setup from the factory, but racers are encouraged to tweak as they see necessary.

More adjustment is available up front, where there’s a new carbon-fiber anti-roll bar with two-position adjustment. That also cuts 5 pounds of weight. The rear bar remains a steel, three-position adjustable unit, but on the GT R Pro it’s hollow to save weight. More of the car’s control arms now use metal “spherical” mounts instead of rubber bushings, to improve precision at the expense of some noise and vibration. Carbon-ceramic brakes are standard and have higher-friction brake pads than the standard GT R, while the wheels are a special lightweight design.

Aerodynamic change are also myriad, with the Pro boasting an additional 220 pounds of downforce at 155 miles per hour than the regular GT R, two-thirds of which is over the front axle. The obvious places where that downforce was gained include a new front splitter, special dive planes at the sides of the front fascia, a new rear spoiler with an extra Gurney flap and vents in the front fenders to help bleed air out of the wheel wells.

Other tweaks include a new carbon-fiber “shear panel” over the transaxle and differential, which improves torsional stiffness by 7%, and a new carbon-fiber roof with a lowered center channel. A total curb weight for the Pro is not yet available, though the regular GT R coupe is listed at 3,594 pounds.

There’s new electronic tuning for the dynamic engine and transmission mounts, as well as for the rear-wheel steering and electronic limited-slip differential. And for visual differentiation — as if all that aero trickery weren’t enough — you can equip the GT R Pro with a stripe package inspired by AMG’s racing cars.

One place where no fiddling was done was under the hood, as the Pro retains its progenitor’s 4.0-liter twin-turbo, dry-sumped V8 engine and seven-speed dual-clutch transaxle. Output figures remain 577 horsepower and 516 pound-feet of torque.

Objective straight-line performance figures are unchanged from the standard GT R, with the run to 60 miles per hour accomplished in 3.5 seconds and top speed claimed at 198 mph. But it’s on a track that the Pro’s upgrades pay off, with the car claiming a Nürburgring lap time of 7:04.6 minutes, versus the regular GT R’s already impressive 7:10.9.

With just 750 cars to be built globally and only 150 coming to the US, the 2020 Mercedes-AMG GT R Pro will be a rare track-day machine indeed. Pricing has yet to be announced, but with the 2020 GT R listed at $163,895, it’s not hard to imagine the Pro’s sticker getting close to $200K. For all the capability on offer here, that’s a sum that well-heeled track-day enthusiasts should be happy to pay.