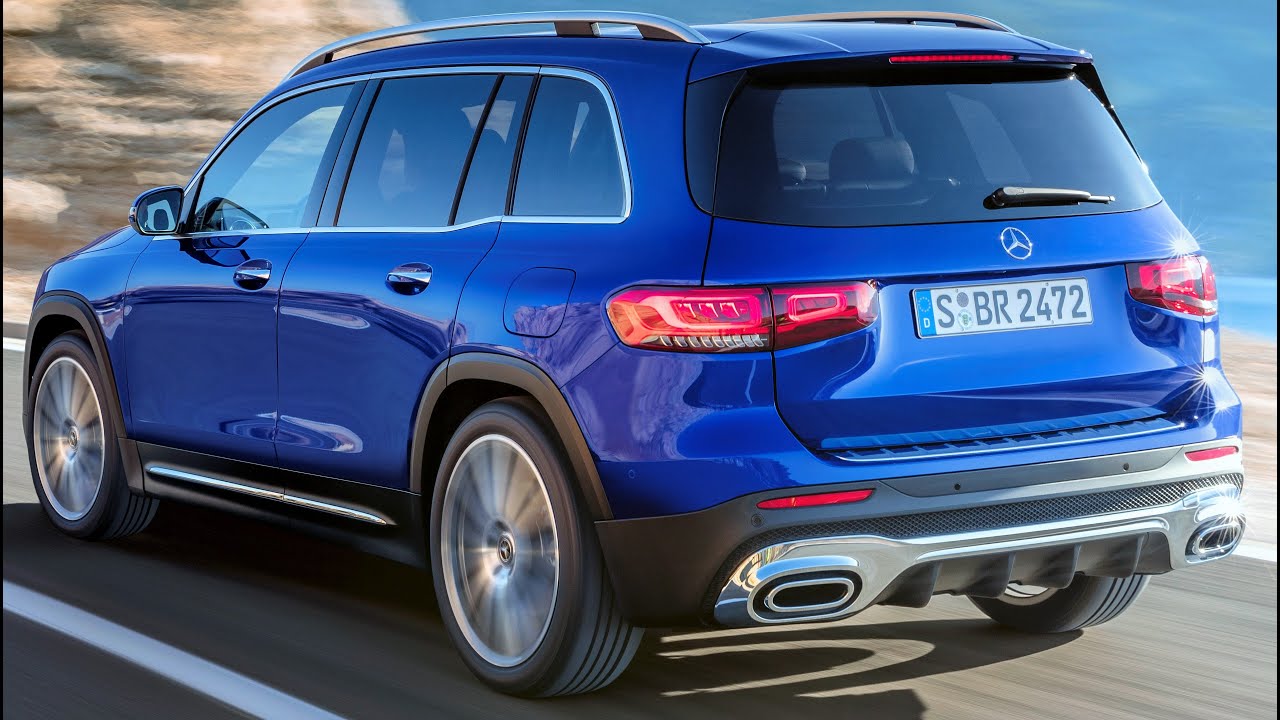 The GLB is the first compact vehicle from Mercedes-Benz to offer a third seat row on request with two additional individual seats. The seats offer people up to a height of 1.68 metres a comfortable amount of space. The extensive safety equipment includes retractable head restraints, seat belts with belt tensioners, a side window airbag which also protects the passengers in the third seat row plus ISOFIX and TOP-Tether anchorages for suitable child seats. These can be used to attach up to four child seats in the rear.

The powerful proportions of the GLB underscore the design with its off-road orientation: the surfaces of the forms are emphasised, and reduced lines and precise seams are major features. The upright front section with its striking headlamps is clear evidence of off-road genes, as are the short overhangs at the front and rear.

The muscular and sensuously contoured vehicle shoulder dominates the side view at the height of the C-pillar, an effect reinforced by the rising waistline. The doors reach over the side bar, improving ease of access, and keep the door apertures free of soiling as well as increasing protection in a side impact. All-round protective claddings divide the overall proportions and emphasise the vehicle’s off-road character, as does the simulated underride guard at the front and rear.

The new GLB places its trust in the four-cylinder petrol and diesel engines which were completely updated to relaunch the compact model series. In comparison to the previous generation, they are characterised by significantly increased power, improved efficiency and emissions.

The gateway to the petrol-model range is the M 282 with a displacement of 1.33 litres in the GLB 200 . This engine has cylinder shutoff for efficient operation in the partial-load range.

The two-litre M 260 engine in the GLB 250 4MATIC has cast-iron cylinder liners in its engine block of diecast aluminium, widening at the lower end as per the CONICSHAPE® principle. In-house the cylinder bore process is descriptively known as “trumpet-honing”. This minimises piston friction and cuts consumption. In the aluminium four-valve cylinder head, the CAMTRONIC variable valve timing system allows two-stage adjustment of the valve lift on the intake side.

Thanks to further extended exhaust gas aftertreatment the two-litre diesel (OM 654q) in the GLB 200 d/GLB 220 d with the 8G-DCT dual-clutch transmission already meets the RDE (Real Driving Emissions) level 2 not obligatory until 2020 and is certified in accordance with Euro 6d.

The instrument panel consists of a single piece, which has optical cut-outs in the driver and front passenger area. The driver faces a widescreen cockpit, with control and display via MBUX (Mercedes-Benz User Experience). A new feature is the characteristic off-road tubular element in an aluminium look which rounds off the lower section of the instrument panel and houses the three round centre air vents. These give the dashboard support an impression of robustness, power and a certain fun factor. Below the nozzles is the air conditioning control panel, whose buttons create the impression that they have been milled from a solid aluminium cylinder.

The robust character of the interior continues in the centre console. Tubular elements in a machined look lend solidity to the design of the components and controls. Along the doors, the SUV character is underlined by the horizontal grab handle that, from the design and equipment line Progressive upwards, forms a robust part of the door panel structure and resembles a machined aluminium tube.

The LED High Performance headlamps and MULTIBEAM LED headlamps are available for the GLB on request. The latter allow extremely quick and precise, electronically controlled adjustment of the headlamps to suit the current traffic situation.

As an option there are also front fog lamps with LED technology. They distribute the light more widely than the main headlamps and thus illuminate peripheral areas better. Their low position in the front bumper helps reduce the risk of dazzling.

4MATIC models include the Off-Road Engineering Package. In combination with MULTIBEAM LED headlamps these models offer a special off-road light function. This makes it easier to see obstacles in rough terrain in the dark. With the off-road light the cornering light on the MULTIBEAM LED headlamps is continuously switched on up to a speed of 50 km/h. This results in wide and bright light distribution immediately in front of the vehicle.