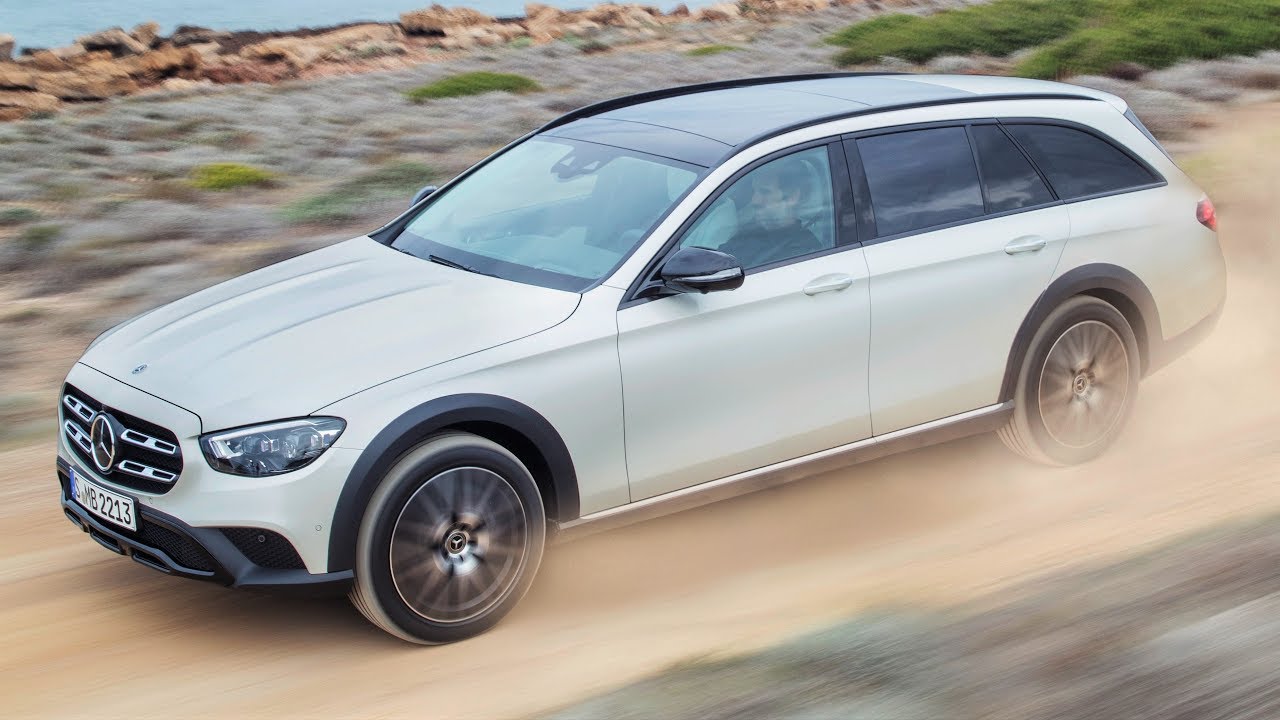 The All-Terrain is visually more similar to the SUV models. In addition, signature All-Terrain components such as the radiator grille or the stylised skid plate now sport a mirror chrome finish rather than the previous silver shadow hue.

The seats combine the hallmark Mercedes-Benz long-distance suitability with avant-garde design. The adaptive driver’s seat adjustment is particularly convenient: When the height of the body is entered on the media display or via Mercedes me, the seat automatically moves into a usually fitting position, which only needs to be fine-tuned by the driver.

The design of the front seats accentuates the sporty aura of the interior. They offer strong lateral support without compromising on comfort. The seat contour follows the pronounced side bolsters and, depending on the specification, the centre section has sporty transverse or modern longitudinal seams. The colours of the centre sections of the seat backrest and cushion are matched to the overall sculpture of the seats. Numerous material combinations ranging from fabric to ARTICO man-made leather to embossed leather to nappa leather with diamond quilting are possible.

The E-Class is fitted with an entirely new steering wheel as part of the model update. It is available in three versions: as an all-leather steering wheel, in a wood-leather combination and in a supersport version. The control surfaces sport a high-gloss black finish, while the trim elements and surrounds have a silver shadow finish. The instrument cluster and the media display are controlled by swiping along the Touch Control buttons. The operating principle of the Touch Control buttons changes from optical to capacitive. A mechanical system was no longer needed, and the touch surfaces also are less susceptible to fingerprints. Whether the driver has control of the steering wheel is now determined by means of capacitive detection (see chapter on the driving assistance systems).

ENERGIZING seat kinetics is another new feature in the E-Class. It supports beneficial changes in seated posture by means of minute movements of the seat cushion and backrest when on a journey.

For the first time, a four-cylinder petrol engine (M 254) with second-generation integrated starter-generator (ISG) producing up to 15 kW of additional output and 180 Nm more torque will complement the engine range. Models equipped with this engine will have a 48-volt on-board electrical system. Thanks to energy recovery and the ability to “glide” with the engine switched off, the petrol engine is highly efficient.

In the M 254, Mercedes-Benz has for the first time combined all the innovations of the modular engine family of 4- and 6-cylinder petrol and diesel units in a single engine. They include the NANOSLIDE® cylinder coating, the CONICSHAPE® cylinder honing (trumpet honing) and the emission control system positioned directly at the engine. A completely new feature is the segment charger with flow connection, an advancement of the twin-scroll technology for even more instantaneous response of the forced induction system. When needed, an electric additional compressor quickly builds up the charge pressure – especially at low combustion engine speeds – and thereby contributes to a highly dynamic throttle response.

The in-line six-cylinder petrol engine (M 256), available for the first time in the E-Class, is also fitted with an ISG. The engine line-up is rounded off by the six-cylinder diesel (OM 656). This engine and the OM 654 four-cylinder version feature an expanded emission control system.

The 9G-TRONIC transmission has also been advanced for the adaptation of the second-generation ISG and in a first step is used with the four-cylinder engine. The electric motor, the power electronics and the transmission cooler have now moved into or to the transmission. Previously required cables are eliminated, which offers advantages with regard to installation space and weight. This makes it easy to combine the transmission with the different combustion engines. In addition, the efficiency of the transmission was increased. Amongst other things, the optimised interplay with the electric auxiliary oil pump reduces the delivery rate of the mechanical pump by 30 percent. Furthermore, it uses a new generation of the fully integrated transmission control with multi-core processor and new construction and joining technology.