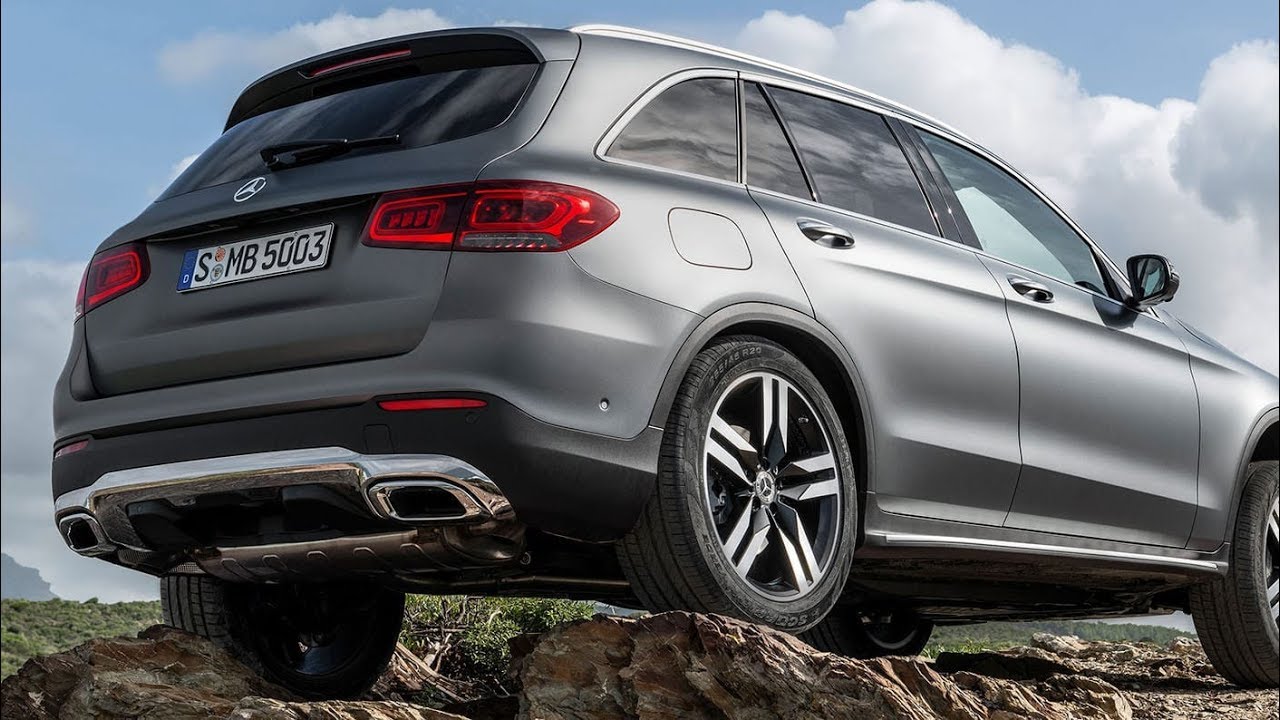 2020 Mercedes GLC SUV facelift and more power. Mercedes is making a lot of news at this year’s Geneva motor show, but the most important—for dealers, at least—may well be the reveal of the refreshed GLC-class small crossover, the brand’s bestselling vehicle in North America. Given that status, it’s perhaps not surprising that the changes are careful ones, with subtly updated styling, engine tweaks, and new in-car technology, although the tech in question is quite significant.

Let’s start outside, where the GLC receives plastic surgery to its front and rear fascias. The upper grille retains its shape but now features filler elements from the larger and redesigned-for-2020 GLE, while the lower section is now a chrome-ringed scowl. The headlights are reshaped and feature standard-fit LED bulbs. Out back, a rearrangement of the taillight elements is the only real change.

Hop in and you might not notice any differences at all, save for some alterations to the trim material on doors and dash. But wait—did you see the infotainment screen? It’s a bit bigger, now measuring 10.3 inches diagonally and featuring touch control. The old dial controller has been replaced by a touchpad, and the steering wheel controls are new. These are your clues that the GLC is now equipped with the Mercedes-Benz User Experience (MBUX) interface introduced in the new A-class, and it’s a significant update.

Among the advantages to this new system are a more intuitive interface and improved voice recognition that incorporates Amazon Alexa/Siri-like functionality whereby you can say “Hey Mercedes” and tell it what you want to know or do. Options include gesture control and Augmented Reality for Navigation, which overlays moving arrows onto a view taken from the front of the vehicle, making it difficult to miss that next turn. Also new is a 12.3-inch digital instrument cluster with high-resolution graphics and animations.

Freshly available driver-assistance technology includes adaptive cruise control that automatically slows for curves and lower speed limits (a feature we’ve sampled in the GLE and have yet to be convinced of its merits). Active Steering Assist provides lane-centering and automated lane changing. Pre-Safe Sound even goes so far as to protect your hearing in a collision by producing a noise that supposedly triggers the protective stapedius reflex in the human ear.

The GLC gets a new version of Mercedes’ 2.0-liter turbocharged four-cylinder engine, now tuned for 255 hp, an increase of 14. Torque is unchanged at 273 lb-ft. Mercedes says fuel consumption will be lower as well, though figures have not been announced. The engine also exhibits improvements in CO2 emissions, which is largely irrelevant in North America but a key consideration for European buyers.

Mercedes will once again offer the regular GLC in rear-drive GLC 300 and all-wheel-drive GLC 300 4Matic forms, with pricing to be announced closer to the on-sale date in late 2019. Expect the technological changes and the reshaped lighting elements to carry over to the GLC 300 coupe, as the coupe and SUV versions of the GLC 43 and GLC 63 AMG, too.