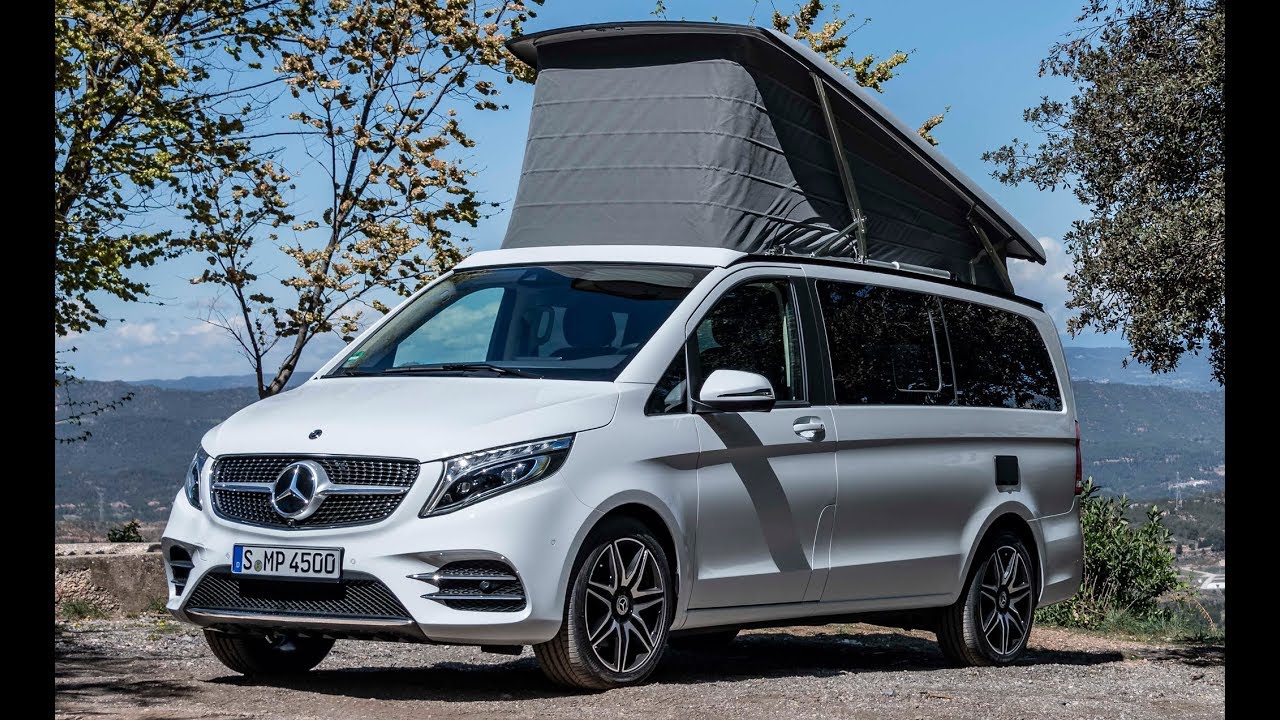 2020 Mercedes V-Class Marco Polo 300 d – A Luxurious Camper Van. For too long, Volkswagen had the factory-built campervan market wrapped up. That all changed in 2017, however, when Mercedes launched the first-generation Marco Polo, based on its V-Class MPV.

Like the standard Mercedes V-Class model, the Marco Polo has just been given a mild mid-life refresh. It gets the same updated bumpers and trim, with Mercedes leaving much of the van-like aesthetic unchanged.

As before, there are two derivatives to choose from: the Marco Polo and the Marco Polo Horizon. Much like its Volkswagen California rival, one version comes with a mini kitchen, and the other does not. The Horizon model (without the gas hob, fridge and sink) is roughly comparable to VW’s California Beach, while the more expensive Marco Polo sits on par with the better-equipped California Ocean.

We tried the pricier Marco Polo, which in Sport trim is expected to start from around £58,000. Basic models will be badged 220 d, but the we tried the faster 300 d. That version will cost around £3,000 more, which incidentally is almost exactly the same amount you’ll pay for a Cali Ocean 2.0 TDI 199PS DSG.

The similarities don’t stop there: it’s clear where Merc has benchmarked its latest camper, as the cupboard, drawer, hob and fridge placements are all almost identical to those you’ll find in the VW. General fit and finish is marginally plusher in the Marco Polo, but in other areas it feels like Mercedes has cut corners in order to keep costs competitive.

The control panel for the electrically operated roof, for example, feels as if it has been fitted as an afterthought; the VW’s unit is better integrated, though both are easy enough to use. If you want to stand up in the back, you’ll notice the Marco Polo’s top deck needs to be clipped in place by hand, whereas the Cali’s set-up uses a pair of hydraulic struts, with the raised bed fixing in place automatically.

On the whole, however, the Mercedes is a wonderfully thought-out and practical place to be. The roof raises, making the space beneath ready use in just 30 seconds, and there are LED lights and zip blinds up top. The soft-close cupboards are a nice touch, and the airline-style drawer at the rear is useful for all the odds and ends you’ll inevitably need on a family holiday. There’s plenty of space to stretch out, and quality is fantastic – both up front and in the back.

Start the engine and the new 2.0-litre diesel engine is notably more refined than the old 2.1-litre unit, while the nine-speed auto box is immeasurably keener than the previous version’s seven-speed set-up. Our 300 d rectifies our complaints about the old 220 d feeling a bit lethargic – it’s significantly faster than anything offered by VW, and handles the Marco Polo’s added bulk with ease.

You can feel that extra weight on the road, though. The Marco Polo weighs around 175kg more than a long wheelbase V-Class before you add all your camping kit, and that takes its toll on the van’s handling. The steering is still absent of any kind of feedback, and the body seems to roll more significantly through tight bends. Grip is good, but slow and steady is the name of the game – not least because you’ll soon grow tired of the pots, pans and china mugs crashing around in the back.

No Marco Polo owner is likely to throw their camper up a snaking switchback, of course, but it’s nice to know how it’d cope if the situation arose. Vans like these will be driven on all sorts of terrain – from motorways and mountain roads to city streets and country lanes, after all.

It’s very nearly as quiet as the standard V-Class at a cruise, and just as easy to drive in town. Like in the normal model, you sit lower than in the equivalent VW, which means the view of the road isn’t quite as good. The Mercedes does feel less cumbersome as a result, though.