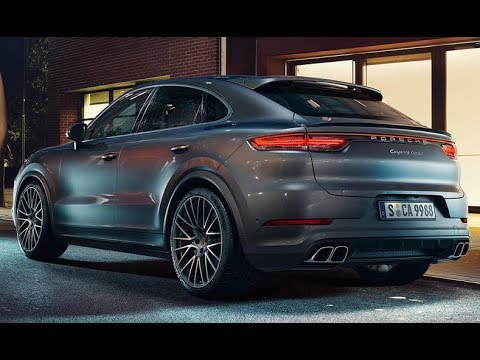 2020 Porsche Cayenne Turbo Coupe – Interior, Exterior and Drive. When Porsche builds an SUV, it’s looking to lay legitimate claim to having the sportiest one in its class. But the Cayenne was missing one selling point that its competitors had: a sportier-looking “coupe” model like the BMW X6, the Mercedes-AMG GLE coupe, and now even its Audi Q8 sister model. It was time to fix the situation, not least because the regular Cayenne looks a bit too similar to its predecessor.

So Porsche’s designers went to the drawing boards and came up with a variation of the Cayenne theme that is, at least in appearance, as close to an actual sports car as a fully grown SUV can be. Identical to the regular Cayenne only up to the A-pillar, the Cayenne coupe features a lower, sloping roof that evokes the classic 911 side windows and rear. The taillights sit at a different angle, and the rear fenders are fatter than on the regular Cayenne: The coupe is 0.7 inch wider and 0.8 inches lower.

A panoramic glass roof is standard, while a full high-gloss carbon-fiber roof comes as part of an option package. No regular roof is offered, which is a good thing. The Cayenne coupe looks far better with a dark roof section, which effectively masks its bulbous shape that’s an effort to improve headroom. The protruding roof spoiler also serves purely cosmetic purposes. It’s actually the lower Gurney-type flap, which sits atop an entire tail section that rises at speed, that helps to keep the Cayenne’s tail planted to the road.

Porsche’s transformation of the Cayenne, albeit modest, is still arguably more successful than BMW and Benz’s coupe versions of their current SUVs, in large part because of the Cayenne’s more graceful execution of the lowered tail.

The trunk is slightly smaller: In the non-turbo model, it shrinks from 27 to 22 cubic feet, and to preserve as much rear headroom as possible, the laterally adjustable rear bench is forfeited in favor of a fixed bench that is positioned 1.2 inches lower. That bench, by the way, is shaped like two single seats, but a true three-seat bench is available as well.

Porsche has chosen to make the coupe available across the board, but it will initially only come with the 340-hp turbocharged 3.0-liter V-6 as the Cayenne coupe and with the 550-hp twin-turbo 4.0-liter V-8 as the Cayenne Turbo coupe. Performance is identical to the regular Cayenne with the Sport Chrono package, which is standard here. Further models, such as the Cayenne S, the Cayenne E-Hybrid, and the upcoming Turbo S E-Hybrid, will be offered in coupe form as well. What won’t be offered is a diesel Cayenne coupe—even though there is space for that hypothetical urea filler cap next to the fuel cap. Oh, well. Audi blew that one.

The Cayenne coupe comes with some extra equipment over the regular Cayenne. Beyond the panoramic roof, standard equipment includes goodies like eight-way power seats, 20-inch wheels, the Sport Chrono package, Porsche Active Suspension Management (PASM), and parking assist. Prices start at $76,550 for the Cayenne coupe, a premium of $9600. The Cayenne Turbo coupe comes in at $131,350, which is $5500 more than the regular Cayenne Turbo. Discount the extra equipment, and there isn’t much of a premium for the coupe.

One of the most popular options will likely be the lightweight sport package, which comes in the vehicle color, matte, or carbon fiber; in all three versions, the gloss-black carbon-fiber roof is included, but there is also a performance exhaust, Alcantara trim, sport seats with specific retro-themed patterns, the exterior design package, and a set of 22-inch GT wheels. The packages will come in at around $10,000 to $15,000. Look for the Porsche Cayenne coupe at U.S. dealers from mid-October onward.