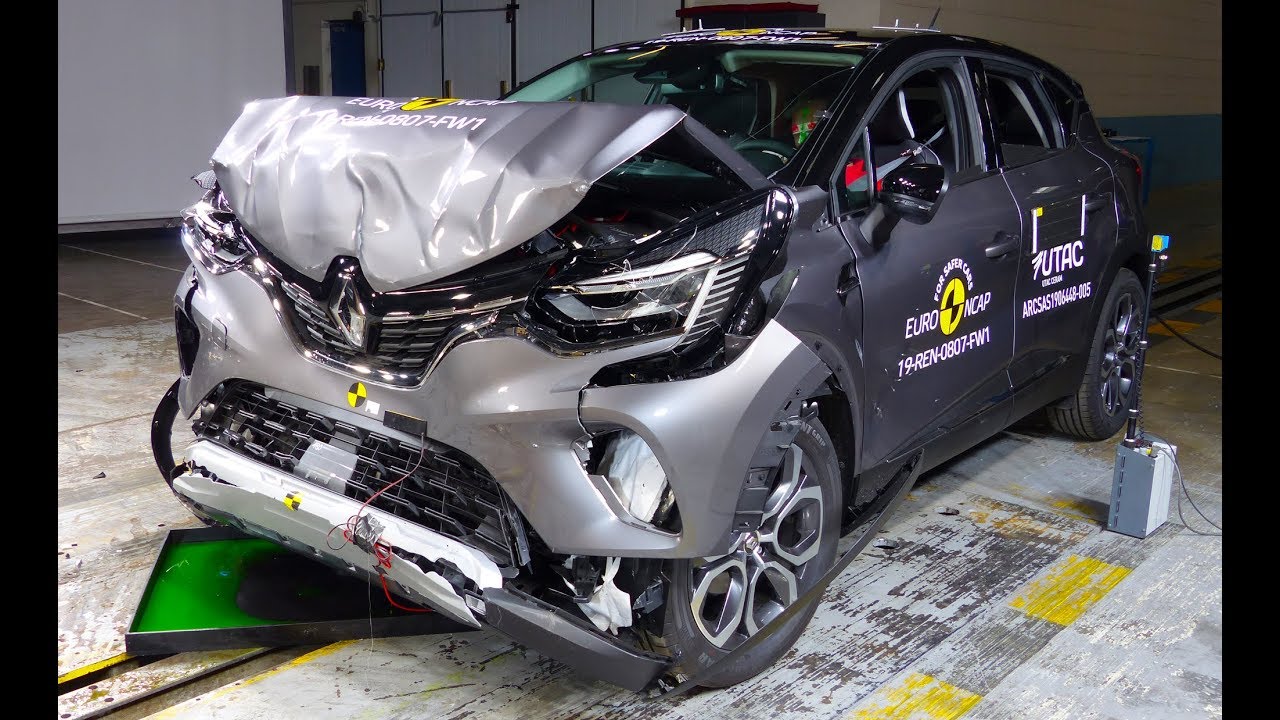 ADULT OCCUPANT
The passenger compartment of the Captur remained stable in the frontal offset test. Dummy readings indicated good protection of theknees and femurs of the driver and passenger. Renault showed that a similar level of protection would be provided to occupants ofdifferent sizes and to those sitting in different positions. Protection was rated as good for all critical body areas for the passenger. In thefull-width rigid barrier test, protection was good or adequate for all critical body areas, both for the driver and the rear passenger. In theside barrier impact, protection of all critical body areas was good and the car scored full points in this test. Even in the more severe sidepole test, protection of the chest was adequate and that of other body regions was good. Tests on the front seats and head restraintsdemonstrated good protection against whiplash injuries in the event of a rear-end collision. A geometric assessment of the rear seats alsoindicated good whiplash protection. The standard-fit autonomous emergency braking (AEB) system performed well in tests of itsfunctionality at the low speeds at which many whiplash injuries occur, with collisions avoided in most test scenarios

CHILD OCCUPANT
In the frontal offset test, protection was good or adequate for all critical parts of the body, for the 6 and 10-year dummies. The frontpassenger airbag can be disabled to allow a rearward-facing child restraint to be used in that seating position. Clear information isprovided to the driver regarding the status of the airbag and the system was rewarded. The vehicle handbook says that the rear centreseat is not suitable for a universal child restraint, so the installation assessment was deemed a fail. Otherwise, all restraint types for whichthe Captur is designed could be properly installed and accommodated

VULNERABLE ROAD USERS
The protection provided by the bonnet to the head of a struck pedestrian was good or adequate at almost all test locations on the bonnet.The bumper provided good protection to pedestrians’ legs but protection of the pelvis was generally weak or poor. The Captur’s AEBsystem can detect vulnerable road users like pedestrians and cyclists, as well as other vehicles. In tests of its response to such roadusers, the system performed well, collisions against both being avoided or mitigated in all test scenarios.

SAFETY ASSIST
The Captur has a seatbelt reminder system for the front and rear seats. The AEB system performed adequately in tests of its response toother vehicles at highway speeds. A lane support system helps prevent inadvertent drifting out of lane. A speed assistance system uses acamera mapping to identify the local limit and the driver can choose to allow the car to adjust the speed limiter accordingly.