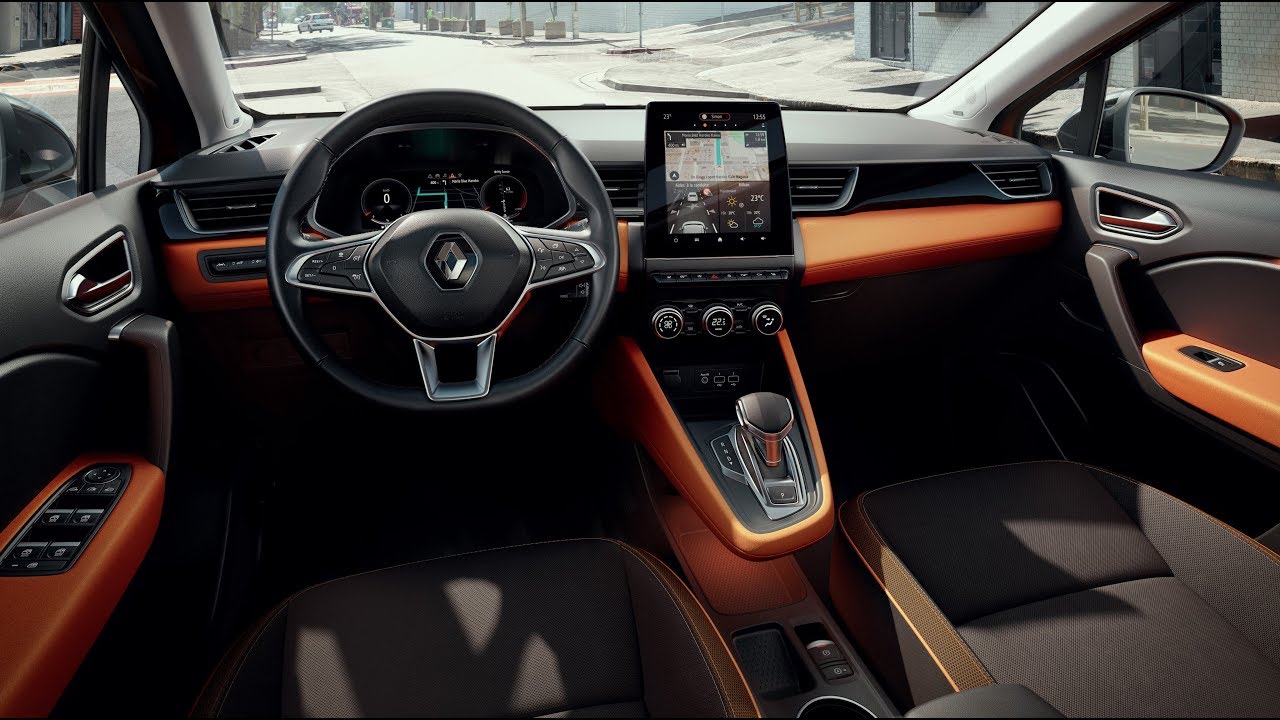 2020 Renault Captur SUV INTERIOR. Although buyers of small SUVs have the automotive equivalent of the Argos catalogue to choose from these days, the Renault Captur remains an enduringly popular choice in the UK – so much so, in fact, that Renault sold more Capturs last year than it did when the car was first launched in 2013. And with this new, second-generation version, the French brand will be hoping for a repeat performance.

Based on the same underpinnings as the new Clio small hatchback, the latest Captur is longer than the car it replaces and features a chunkier look, with a wider grille at the front and more plastic body cladding around its lower edges. LED headlights are also standard for the first time, while buyers have 90 possible colour combinations to choose from for the car’s body, roof and trim pieces.

Interior
It’s inside, though, where the biggest changes have been made, most notably the introduction of a new infotainment screen (up to 9.3in in size) taken from the Clio. The portrait-oriented screen is angled both upwards and towards the driver in a bid to make hitting icons for the sat-nav or entertainment functions while driving easier. It also offers Android Auto and Apple CarPlay smartphone mirroring. Below the screen you’ll find storage spaces for your odds and ends, as well as a wireless charging pad. Two USB charging ports are hidden under the centre armrest.

A digital instrument panel of up to 10.0in in size replaces conventional dials and can put important information such as directions from the sat-nav directly in front of your eyes.

The Captur’s seats have been redesigned, too, with longer bases and a more supportive shape. Those in the rear benefit from a small increase in leg room – something the old Captur struggled with.

This Captur’s extra length has also gone into improving boot space, which now stands at 536 litres if you pull the sliding rear bench all the way forwards – far more than any of the Captur’s rivals. Still, even with the rear bench slid back, expect a couple of large suitcases to fit. Split-folding rear seatbacks and a height-adjustable boot floor also feature.

Engines
Like the Clio, the Captur will be available as a plug-in hybrid. Due to arrive later next year, the Captur E-Tech can travel for up to 28 miles on electric power alone at speeds of up to 83mph. Power comes from a 1.6-litre petrol engine and two electric motors, which together produce around 150bhp. Renault says that thanks to strong regenerative braking, which sends energy normally lost when you slow down back to the battery, it should be possible to drive this Captur using just one pedal.

For now, though, buyers will have three petrol and two diesel engines to choose from, with a 99bhp 1.0-litre petrol kicking off the range. Drivers seeking more power have a 1.3-litre petrol in both 128bhp and 153bhp guises to choose from, while drivers covering enough miles to justify a diesel can go for either a 94bhp or 113bhp 1.5-litre unit. Gearbox options are a six-speed manual or seven-speed automatic. No WLTP emissions or CO2 data has been revealed yet.

The Captur is available with the latest driver assistance systems, including adaptive cruise control, a self-parking system, automatic emergency braking with pedestrian and cyclist detection and a system that allows the car to control its own steering, acceleration and braking on the motorway.

Price
The Captur’s pricing won’t increase dramatically compared with that of the outgoing car, but a starting price of around £16,500 would make the new model slightly less costly than the class-leading Volkswagen T-Cross and significantly cheaper than Seat’s Arona.