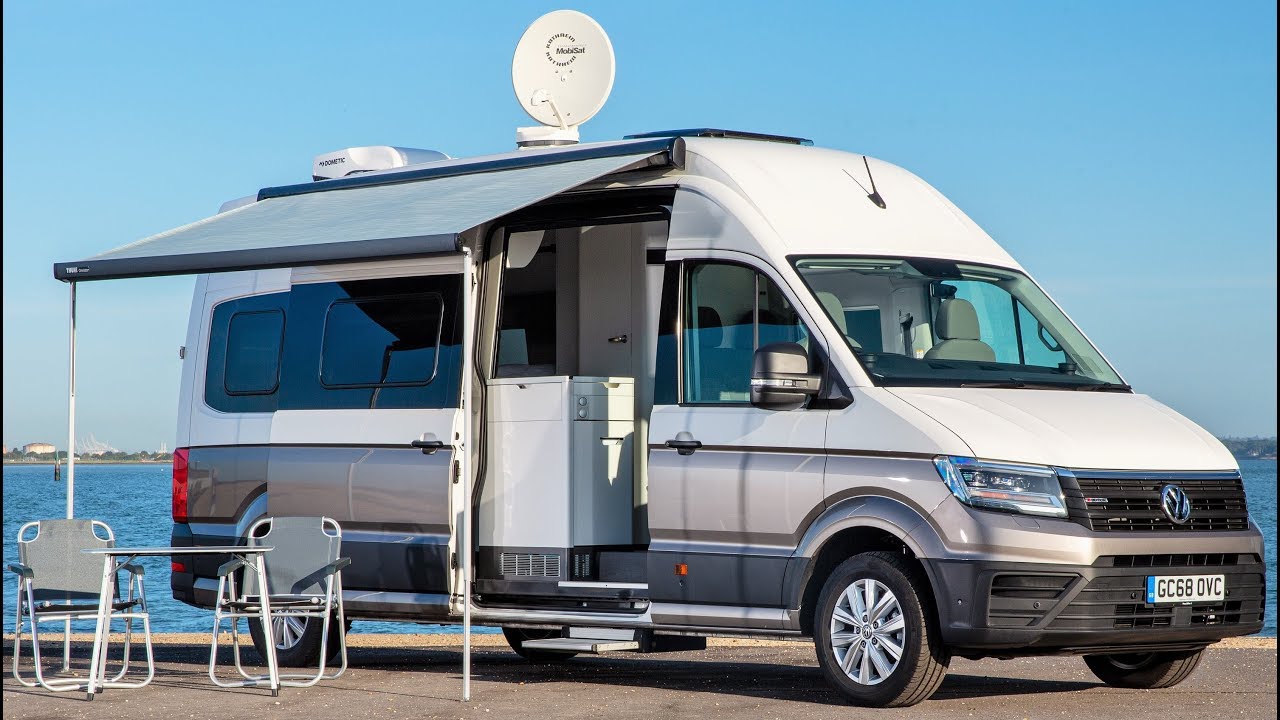 The Grand California comes as standard with front-wheel drive, or with the 680, the option of 4MOTION four-wheel drive. One engine is available: a highly modern, high torque four-cylinder turbodiesel direct-injection (TDI) optimised for low emissions and delivering maximum power of 177 PS and torque of 410 Nm. An eight-speed automatic gearbox is standard. A combination of SCR catalytic converter, particulate filter and oxidising catalytic converter ensures that the Grand California fulfils the latest emissions standards.
With 4MOTION four-wheel drive, the Grand California can take on the grandest of adventures in different weather conditions and on challenging terrains. In this case, a multi-plate clutch seamlessly distributes drive system power between front and rear axle. In normal situations power is delivered primarily to the front axle to save energy. However, as soon as there is a risk of losing traction, the rear axle is smoothly engaged in a fraction of a second. In addition to this it is also possible to have the new campervan supplied with a differential lock.

The Grand California is available in two different versions: a six-metre version – the 600 – with double bed (transverse sleeping) at the rear and additional optional overcab bed for children in the roof; or a 6.8-metre variant – the 680 – with larger sleeping area (longitudinal) for two adults.

The Grand California 680 is 6,836 mm long and fitted with a Crafter high roof. On this model the wheelbase between axles measures 4,490 mm. While the width is identical to that of the Grand California 600, the height, depending on configuration, measures from 2,839 to 2,967 mm with corresponding headroom between 1,970 and 2,030 mm.

By virtue of the longer rear section, the Grand California offers more space in the back, with a larger, longitudinal double bed sleeping area which measures 2,000 x 1,670 mm on the right and 1,900 x 1,670 mm on the left. This makes it an especially luxurious camper with lots of room for two people on long journeys.

The beds in the rear sleeping area of both models are fitted with an 80 mm thick mattress on a spring plate sub-construction. It can in each instance be folded up to the side and is clipped in place via two straps and buckles on each side.
Underneath it is a large storage space that is secured by a two-piece (removable) partition. The side storage space in the rear of the Grand California measures 180 litres. The Grand California 680 offers more capacity here, as it has an additional floor-level cabinet towards the living area and a roof-level cupboard on the driver’s side.

In total, the Grand California 600 has four floor-level cupboards in the rear. One is pure storage space, two house the gas bottles and the drinking water tank while the fourth is fitted out as an equipment cupboard. Inside it are the FI circuit breaker switch, a battery cut-off switch, the relief valves for the water system and the subwoofers of the optional sound system.

The Grand California 680 is additionally equipped with two further cupboards for storage. Access to the rear cupboards is either via the living area or via the rear wing doors (1,522 x 1,740 mm). Its opening is so big that even sports equipment and bicycles can be loaded with ease. Available as an option is a bicycle rack on the rear wing door for transporting two bicycles (35 kg load capacity). The living space opens out through the large, side sliding door (1,311 x 1,620 mm). An electrically powered step (fitted as standard), which moves out in front of the door, makes getting in and out easier.

Being based on the Crafter, the Grand California comes with a raft of driver assistance and comfort features. These include standard Front Assist with City Emergency Braking function, Cross Wind Assist and Hill Start Assist, along with front and rear parking sensors, plus the option to add Lane Assist to help the driver stay in lane, Blind Spot Monitor for changing lane, Rear Traffic Alert for reversing out of parking spaces and Park Assist for steering into them, the sensor-controlled side protection system, Adaptive Cruise Control and a Rear View reversing camera.