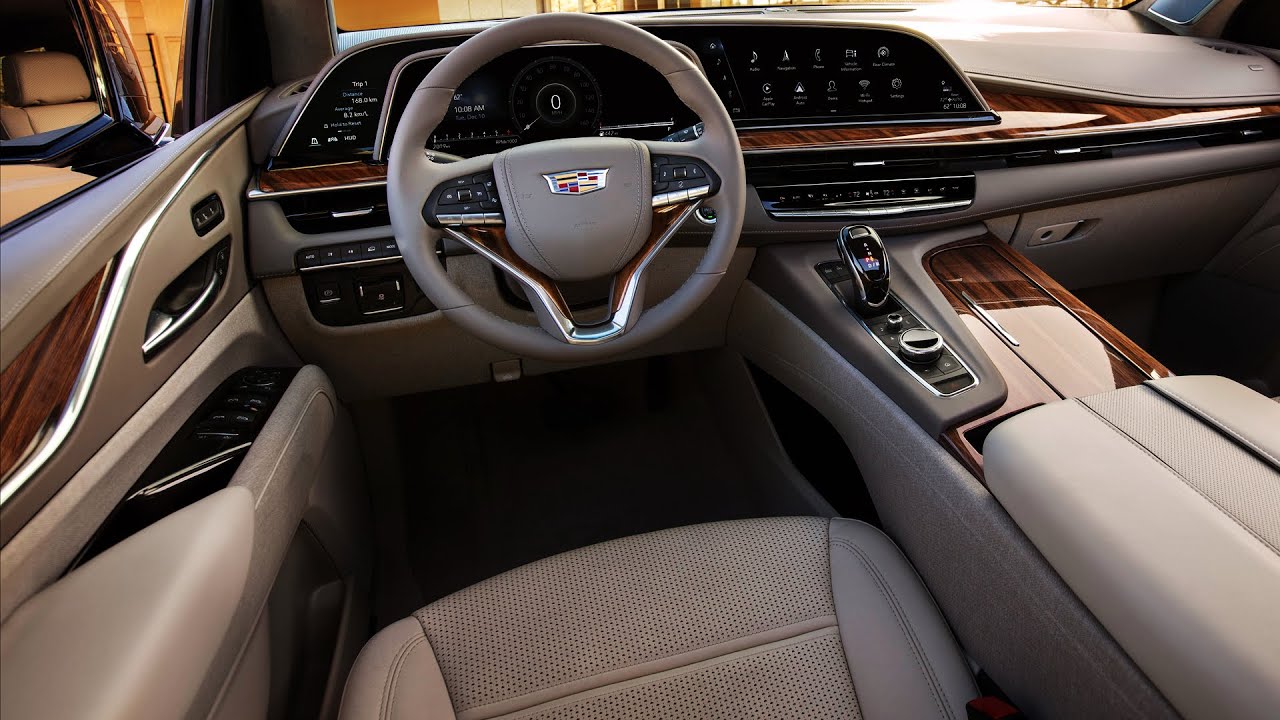 2021 Cadillac Escalade INTERIOR – Awesome Large Family SUV. Cadillac’s Escalade SUV is a king-sized luxury luminary, and the debut of an all-new version goes beyond simple car introduction to full-scale cultural event. Now in its fifth generation, what was once a rebadged GMC Yukon has become a distinctively styled flagship, albeit one that still shares its basic mechanicals with that GMC as well as the Chevy Tahoe. But General Motors has worked hard to ensure its latest batch of full-size SUV triplets are fraternal rather than identical, an effort most apparent inside the Escalade’s decadent cabin.

We’ll get to the rest of the 2021 Escalade in a minute, but this rig really is all about its interior, a tech- and feature-dense cocoon that finally befits a six-figure luxury SUV—at least in the top-spec Premium Luxury Platinum model.

The star of the show is the massive OLED screen—all 38.0 inches of it—that’s subdivided into three distinct sections ahead of the driver. There’s the 7.2-inch capacitive menu panel to the left of the steering wheel, the 14.2-inch display that serves as the instrument cluster, and the incredible 16.9-inch screen perched atop the center stack. All are contained within one arcing frame with an illuminated crystal Cadillac emblem on its rear face. The clever packaging of the displays, as well as the tonally warm strips of wood placed near the screens, help the Escalade avoid the cold, clinical feel of other models featuring vast amounts of digital real estate. We’re looking at you, Mercedes.

The entire infotainment system is responsive, intuitive, and easy to operate. Features such as augmented-reality navigation in the instrument cluster, smartphone-like touch controls that are properly responsive, high-res night vision that marks pedestrians, and a massive amount of personal customization are at minimum state of the art in luxury-car gadgetry and at most really friggin’ cool. A rotary knob on the center console can also be used to control the main screen, a welcome touch for those who prefer physical switchgear. The imagery on the curved OLED displays—which are about as thick as a sheet of paper and twice as pixel-dense as a 4K television—is beautifully vibrant and clear.

Those descriptors apply, too, to the AKG audio systems. Our review Escalade had the 36-speaker, 28-channel Studio Reference system, and everything from jazz to pop to indie rock to classical sounded deep and rich. (A 19-speaker, 14-channel AKG Studio setup is standard.) A 360-degree sound stage and custom programming allows individual instruments and elements to clearly occupy a space inside the vehicle, whether that’s to the front, sides, or rear. A similar function also allows navigation instructions to be given from the direction of the turn ahead; need to make a right, and you’ll hear it from the right side of the vehicle.

As in GM’s other full-size SUVs, the Escalade offers a lot more interior space thanks to stretches in overall length and wheelbase, as well as a move to an independent rear suspension. There’s a 68 percent increase in cargo space behind the third row—you can now fit more than a couple of pool noodles—and 41 percent more legroom in the way-back, and Cadillac claims more cargo space in any seat up or down configurations than any other vehicle in its class. Additional space is of course available in the long-wheelbase ESV version, which costs $3,000 more than an otherwise identical standard model.

We can’t emphasize enough what an incredible job Cadillac has done with the interior design and quality. Buyers can variously choose from nine interior colorways, four seat stitch patterns, and seven different (real) woods, and the material selection and the way in which they’re combined is tasteful and elegant—a huge leap forward from the riot of joints and seams in Cadillac’s last-generation models.

In the Platinum, leather wraps nearly everything that isn’t brightwork, a screen, or a switch, and the overall aesthetic even manages to elevate some of the parts-bin pieces shared with lesser GM vehicles. Shiny, hard plastics are used sparingly and thankfully in places you’ll rarely notice them, while careful detailing (like perforations that echo in the upholstery, speaker grilles, and dashtop) prove Cadillac’s sweating the small stuff. All good news for a luxury SUV that cost $109,965 as equipped, which isn’t exactly clowning around money.

The Escalde’s starting price. Standard models start at $77,490, with the longer ESV version starting at $80,490. Both prices include $1,295 in destination and delivery charges.