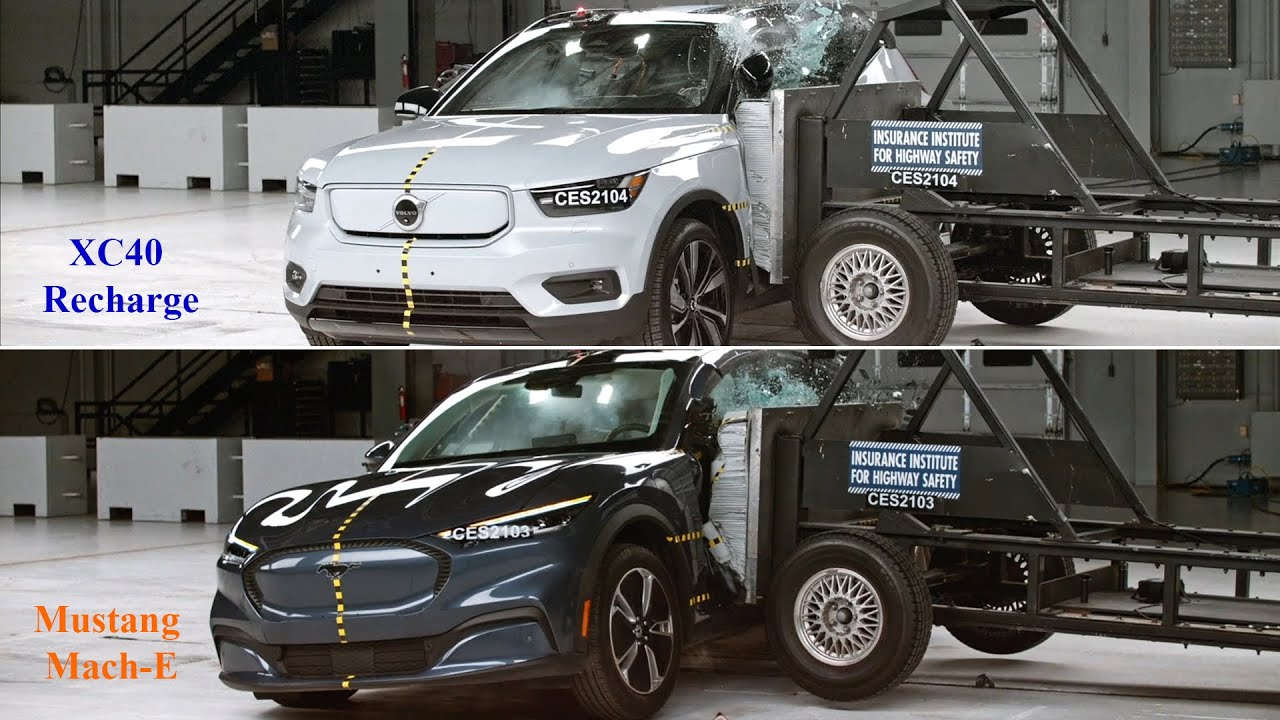 2021 Ford Mustang Mach-E VS 2021 Volvo XC40 Recharge / IIHS crash test. Evidence is growing that electric vehicles are at least as safe as conventional ones, with two more vehicles that run exclusively on battery power earning safety awards from the Insurance Institute for Highway Safety. In addition, an updated analysis of insurance data shows injury claims are substantially less frequent for such vehicles.

“It’s fantastic to see more proof that these vehicles are as safe as or safer than gasoline- and diesel-powered cars,” says IIHS President David Harkey. “We can now say with confidence that making the U.S. fleet more environmentally friendly doesn’t require any compromises in terms of safety.”

The 2021 Top Safety Pick award requires good ratings in all six IIHS crashworthiness tests — driver- and passenger-side small overlap front, moderate overlap front, side, roof strength and head restraints. Winners must also be available with good or acceptable headlights and a front crash prevention system that earns advanced or superior ratings in both the vehicle-to-vehicle and vehicle-to-pedestrian evaluations. To qualify for the “plus,” vehicles must come with good or acceptable headlights across all trim levels and packages.

The Mach-E is available with good-rated LED projector headlights on the Premium, GT and First Edition trims, which qualify for Top Safety Pick. However, the LED reflectors installed on the Select and California Route 1 trims are rated marginal, preventing the new Mustang from earning the “plus.” These headlights provided inadequate illumination on some curves.

The Mach-E also comes with a standard front crash prevention system that earns superior ratings in both the vehicle-to-vehicle and vehicle-to-pedestrian evaluations.

The new awards for the XC40 Recharge and the Mustang Mach-E coincide with a recent study of insurance losses for electric vehicles by the IIHS-affiliated Highway Loss Data Institute that provides additional evidence about the safety of EVs. The HLDI analysis doesn’t include these two vehicles but highlights loss trends for EVs overall.

The study looks at electric and conventional versions of nine models from 2011 to 2019, yielding more than twice as large a sample as a previous study conducted in 2017. It examines collision, property damage liability and injury claims.

The updated data show that rates of injury claims related to the drivers and passengers of electric vehicles were more than 40 percent lower than for identical conventional models over 2011-19. This result is similar to an earlier HLDI study of hybrid vehicles, and one likely explanation is that the large batteries used in both types of vehicles make them substantially heavier than their conventional counterparts. Occupants of heavier vehicles are exposed to lower forces in multivehicle crashes.