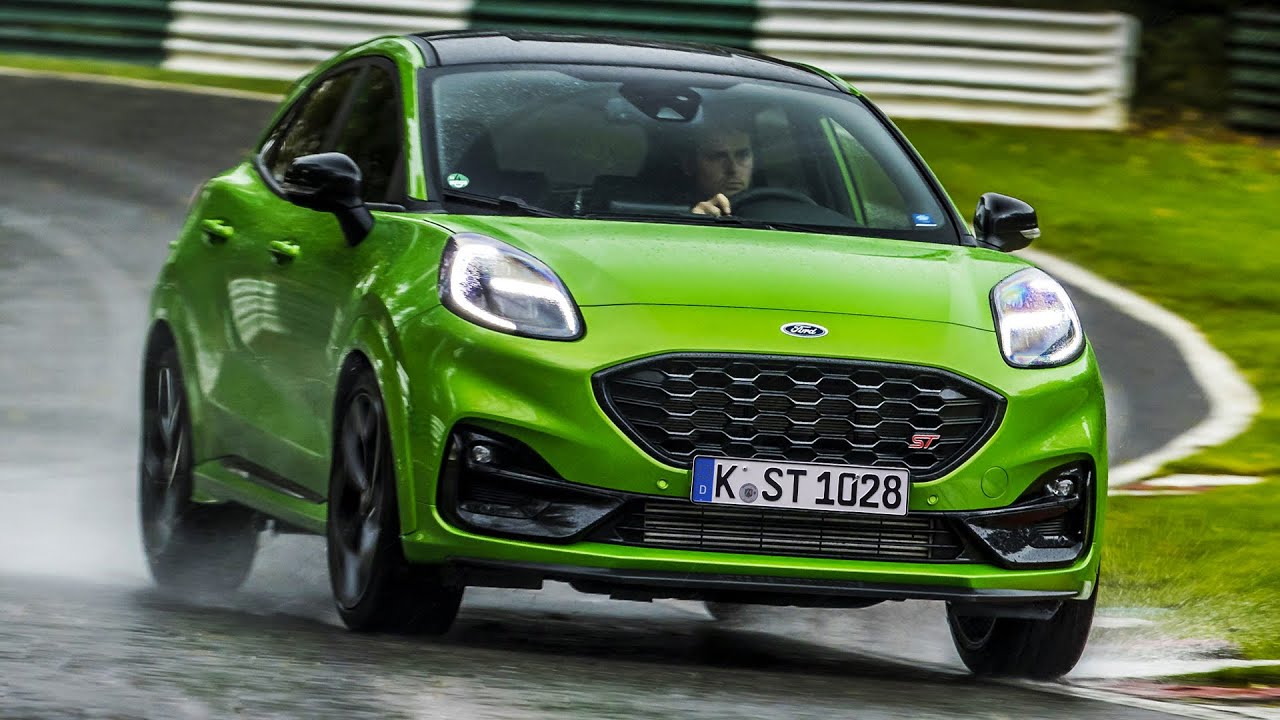 You’ll have a hard time spotting the cosmetic upgrades fitted to the new Ford Puma ST. The front bumper looks almost identical to a standard Puma ST-Line, with only a subtle ST badge, black-painted trims beneath the foglights and a thin black splitter extension marking out the more exciting model.

It’s a similar story from the side, where the Puma ST comes with 19-inch alloy wheels instead of the standard Puma ST-Line’s 17-inch rims, but that’s about it. The differences are more obvious at the back, where the new Ford Puma ST gets twin exhaust tips (just like the Fiesta ST) and a black lower bumper trim instead of the ST-Line’s body-coloured piece.

More exciting than how it looks is what’s going on under the new Ford Puma ST’s bonnet. It gets the same 1.5-litre turbocharged three-cylinder petrol engine as the rorty Fiesta ST, so it produces 200hp and 320Nm of torque.

This power is sent through the front wheels via a six-speed manual gearbox. Nail every gear change and it’ll do 0-60 in less than 6.7 seconds – that’s 0.2 seconds slower than the Fiesta ST but still rapid for a small SUV. Ford says the Puma will reach a 137mph top speed and return around 40mpg.

The Ford Puma ST gets suspension that’s firmer, lower and comes with thicker anti-roll bars than the standard Puma’s. The ST model also features a mechanical limited-slip differential that’ll help it muster up more grip when you accelerate hard out of a bend.

There are four driving modes to choose from, Eco, Normal, Sport and Track. As you progress through these modes the Puma ST’s throttle response is made more immediate and the electronic stability program allows the tyres to slip more before cutting the engine’s power or engaging the brakes.

The Puma ST will come with an optional launch control system. To use this, you put the car in first gear, press the clutch, floor the throttle and release the clutch. The car’s onboard systems then manage the traction control automatically to help you make the fastest getaway.

The biggest upgrade you’ll spot in the new Ford Puma ST’s interior is the Recaro sports seats that are more supportive than the ones you get in the standard Puma. You also get a flat-bottomed ST-branded steering wheel, ST-branded gear knob and ST-branded door sill protectors. Have you spotted a theme yet?

The standard Puma’s infotainment system has been carried over unchanged, so you get a 12.3-inch digital driver’s display and an 8.0-inch central display with built-in sat-nav, Apple and Android smartphone mirroring and a wireless phone-charging pad. The Puma ST gets the same 456-litre boot as the standard Puma with the waterproof and drainable ‘Megabox’ underfloor storage area.