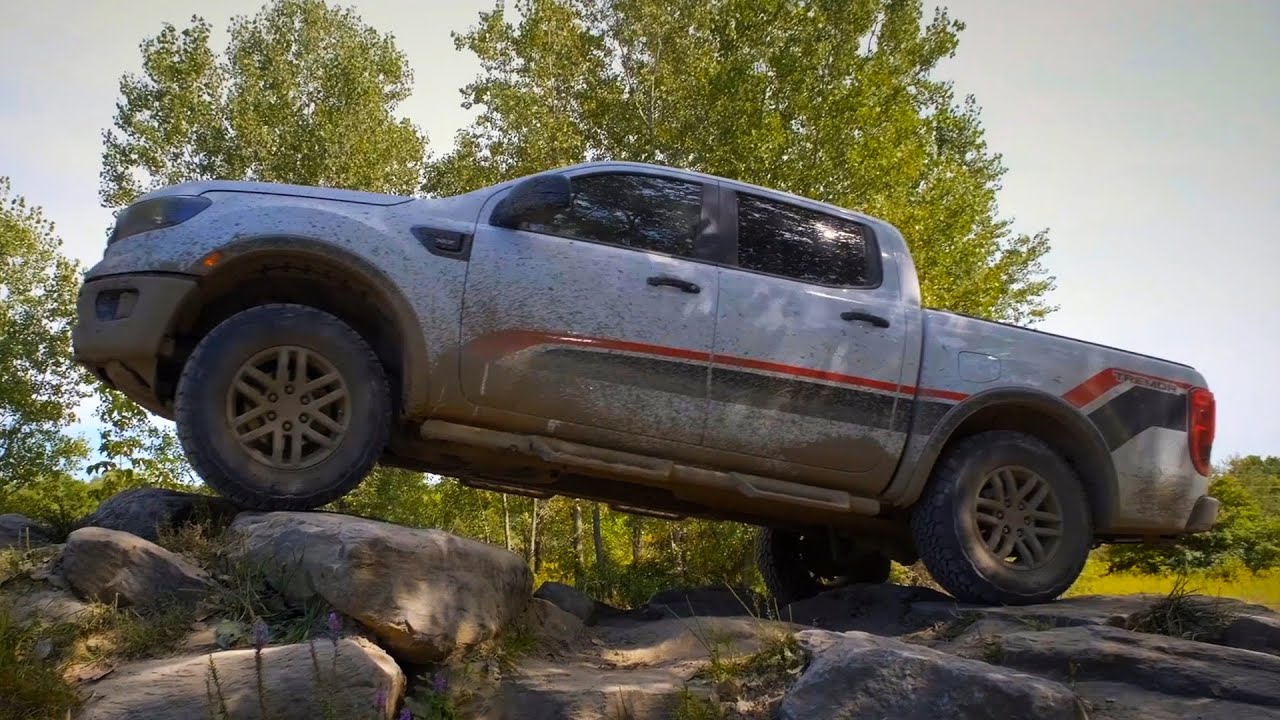 The Tremor pack will be available on the Ranger’s XLT and Lariat trims for an extra $4,290. The Ford F-Series Super Duty already has its own Tremor package, but it’s geared more towards hauling heavy things out to remote locations. In fact, Ford outfitted all its Super Duty support trucks with the Tremor package to chase the Bronco R in last year’s Baja 1000. The Ranger, however, seems to be more about off-road shenanigans than overall practicality. Again, not Raptor-sized shenanigans, but more fun than you can currently have with the Ranger FX4.

The Ranger Tremor gets Fox 2.0 monotube shocks with rear piggyback reservoirs for better cooling. These shocks have a progressive rebound and hydraulic stops, so the truck shouldn’t bounce around too much when the whoops get deep. The front coils and rear leaf springs get a different tune and the anti-roll bar is relaxed just a tad, so in theory, drivers and passengers shouldn’t get their teeth rattled out. This also increases the Ranger’s suspension travel to 6.5 inches up front and 8.1 inches at the rear.

General Grabber 32-inch tires wrap around 17-inch gray-painted wheels. Together these add an inch more width than a standard Ranger. There’s no dedicated suspension lift, per se, but the wheel and tire package adds nearly an inch of ground clearance when compared to a stock Ranger, topping out at 9.7 inches. The truck’s approach, departure and breakover angles are also improved, up to 30.9 degrees, 25.5 degrees and 24.2 degrees, respectively.

A rear differential locker is included in the package to help get the truck up and over rocks, and Ford says the traction control is recalibrated for better grip on slippery surfaces including gravel. Inside, you’ll find six auxiliary switches with anywhere from 5 to 25 amps. Finishing out the package are skid plates, rear-recovery hooks and side steps.

Visually, the Tremor distinguishes itself by the aforementioned tires, a unique grille and, of course, all those badges. Hood and body graphics will be available, too. Normally I’m kind of meh on this kind of stuff but, hot damn, the Ranger Tremor looks good.

Nothing changes under the hood. The Ranger still uses the same 2.3-liter EcoBoost four-cylinder engine as before, with 270 horsepower and 310 pound-feet of torque, mated to an excellent 10-speed automatic transmission. Ford’s Terrain Management system is on hand with Normal, Grass/Gravel/Snow, Mud/Ruts or Sand modes, as well as Trail Control, which is like a super-slow-speed off-road cruise control. Like other Rangers, the Tremor can tow 7,500 pounds, but payload is down just a bit, to 1,430 pounds. That’s just 130 pounds, but hey, that’s an extra spare tire and 10 gallons of gas.

While we’re stoked that Ford is offering this Tremor package, we’re still praying for a Ranger Raptor to hit our shores soon. Until then, the Tremor package will be available on 2021 Rangers starting early next year.