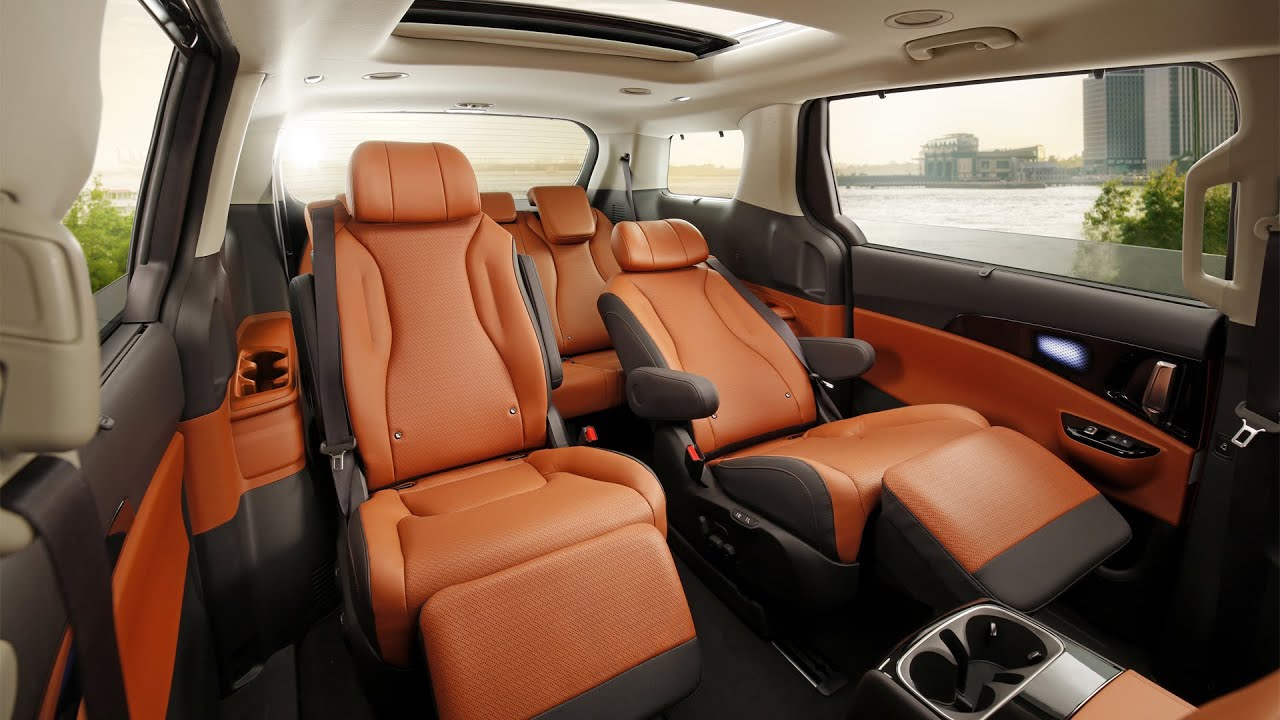 2021 Kia Carnival — Bigger and Upscale everywhere with SUV inspired design. The rise of crossovers and SUVs has greatly impacted demand for minivans, but Kia is confident the family hauler still deserves a spot in the company’s ever-growing lineup. Following a couple of previews, the fourth-generation minivan has been revealed in full as the Carnival for domestic market South Korea, but the US-spec Sedona should look virtually the same inside and out.

Speaking of SUVs, the new model is being described by Kia as a “Grand Utility Vehicle” courtesy of an exterior design that takes after sport utility vehicles to bank on the huge demand the segment is enjoying. It’s larger than before, with overall length increasing by 40 mm (1.57 inches) to 5155 mm (203 inches) while the wheelbase has been stretched by 30 mm (1.18 inches) to 3090 mm (121.6 inches).

To make the cabin even roomier than before, the body’s width has been extended by 10 mm (0.4 inches) to 1995 mm (78.5 inches) while the rear overhang is 30 mm (1.18 inches) longer, at 1130 mm (44.4 inches), for more third-row space and greater cargo volume. The increased footprint comes along with a newly developed platform and a choice between three and four rows of seats. Depending on the market, the Carnival will be available with seven, eight, or 11 seats.

The interior has practically nothing in common with the previous generation as Kia has gone to great lengths to develop a far more sophisticated cabin. Obvious changes include the adoption of a 12.3-inch digital instrument cluster and a touchscreen of the same size, along with reworked climate controls and the adoption of upscale materials throughout the interior.

Then there are the changes underneath the skin, with Kia saying the fully independent suspension has lowered the noise, vibration, and harshness while increasing comfort. Further lowering NVH levels of the minivan is the greater adoption of sound-deadening material, a full underbody cover, and additional insulation between the engine bay and cabin.

Since we mentioned engines, underneath the hood you’ll find a direct-injection 3.5-liter V6 GDI serving as the range-topping powertrain with 290 hp and 355 Nm (262 lb-ft). A multiport-injection engine (MPI) with the same displacement packs 268 hp and 332 Nm (245 lb-ft). There’s also a newly developed 2.2-liter four-cylinder diesel producing a healthy 200 hp and 440 Nm (325 lb-ft). All three are hooked up as standard to an eight-speed automatic transmission.

Another significant change over the previous-gen Carnival / Sedona is the new column-mounted motor-driven power steering serving as a replacement of the old hydraulic power steering system. Not only is the steering response more direct now, but the steering ratio is 5.6 percent quicker than before and allows Kia to integrate new driver assistance systems. It has everything from lane-keeping assist and blind-spot to forward collision-avoidance assist with car, cyclist, and pedestrian detection.

A semi-autonomous Level 2 driving system is also on board, along with Safe Exit Assist that prevents the power-sliding rear doors from opening if it detects a car is approaching from behind. In a worst-case scenario, following a crash, automatic braking is activated to diminish the severity of a possible second impact.

Kia will have the Carnival on sale in South Korea starting with the third quarter of the year, with additional markets to follow.
Source: Kia