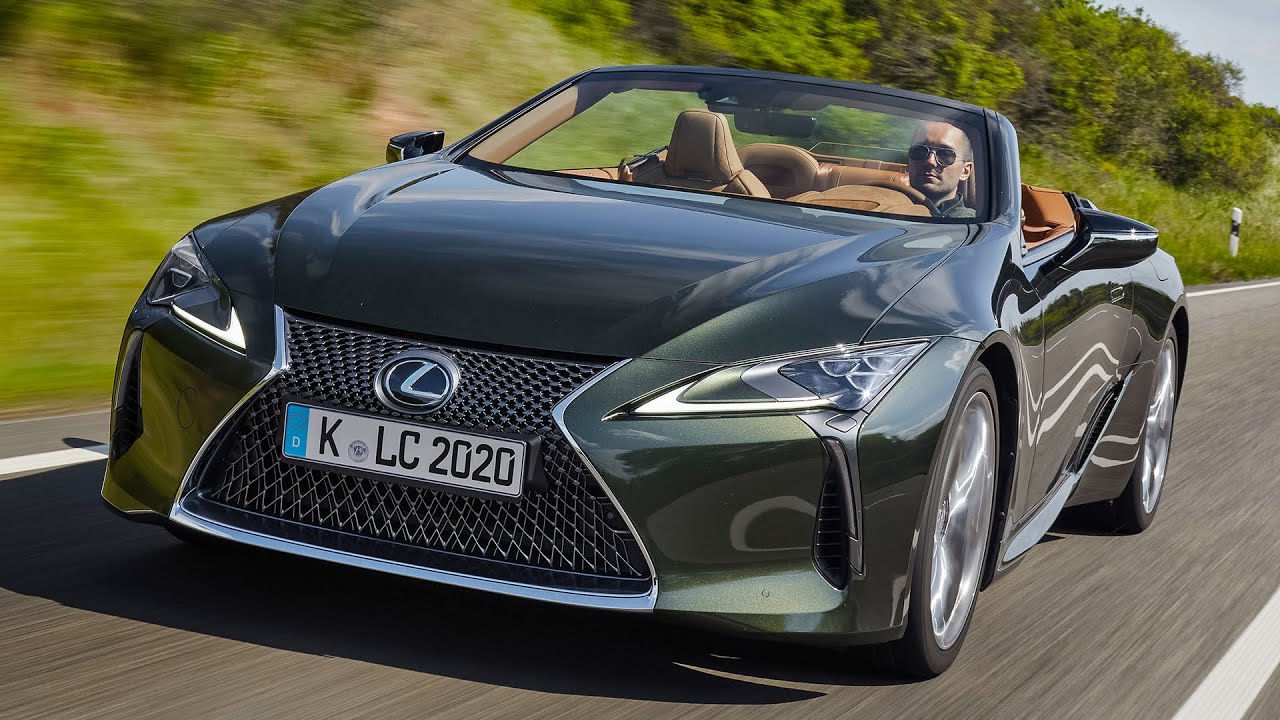 Convertibles, like coupes, are a dying breed. While they won’t become extinct any time soon, it’ll become increasingly rare to see automakers releasing new models. Which is why the 2021 Lexus LC 500 Convertible is such a treat. The stunning V8-powered thrill ride looks just as good, if not better than its already very well received coupe sibling. Although it is mechanically identical to the coupe, the LC 500 Convertible does sport several unique attributes of own, mainly due to its drop-top.

Along with a high level of luxury, proven brand reliability, and stunning design inside and out, the V8 convertible will also carry an expensive price tag. But no matter, Lexus would not have made the decision to build this convertible if it didn’t feel there was a market for it. And with 471 horsepower on tap, what better way to hear the roar of that V8 than from a roofless cabin.

Aside from the roof, the LC 500 Convertible looks nearly identical to the LC 500 Coupe. The four-layer soft-top is where things get interesting. It features an innovative folding mechanism that includes a tonneau cover for when it’s stored. Doing so allowed engineers to focus on the car’s sleek lines without major intrusions to the trunk and cabin that normally come when there’s a heavier hardtop. Deciding against a retractable folding hardtop also saves weight. Notice the rear end features what Lexus describes as a “kicked up” design due to the fact it slightly lifts its profile. Meanwhile, the surface spoiler is broadened to emphasize the car’s low and wide stance. Also, the center brake light has been newly integrated into the trunk lid, whereas on the coupe it’s located on the top of the rear windshield.

The soft top, offered in black and beige, is composed of a material that ensures optimal tension and minimized wrinkling and, of course, excellent sound isolation. It can be lowered at speeds up to 31 mph and only takes about 15 seconds to open and 16 seconds to close.
The cabin design and layout is nearly identical to that of the coupe’s, however, engineers did make a few adjustments, such as reducing wind noise with a uniquely shaped beltline and rear molding to stop wind from entering. The rest of the interior is adorned with premium build materials, such as fine leather upholstery and trim. There’s also a 10.3-inch split-screen multimedia display and a voice-activated navigation system. Connectivity features such as Apple CarPlay and now, finally, Android Auto are standard.The LC 500 Convertible’s HVAC system has also been designed to adjust the temperature automatically whether or not the roof is raised or lowered. If the top is down, there are neck heaters to help keep passengers warm. In fact, the Lexus Climate Concierge with Upper Body Heating automatically manages the a/c, seat heaters, neck heaters, and steering-wheel heater.

Under that long hood lies the naturally aspirated 5.0-liter V8 with 471 horsepower at 7,100 rpm and 398 lb-ft of torque at 4,800 rpm. Power is directed to the rear wheels only through a 10-speed automatic transmission. Unlike the LC 500 Coupe, there is no hybrid option for the convertible. Lexus has yet to provide performance specs, but the convertible does offer a specially tuned suspension, improved chassis rigidity, and a reduction of unsprung weight in the front suspension that improves overall stroke.

Weight was further reduced at the rear thanks to a new lightweight die-cast aluminum suspension brace. Lexus also added a performance damper to improve overall ride comfort. Thanks to its low center of gravity and optimal weight distribution, this front-engined, RWD V8 convertible not only sounds fantastic but is ideally suited for long road trips.

Lexus has not released official pricing. Pricing will almost certainly be higher than the coupe’s base price of $92,300. Unless you’re prepared to spend around $100,000. Speaking of which, while the Lexus LC 500 Convertible has few competitors they are all outstanding and similarly priced, including the BMW 8 Series Convertible, Mercedes-Benz S-Class Convertible, and Mercedes-Benz SL-Class.