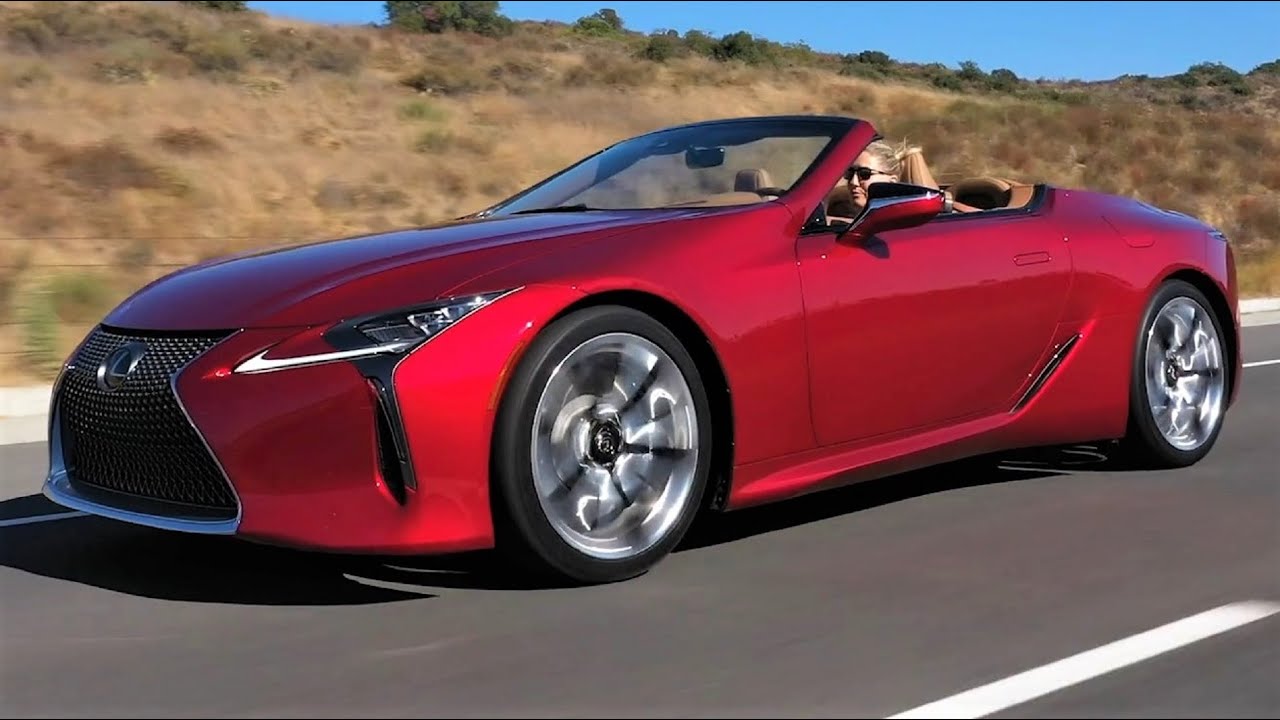 There’s no question that the purr (and eventual roar) of the naturally aspirated 5.0-liter V8 elicits an intoxicating note that beckons the driver to depress the throttle and bring the engine to life. The front-engine, rear-wheel-drive LC Convertible shares the same direct-injected V8 powerplant as the LC Coupe. The engine is rated to produce 471 horsepower at 7,100 rpm and 398 lb-ft of torque at 4,800 rpm. For the LC Convertible, the engine is paired with a Direct-Shift 10-speed automatic transmission. The Convertible posts an impressive 0-60 mph time of 4.6 seconds, and its maximum track speed is electronically limited to 168 mph.

Although great effort is put into keeping certain sounds out of the new LC 500 Convertible, the powerful roar of the naturally-aspirated V8 engine is not one of them. Engine intake pulses are naturally carried through a diaphragm into a sound pipe that carries the sounds of the V8, not the air itself, into the cabin to enhance its rumble (similar to the system employed in the Lexus LFA). To further enhance the aggressive tone of the engine’s exhaust and augment performance, a computer-controlled valve balances the fine line between optimizing exhaust back-pressure and exhaust tone and volume at higher engine speeds.

The LC 500 Convertible may be based in part on the LC 500 coupe, but it is no mere crop-topped replica. Considerable driving evaluation and analysis went into crafting unique driving qualities that give the vehicle its own athletic identity to offer impressive performance that remains true to its convertible design.

Enhancing structural rigidity was high on the list of objectives. Engineers went to work crafting an all-new torsion box at the rear, which, when paired with a new suspension tower brace and V-brace, help provide enhanced rigidity, handling stability and linear responsiveness. Chassis rigidity is further enhanced with the relocation of various structural braces, which includes additional gusseting at the bottom of both the A and B pillars. Laser Screw Welding and the use of high-tensile-strength steel through the structure also aids in chassis reinforcement.

Careful attention was given to the LC Convertible’s suspension, which is tuned specifically to complement the subtle changes in weight between the coupe and convertible. From its dampers and coils, to its bushings and the unique Yamaha Performance damper placed transversely at the rear, the Convertible’s specially-designed components are designed to help ensure comfortable, yet sharp, road-going performance. A reduction of un-sprung weight in the front suspension improves the overall stroke, and weight is also reduced in the rear with the use of lightweight die-cast aluminum for the construction of the suspension tower brace.

The tuning of the Adaptive Variable Suspension (AVS) is optimized to complement the convertible as well. The AVS system continually adjusts damping control in response to driving operation and road surface conditions, with the ability to adjust to an impressive 650 different levels of damping force. The AVS system has also been relocated compared to the previous model year coupe, as it no longer resides at the top of the absorber and is now mounted to the lower side of the shock absorber body below the spring.

The LC 500 Convertible comes standard with 20-inch cast alloy wheels and 20-inch forged wheels are also available. The option to upgrade to large-diameter 21-inch forged wheels is available as well. Run-flat tires are employed at all four corners to eliminate the need for a spare tire, which, in turn, allows engineers to shorten the rear overhang and save additional weight by foregoing a spare.

The LC Convertible’s soft-top design allowed engineers to focus on accentuating the sleek lines of the convertible without significant intrusions to the trunk and cabin space that can come with a heavier, bulkier hard top. It features an innovative folding mechanism that includes a tonneau cover for when it is stored. The coupe’s curves are accentuated with the silhouette of the convertible in a way that only Japanese design can imbue. Even the smooth roof movement is inspired by the three-step movement of Japanese calligraphy: ink brush to paper; movement to the right; the stopping of the ink brush.

The roof can be opened or closed at speeds up to 31 mph. An animated display on the instrumentation panel shows the top’s progress, and it also provide warning messages to confirm the status of the soft top roof. One of the most impressive aspects is the time it takes: approximately 15 seconds to open and approximately 16 seconds to close, depending upon environmental factors.