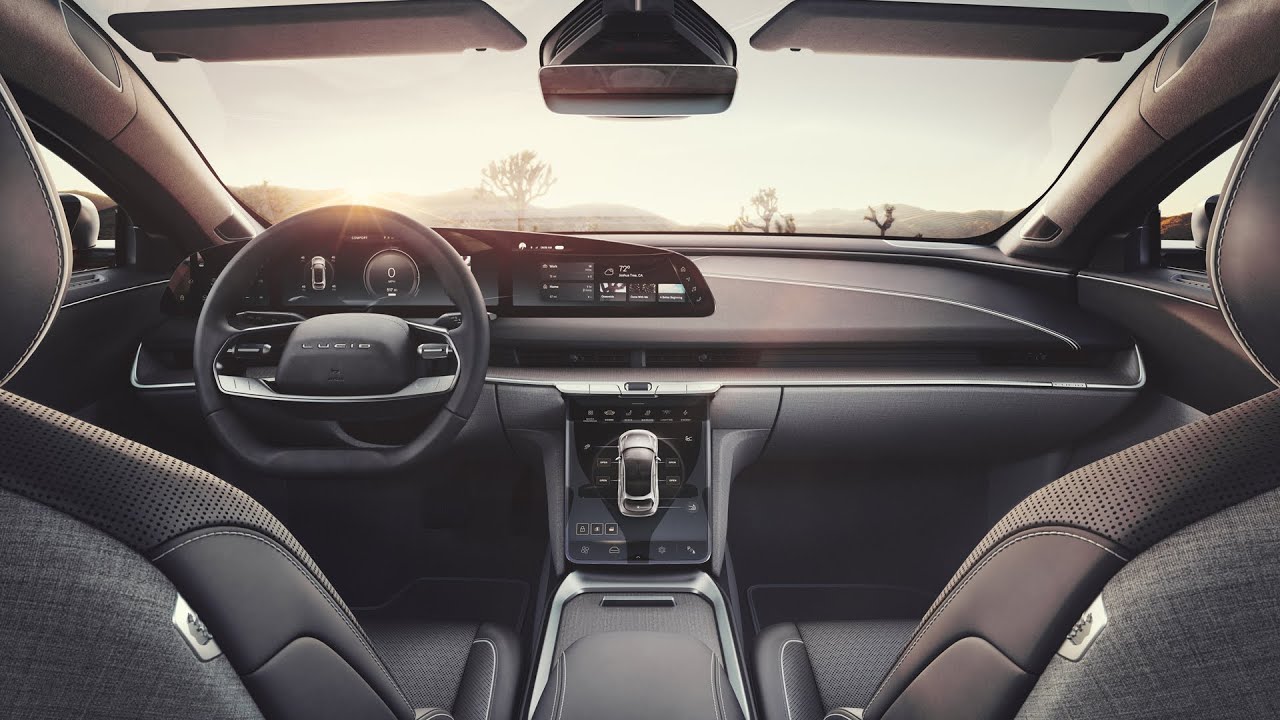 2021 Lucid Air INTERIOR – Luxury Electric Sedan. Unveiling a production vehicle with an on-sale date is a huge deal for any automaker. For an automotive startup, it’s the opportunity to show the world that it’s not working on vaporware but an actual vehicle. But it also gives the general public the opportunity to embrace or reject the company’s first offering right away, which could mean success or failure for the company as a whole. We’ve seen the general design of the Lucid Air for a few years, but now the final production version is here.

The first vehicle will be the launch-edition 2021 Lucid Air Dream. With a starting price of $169,000, it’s more than double the price of the least expensive Air that starts at under $80,000. Lucid CEO Peter Rawlinson told Car and Driver that the limited-edition Dream is the vehicle he wants. “It’s kind of my choice. It’s Peter’s choices. It’s Peter’s car. It’s a unique blend of range and performance.”

It won’t have the 517 miles of EPA-estimated range that made headlines in August. Instead, Lucid says with the 21-inch aero wheels, it’ll hit 465 miles, and with 19-inch wheels, it’ll be able to stay on the road for 503 miles between charges. These numbers are all released prior to results of official EPA range tests. But even if they fall short, they would still make the Air Dream Edition the range king of production vehicles.
Lucid says that thanks to the Air’s ultra-high 900-volt-plus electrical architecture, custom lithium-ion battery cells, and thermal management system, the vehicle’s battery can add 300 miles of range in just 20 minutes when connected to a DC fast-charging station. Owners also get three years of free charging via the Electrify America network and are only charged idle fees after the vehicle has been topped off.

In addition to the 113.0-kWh battery pack that will reach as high as that 517-mile range, Lucid says its modular pack can be adjusted to remove four individual modules for lower-priced variations of the sedan. For those wanting speed and range, though, the pricey launch edition is the way to go.

The dual-motor Dream will be the most powerful Air. The automaker says the vehicle will have 1080 horsepower and can cover a quarter-mile in 9.9 seconds. The automaker also says it can do zero to 60 mph in 2.5 seconds. That puts in the same EV league as the Tesla Model S Performance with Raven upgrade and Porsche Taycan Turbo S.

At least it will be for the next year, according to Rawlinson. A tri-motor performance variant will be available in late fall/early winter of 2021. With each motor capable of up to 650 horsepower, Lucid says, the performance Air will be one to keep an eye on.

The exterior of the vehicle is a refined version of what Lucid has been showing off for years at auto shows and via its beta fleet of pre-production test cars. In real life, it’s shorter than you expect. This is the result of what the company calls the Lucid Space Concept, combining its motor, transmission, and inverter into a single 163-pound unit. The idea is to save space under the cockpit to make the interior larger.
Sitting in the vehicle, there’s plenty of legroom for large adults in the front and back seats. Those taller than 6’3″ who sit in the back seats might start to hit the limits of available headroom. The reclining rear seats Lucid showed off in back in 2016, are still a year away from making it into production vehicles.

Up front, the automaker’s 34.0-inch digital dash cluster extends to the left for additional lighting controls and right as part of the two-screen infotainment system. Up top, media, phone calls, navigation and other items are controlled, but those controls can be swiped down to the larger screen to expose more options for those items. The rest of the time, the lower display houses the energy and vehicle controls, including climate controls. The lower display also retracts into the dash, opening up additional storage in the vehicle. Lucid did make sure to add a physical fan plus temperature and volume controls. So it’s not completely digital inside the car.