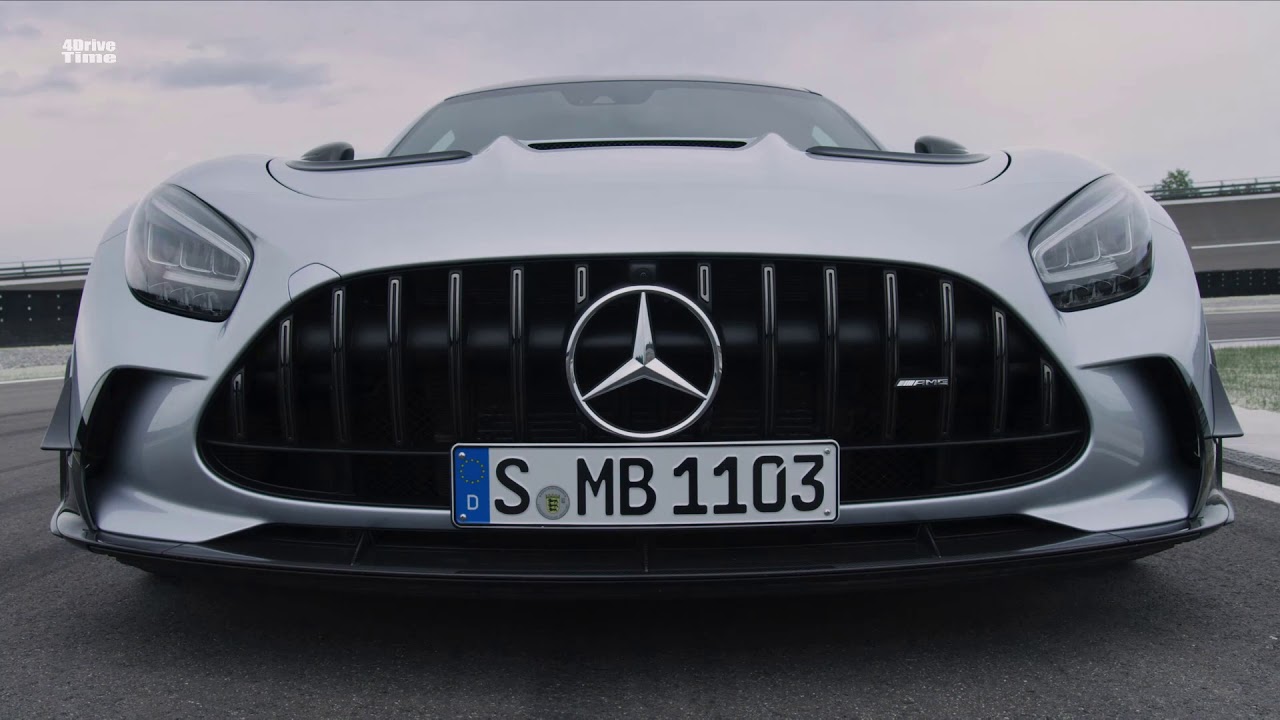 2021 Mercedes AMG GT Black Series – Extreme, 720 hp monster. Each one of the five AMG Black Series models so far has been an exercise in extreme performance, expensive technology, and extravagant style. And the new AMG GT Black Series tops each one of them: Directly inspired by the AMG GT3 race cars, it is fitted with a 720-hp V-8 engine and a plethora of changes that set it apart sharply from any other AMG GT, including the wild GT R.

Even at first glance, the AMG GT Black Series is a very different animal: The Panamericana-inspired front grille is far larger, angrier, and feeds larger intercoolers compared to the lesser GT models. Carbon fiber is used liberally, including for the hood, roof, hatch, as well as the front and rear facias. The front hood is perforated with large air outlets. An extensive aero package includes a manually adjustable front splitter and rear wing. The wing also features an active aero flap is electronically adjusted by 20 degrees, flattening for greater speeds and inclined to improve braking and control stability. The aggressive bodywork highlights the ultra-wide track and is accentuated with black wheels shod with 285/35ZR-19 front and 335/30ZR-20 rear rubber, which are available in two compounds of the Mercedes-spec Michelin Pilot Cup 2 R tires; the M01A being a softer tire and the M02 being slightly harder. The ostentatious visual package is topped off by AMG “Magmabeam” paint.

The show continues inside, with aggressive bucket seats that provide high lateral support, a microfiber steering wheel, and microfiber door and instrument panels. The grippy material underscores the racing aspirations of the AMG GT Black Series.

The body has been stiffened with carbon-fiber panels up front and abaft, designed to increase stiffness and precise handling. The front axle uses a carbon-fiber anti-roll bar with two adjustment settings. An iron anti-roll bar is used in the rear and has three adjustment settings. The camber is manually adjustable both on the front and rear axle, a true Black Series element that has been present on this family of cars since its inception with a derivative of the SLK. The carbon-ceramic rotors and Black Series specific brake pads that are taken directly from motorsports applications further enhance this car’s track capabilities.

None less would do to bring the awesome power to the road: The M178 engine, a twin-turbocharged 4.0-liter V-8, has been modified so extensively that it receives its own identifier, now called the M178 LS2. A major change is the move away from a cross-plane crankshaft. Like Ferraris and Ford Mustang Shelby GT350s, the LS2 uses a lighter, flat-plane crankshaft that spins more freely to allow for even more aggressive throttle response. The revised engine’s 7200 rpm redline indicates it doesn’t spin much quicker, just 200 rpm more than the GT R. It will be interesting to compare the sound of this engine with lesser versions of the M178 V-8; in the Black Series, the LS2 it features a different firing order to maximize the energy delivered to the turbos by the exhaust pulses. The turbos now house a larger compressor wheel and can deliver up to 24.6 psi of boost, up from the maximum 19.6 psi the GT R can supply. Like the GT R, the Black Series gets the trick 9-mode traction control system that is controlled by a knob centrally located on the dash.

Maximum power is a full 720 horsepower, available from 6700 to 6900 rpm; maximum torque is rated at 590 lb-ft and available on a plateau that stretches from 2000 to 6000 rpm. The power is transmitted to the rear wheels through a seven-speed dual-clutch automatic transmission. The result of all this awesomeness is a Mercedes-AMG claimed zero-to-60 mph time of just 3.1 seconds. Considering we’ve done the same with far less powerful GT’s, we’ll believe it. The top speed is a full 202 mph, a figure that, according to AMG, “is only sensible on cordoned-off racetracks.”