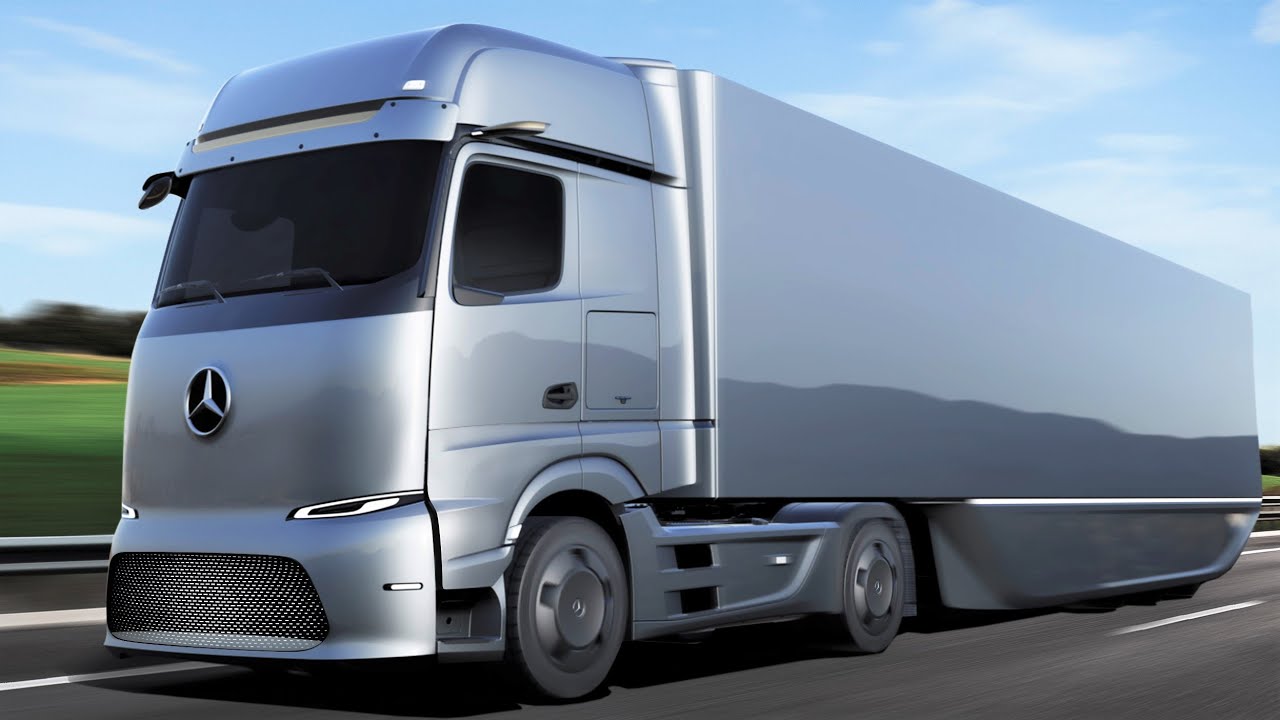 The development engineers at Daimler Trucks have based the GenH2 Truck on the capabilities of the conventional Mercedes-Benz Actros long-haul truck with regard to tractive power, range, and performance. For example, the series-production version of the GenH2 Truck is to have a gross vehicle weight of 40 tons and a payload of 25 tons. Two special liquid-hydrogen tanks and a particularly powerful fuel-cell system will make this high payload and long range possible, and therefore form the core of the GenH2 Truck concept.

Daimler Trucks prefers to use liquid hydrogen (LH2), because in this state, the energy carrier has a far higher energy density in relation to volume than gaseous hydrogen. As a result, the tanks of a fuel-cell truck using liquid hydrogen are much smaller and, due to the lower pressure, significantly lighter. This gives the trucks a larger cargo space and higher payload weight. At the same time, more hydrogen can be carried, which significantly increases the trucks’ range. This makes the series GenH2 Truck, like conventional diesel trucks, suitable for multi-day, difficult to plan long-haul transport and where the daily energy throughput is high.

Daimler Trucks is currently pressing ahead with the development of the necessary tank-system technologies to make liquid hydrogen usable also in mobile applications as an energy source for series-produced fuel-cell trucks. The storage of cryogenic liquid hydrogen at -253 degrees Celsius is already common practice in stationary applications, for example in industry or at hydrogen filling stations. This also applies to the transport of liquid hydrogen as cargo.

The two stainless-steel liquid-hydrogen tanks intended for the series version of the GenH2 Truck will have a particularly high storage capacity of 80 kilograms (40 kg each) for covering long distances. The stainless-steel tank system consists of two tubes, one within the other, that are connected to each other and vacuum-insulated. In the series version of the GenH2 Truck, the fuel-cell system is to supply 2 x150 kilowatts and the battery is to provide an additional 400 kW temporarily. At 70 kWh, the storage capacity of the battery is relatively low, as it is not intended to meet energy needs, but mainly to be switched on to provide situational power support for the fuel cell, for example during peak loads while accelerating or while driving uphill fully loaded. At the same time, the relatively light battery allows a higher payload. It is to be recharged in series-production vehicles with braking energy and excess fuel-cell energy. A core element of the sophisticated operating strategy of the fuel-cell and battery system is a cooling and heating system that keeps all components at the ideal operating temperature, thus ensuring maximum durability. In a pre-series version, the two electric motors are designed for a total of 2 x 230 kW continuous power and 2 x 330 kW maximum power. Torque is 2 x 1577 Nm and 2 x 2071 Nm respectively.

The Mercedes-Benz eActros LongHaul battery-powered long-haul truck will be in the same vehicle class as the GenH2 truck. Its features will be largely identical to those of the series-produced GenH2 Truck or a conventional diesel truck. The comparatively short range of the eActros LongHaul on one battery charge is offset by its high energy efficiency, as battery electric drive has the highest efficiency among alternative drive systems. This offers transport companies significant advantages in the application scenarios envisaged for the eActros LongHaul due to its low energy costs. Many of the long-haul applications in the practical operations of transport companies do not require a range greater than the approximately 500 kilometers that the eActros LongHaul will be able to cover on one charge. In addition, legal requirements regarding truck drivers’ driving times limit the need for longer ranges, depending on the case. In the EU, for example, truck drivers have to take a break of at least 45 minutes at the latest after 4.5 hours of driving. During this time, thanks to the latest charging technology, the battery can be charged with a large proportion of the energy needed for the ongoing journey. The eActros LongHaul will therefore be the right choice for transport companies for regular use on plannable routes and with the appropriate distances and charging possibilities.

With its market launch in the middle of the decade, the eActros LongHaul will be available some time before the GenH2 Truck. The required infrastructure can also be set up sooner – and at comparatively low cost – by the transport companies themselves for charging at their depots. This so-called depot charging is the most important step for the use of the eActros LongHaul, and means that the first areas of application can already be covered.