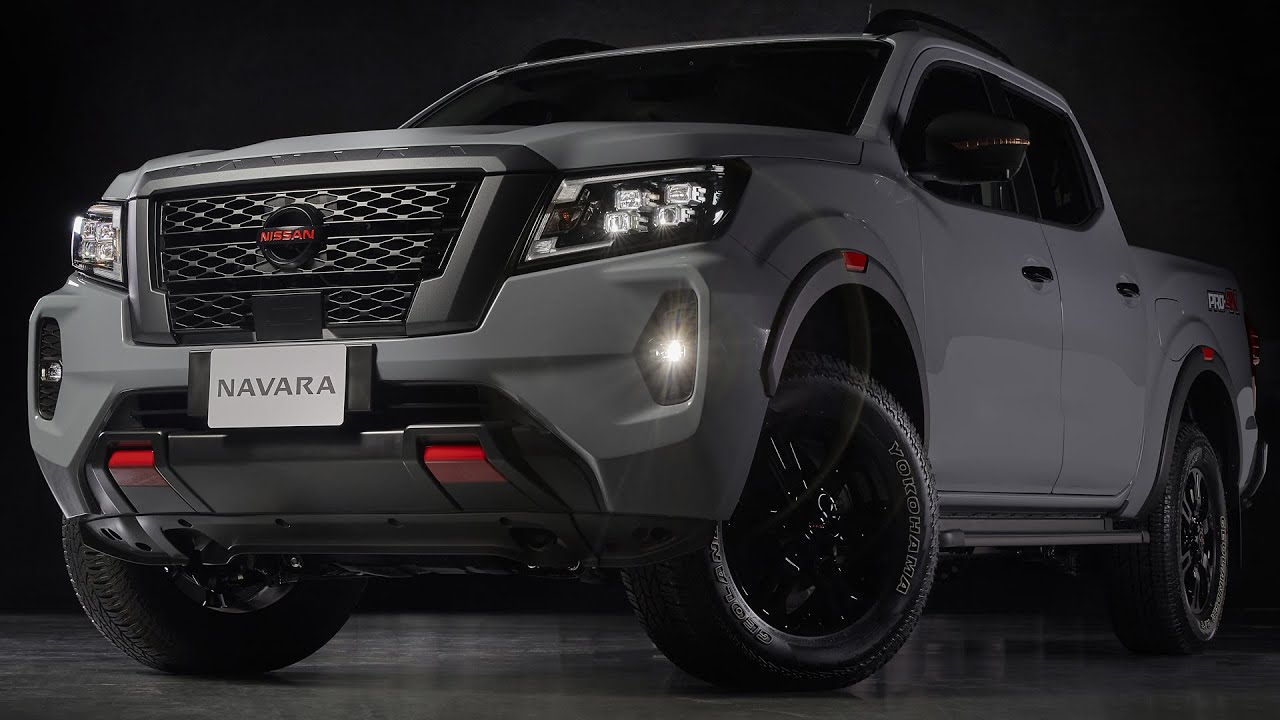 2021 Nissan Navara reveal – Titan style looks and new rugged Pro 4X variant. Nissan has pulled the covers off the facelifted third-generation Navara after a number of teasers and leaked images have surfaced in recent weeks. The pick-up truck receives several aesthetic, technological and safety upgrades to fend off fierce competition from renewed rivals.

This is only the first major overhaul in six years since the current D23 was introduced in 2014. To go with the redesign, Nissan has formally dropped the NP300 middle name in official communications, mirroring a change already seen in certain markets.

The revised exterior has been heavily inspired by the latest fullsize Titan, featuring that truck’s massive “interlock” grille. This consists of three bars of mesh partially surrounded by a chrome frame, with the Navara name picked out in block letters at the top. Complementing the bolder look are the new cube-like, quad-projector LED headlights and C-shaped daytime running lights.

Also revised is the front bumper with a cross-shaped design, incoporating fake vertical corner air intakes and a large skid plate with prominent tow hook covers. The bonnet has been made taller and comes with a centre bulge, matching the rear bed which is also taller with the facelift. New side step finishers are claimed to improve aerodynamic performance, reducing wind noise and fuel consumption.

Moving to the rear of the new Navara, you’ll find LED tail lights that also feature the headlights’ C-shaped graphic, as well as a revamped tailgate design with the Navara script. The beefier rear bumper come with built-in steps to make reaching into the bed easier. Depending on the region, the truck also gets a larger bed with integrated tie-down hooks.

Nissan is also introducing a new Pro-4X grade that gets a whole host of aesthetic upgrades, including wheel arch extensions and blacked-out badging, grille, door handles, wing mirrors, roof rails and side steps. The wheels are smaller than other range-topping models, measuring 17 inches in diameter, but they’re finished in black and come with all-terrain tyres.

You’ll also find orange-red accents on the Nissan badge, tow hook covers and the aforementioned wheel arch trims, plus a new metallic grey paint option. What you won’t find, however, are the kinds of off-road-biased chassis upgrades as seen on the Frontier Pro-4X (which is actually the old D40 Navara) in North America.

Inside, the Navara remains largely identical to before, save for a few technological improvements. The multi-info display in the instrument cluster is now a larger seven-inch screen with a higher resolution, while the infotainment system is a new Nissan Connect unit with an eight-inch touchscreen and Apple CarPlay functionality. The number of USB ports have also increased and includes a new USB-C port at the front.

Comfort has also been improved all around thanks to increased sound insulation and acoustic glass used in the windscreen and front side windows. Rear passengers benefit from reshaped seat cushions and backs as well as a new armrest with integrated cupholders. New convenience features include rain-sensing wipers, auto-folding door mirrors and speed-sensing door locks.

The Navara continues to be offered with coil-sprung multilink rear suspension but gets a strengthened live rear axle for improved load-lugging capability. Nissan claims to have increased the truck’s payload capacity but stopped short of releasing any hard numbers. A new steering rack has also been fitted to increase response and low-speed manoeuvrability.

No mention of engines, so the Navara will likely soldier on with the same YS23 2.3 litre single- and twin-turbocharged four-cylinder diesel mill, making 188 hp at 3,750 rpm and 450 Nm of torque from 1,500 to 2,500 rpm in top trim. It is unclear whether ASEAN markets like ours will finally get the newer mill or be stuck with the same 2.5 litre single turbo mill as before. Six-speed manual and seven-speed automatic gearboxes should also continue to be offered, as will rear- and four-wheel-drive options.