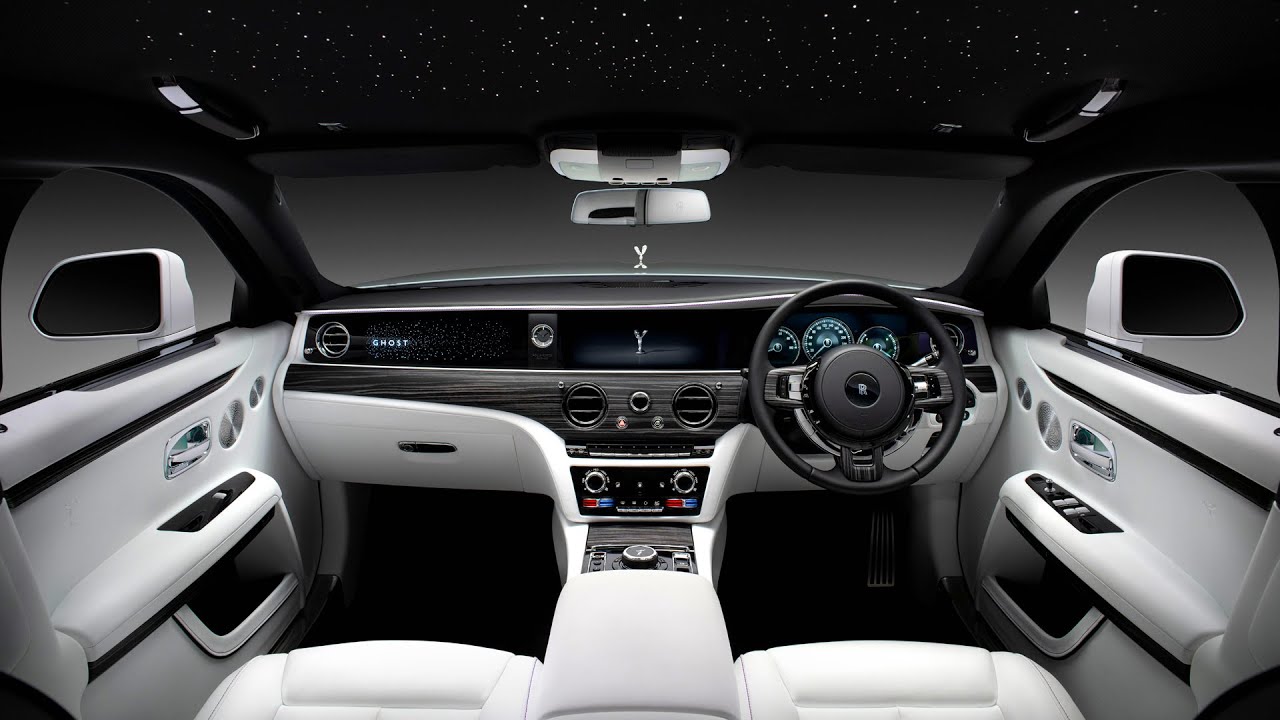 2021 Rolls Royce Ghost – Redefining the luxury car. The 2021 Rolls-Royce Ghost sedan is built on the company’s modular Architecture of Luxury platform, said to be lighter, stronger, and stiffer.

The Ghost now has all-wheel drive and an optical road-reading suspension to adjust to road imperfections, aiming to deliver the unerringly quiet and smooth ride you’d expect from a Rolls-Royce.
Rolls says the understated personality of the new Ghost is “post-opulent” and rejects “superficial expressions of wealth.” The car is expected to be priced at more than $300,000 when it goes on sale next year.

Change occurs slowly at Rolls-Royce, but it does happen—even when it seems not to. The similarities between the new Ghost sedan and its predecessor are immediately obvious, but the English luxury maker promises that almost everything beneath the surface has changed. Only two components are carried over directly between the generations: the Spirit of Ecstasy badge and the umbrellas that are hidden within the rear doors.

The biggest change is one that is effectively invisible. The old Ghost sat on a development of the same platform as the F01 2008 BMW 7-series alongside which it was developed. The new Ghost has followed both Phantom and Cullinan onto Rolls-Royce’s modular Architecture of Luxury platform, which is claimed to be lighter and stronger and to give much more dimensional freedom. The new car’s overall length has grown by 3.5 inches to 218.3 inches, and its width has increased by 1.2 inches to 77.9 inches, although the 129.7-inch wheelbase is identical. Rolls-Royce claims torsional stiffness has increased and that the lower acoustic impedance of aluminum has helped to improve cabin refinement.
Important details haven’t been changed, of course. The new Ghost keeps the rear-hinged “coach” doors at the back that have been featuring heavily in hip-hop music videos since the seventh-generation Phantom launched with them in 2003. These retain the power-closing function of the last Ghost but now add power opening. The new functionality is described in splendidly baroque fashion by the official press release: “Clients first open the door with one pull of the interior handle, then allow the handle to return to its resting position while they check for potential hazards, and then pull and hold it for full power assistance on opening. Once the door is opened sufficiently for the client’s egress, they simply stop pulling the handle, which engages a door brake.” Sounds complicated, doesn’t it?

The other unaltered feature is the continued presence of a V-12; Rolls-Royce hasn’t fallen victim to downsizing yet. The twin-turbo 6.8-liter engine produces the same 563 horsepower and 627 lb-ft of torque it makes in the Cullinan, with the torque peak available from just 1600 rpm. Power reaches the road through an eight-speed automatic gearbox and—a first for a Rolls sedan—an all-wheel-drive system. While lighter than the Cullinan or Phantom, the Ghost is still a substantial automobile, with a 5628-pound curb weight, according to the company. We’re also told it can dispatch the zero-to-60-mph dash in 4.6 seconds and will have a top speed limited to 155 mph.

Those numbers are impressive for something so large, but Rolls-Royce is keener to talk about the Ghost’s refinement, which should get close to the tomblike hush of the Phantom. For soundproofing, the Ghost uses more than 220 pounds of acoustic damping, plus double glazing and felt insulation within a twin-section floor and bulkhead. Panels have also been designed with shapes rather than flat, resonant surfaces to reduce noise transmission. And while most automakers would try to give any 12-cylinder engine a distinctive voice, Rolls’s engineers have worked hard to minimize the engine’s soundtrack with an air intake system “incorporating larger porting to reduce engine presence in the interior.” It even has ports in the rear parcel shelf to disperse resonant sound waves that build up within the 18.0-cubic-foot trunk at cruising speeds.

There is no word on pricing yet, but we can safely predict the new Ghost will not be cheap. We are predicting a starting price in reasonable proximity to the $314,400 of the outgoing model. Given the excellence of the far cheaper Bentley Flying Spur—which is nearly $100,000 less.