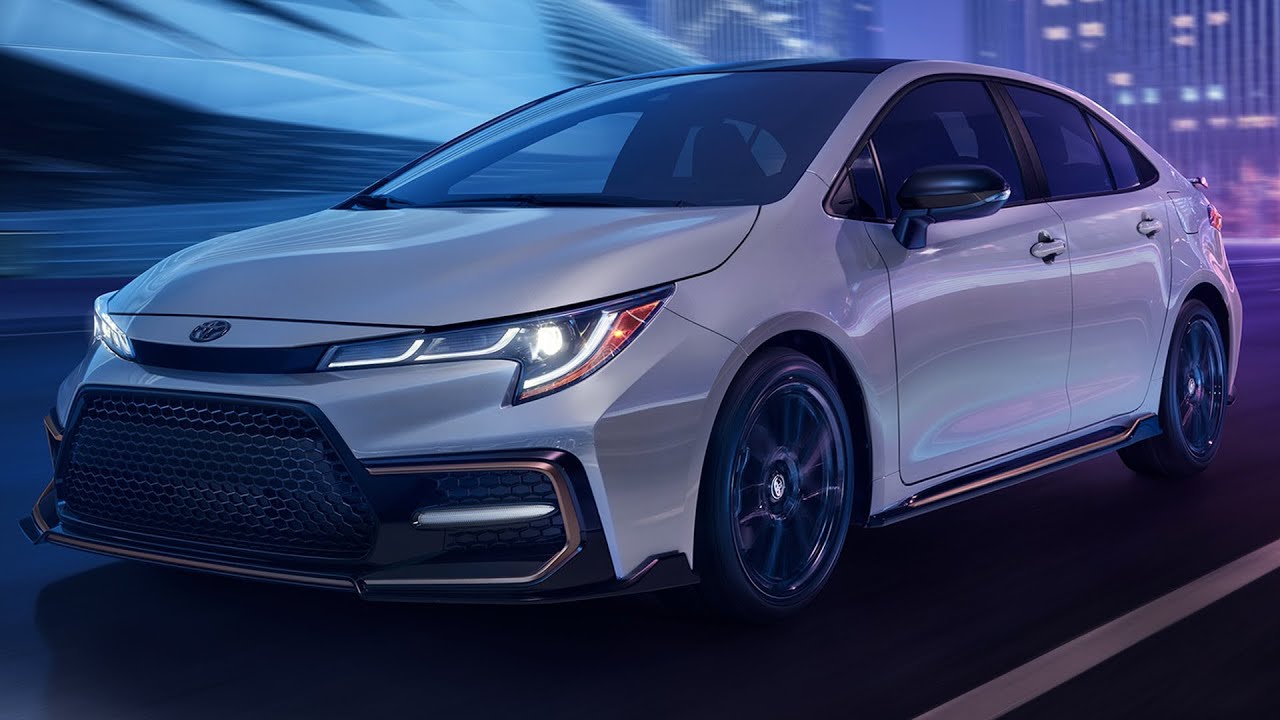 2021 Toyota Corolla Apex Edition – Features, Design and Interior. Toyota is updating three of its core sedans for 2021, including the Camry and Avalon. But the compact Corolla is receiving some love, too, mostly in the form of a new Apex Edition trim.

The first things you’ll probably notice on this car are the black and bronze exterior accents. Available on SE and XSE models, the Apex Edition package has a special body kit that alters the front end, side moldings and other parts. A unique trunk-lid spoiler will be offered as an option. Three exterior color combinations will be offered on this car, including a gray called cement with a black sand pearl roof. Super white, also with a black top, and straight up black sand pearl are on the menu as well. Further enhancing its style, this little four-door rolls on 18-inch wheels that are finished in gloss black. Depending on where you live, they can be wrapped in all-season tires or you can opt for summer rubber if you prefer.

Another functional change is stiffer springs that lower the body by more than half an inch. Paired with unique shock absorbers, these coils should improve the car’s handling and steering feel. This Corolla’s suspension also benefits from solid stabilizer bars and special jounce bumpers. Matching those other changes, Apex Edition models feature unique tuning for the power-steering system, which should provide an even sportier drive.

Giving it an air of exclusivity, production of the 2021 Toyota Corolla Apex Edition is limited to just 6,000 units. The overwhelming majority of those cars will be fitted with a continuously variable transmission, though 120 will be offered with a six-speed stick for greater driver involvement.

Under this sedan’s hood is a 2.0-liter four-cylinder engine with 169 horsepower and 151 pound-feet of torque. Underscoring the Corolla Apex Edition’s sporty nature, this engine exhales through a special cat-back exhaust system. When matched to a continuously variable transmission, it should return 31 miles per gallon city, 41 mpg highway and 34 mpg combined. The available manual gearbox, unfortunately, degrades those figures slightly. Expect 29/36/32, respectively.

By comparison, L, LE and XLE versions of the standard Corolla sedan feature a 1.8-liter engine that only delivers 139 hp. A fuel-sipping hybrid variant with 121 hp is offered, too.

As for the rest of the Corolla lineup, Android Auto is finally being offered. For 2021, it will be standard across the range. Apple CarPlay and Amazon Alexa compatibility have been included at no extra charge since 2020.

Rear side airbags have been added to the Corolla sedan for enhanced safety. Also for 2021, blind-spot monitoring with rear cross-traffic alert will be standard on XLE and XSE trim levels. This will be optional on LE, LE Hybrid and SE variants.

Toyota Safety Sense 2.0 is standard across the Corolla range, which isn’t news for 2021, but it is welcome. This includes automatic high beams, road-sign recognition, lane-departure warning and more.

The bulk of the 2021 Corolla lineup is already on sale, but production of this stylish offering isn’t slated to begin until September. Specific pricing will, of course, be announced closer to its on-sale date.