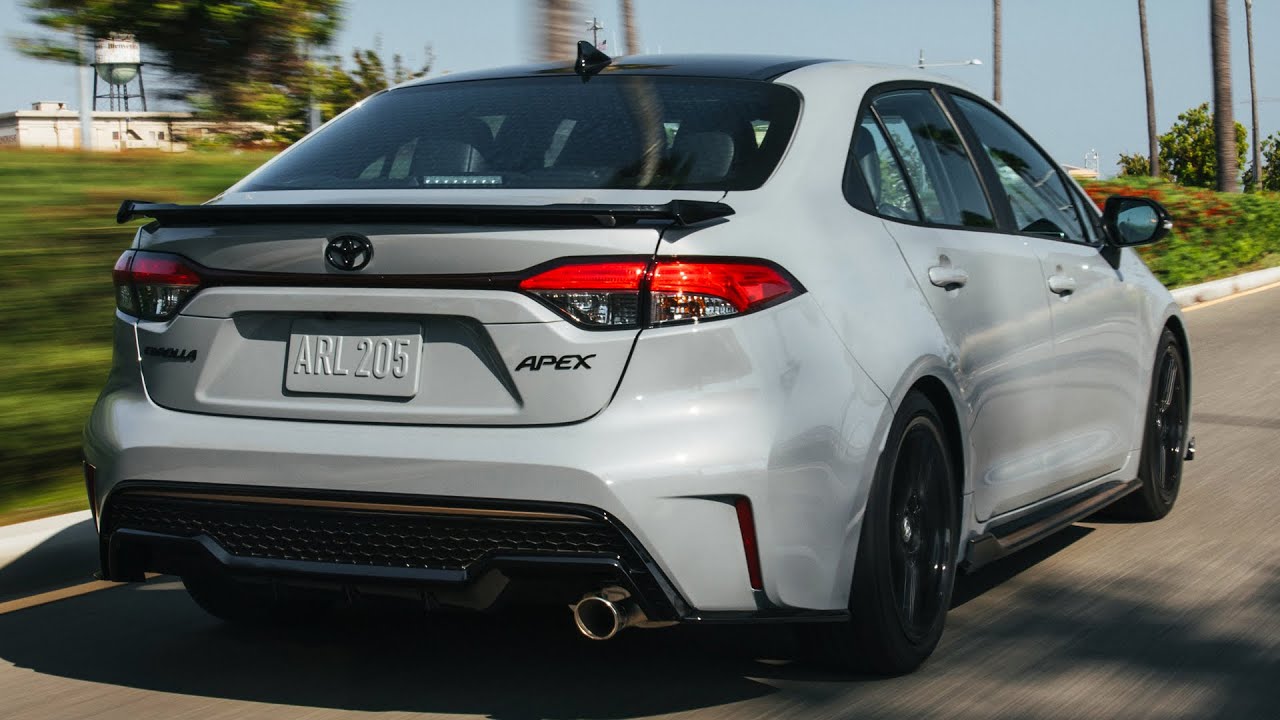 2021 Toyota Corolla Apex – Interior, Exterior and Driving. The Toyota Corolla is so successful that even its limited-run special editions number in the thousands. Toyota is producing a total of 6000 of this new 2021 Corolla Apex model for the United States, which is hardly rare, but still makes up a tiny sliver of the hundreds of thousands Corollas that are annually produced.

Why call it Apex and not TRD like the Camry TRD and Avalon TRD? After all, this Corolla is a similar concept to those TRD sedans as the Apex package doesn’t alter the engine or transmission but adds an aggressive body kit, a silly-looking rear spoiler, upgraded wheels and tires, and a retuned suspension. The reason for the Apex name lies in the history of the Corolla. In the 1980s, the hallowed rear-wheel-drive AE86 model from the 1980s—a drifting icon and main character in the Initial D manga series—featured an Apex package.

Just 120 of the 6000 Apex models will be equipped with six-speed manual transmissions, and unfortunately Toyota didn’t give us one of those to test. With the same 169-hp 2.0-liter inline-four and continuously variable automatic (CVT) found in mainstream Corolla SEs and XSEs, the drivetrain says commuter car, not sports sedan.

The 2.0-liter buzzes when you rev it toward the redline, but at least the CVT doesn’t hang at a single rpm under acceleration. It’s first gear is a real, physical thing. Once rolling, a clutch engages and directs the power to the CVT, which has set ratios to give the impression of a transmission with gears. There are also paddle shifters on the steering wheel to grab those preset ratios. Acceleration, to no one’s surprise, is identical to the last 2020 Corolla XSE sedan we tested. The Apex does have different exhaust tuning; unfortunately you can only really hear the snortier sound when you’re standing outside the car. Behind the wheel, the auditory experience is just about the same as any other Corolla.

The Apex’s chassis upgrades do pay dividends at the test track. Stiffer springs lower the car by 0.6 inches, the anti-roll bars are beefed up, and the dampers are retuned. Grippier summer tires are available as a no-cost option, and the Dunlop Sport Maxx 050 rubber helped the Apex pull 0.89 g’s on our skidpad, beating the Corolla XSE with all-seasons by 0.07 g. The tire upgrade also helped the Apex stop shorter from 70 mph. Its excellent 163-foot stop beats the regular Corolla by 11 feet.

That suspension does exact a penalty. Impacts are harsh, and there’s an unsettling amount of bounce over expansion joints and road imperfections. Body roll has been reduced, but the stiff suspension makes the Apex feel unrefined and juvenile.

The Apex option starts at $2385 with the manual and $2695 with the automatic and is available for SE and XSE models. That strikes us as pricey for a body kit, summer tires, and a harsh suspension. Fortunately, a more legitimate performance Corolla is on its way that should make us forget all about the not-fully-baked Apex model. While the extra grip is nice, the add-ons aren’t in harmony with the sensible nature of the rest of the car. A rumored GR Corolla hot hatch with 257 horsepower would likely be a more interesting special edition than the Apex.