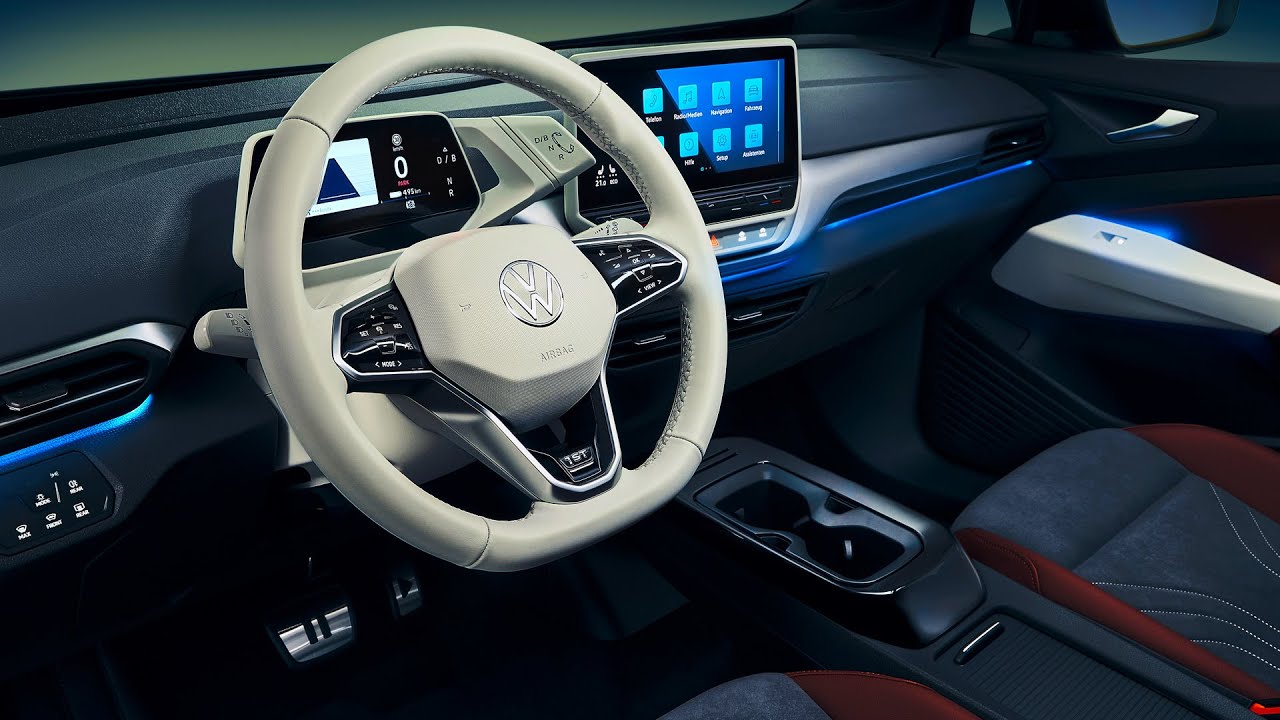 2021 Volkswagen ID.4 – INTERIOR. The VW ID.4 electric SUV has been revealed. It’s a bigger brother to the ID.3 hatchback and VW’s alternative to the upcoming Tesla Model Y.

The new VW ID.4 is about the size of the VW Tiguan but it looks nothing like your average family SUV thanks to its rounded, curvy design. The headlights look pretty similar to the ones on the new VW ID3 with a pinched design and central bar that goes through the VW badge. Thankfully, there’s no fake grille like the one you get on the BMW iX3.

You get some big chrome strips above the windows on each side, and there’s a large contrasting black panel on the doors that looks similar to what you get on a Renault Kadjar. Large 20-inch alloy wheels come as standard, but you can swap them out for some massive 21-inch rims if you want. At the back, there’s a full-width brake light and more black plastic trim, but no fake exhausts – it is an electric car after all.

The new VW ID.4’s cabin is so minimalist that you don’t even get a gear lever. Instead, you twist a knob up by the driver’s display instead –a bit like on the BMW i3.

There are some brushed metal bits on the dash and a bit of glossy plastic on the centre console, and you can bet it’s going to feel really well screwed together. If you’re feeling brave you can get a two-tone brown and white interior.

The seats should be pretty comfy, too. High-spec cars get pneumatic lumbar adjustment as standard and they’ve been approved by the ‘German Campaign for Healthier Backs’.
New 2021 VW ID.4 batteries and range

The VW ID.4 comes with the same 77kWh battery capacity as range-topping versions of the smaller VW ID.3. It’ll do 320 miles between charges, which is 20 miles less than the ID.3 can manage – partly because the ID.4 is bigger and heavier.

The fastest way to charge the ID.4 is by using a 125kw public charging point. This can boost your range by about 200 miles in just half an hour. You can also charge it using slower public chargers or with an 11kW wallbox at home. Although, you’ll have to leave it plugged in overnight to fully charge it that way.

The VW ID.4 comes with one electric motor that produces 204hp and 310Nm of torque. This means it can do 0-60 in 8.5 seconds. That’s more than a second slower than a 190hp diesel Tiguan, but, the ID.4 can deliver all its torque instantly so it should feel pretty nippy in town.

VW has slapped a 100mph top-speed limiter on the ID.4. Now, that doesn’t really matter in the UK, but it’ll probably annoy a few Germans who use the Autobahn to get to work. VW will make a faster model with two motors and four-wheel drive, but you’ll have to wait until 2021 for that. It’ll likely the same motors as the four-wheel-drive Skoda Enyaq vRS, so it’ll make about 306hp and should do 0-60 in around 6.2 seconds.

The VW ID.4 gets VW’s latest infotainment system with two screens as standard – a small one in front of the steering wheel instead of regular dials and a bigger touchscreen on the dashboard. This measures either 10 or 12 inches, depending on which model you pick.

These screens work just like the ones in the new VW Golf, so they control pretty much all of the car’s features. You don’t have to rely on the touchscreens, though, because the ID.4 also gets VW’s latest voice command system. You can tell it to change the temperature in the car. Or play a different song on the stereo. And you can use it to enter an address in the sat-nav.
2021 VW ID.4 practicality

The VW ID.4 is a smidge longer than a Tiguan, but its boot is slightly smaller. It can hold 543 litres, which is 72 litres less than the Tiguan can carry. The ID.4 has a bigger wheelbase than the Tiguan, which means there’s more space between the front and back wheels for people to sit inside. The batteries are mounted under the floor, so they don’t get in the way, and the ID.4’s tall roofline means there should be plenty of headroom inside.
2021 VW ID.4 price and release date

The VW ID.4 will go on sale in late 2020. At first, you’ll only be able to high-spec 1st Edition and 1st Edition Max cars. These come with lots of optional extras as standard, such as fancy LED headlights and extra safety kit, so they’ll be quite expensive.

A 1st Edition model will set you back around £45,000 and the Max version will hit you with a £55,000 bill. Thankfully, VW will release some cheaper models with a bit less kit, but you won’t be able to get your hands on these until 2021.