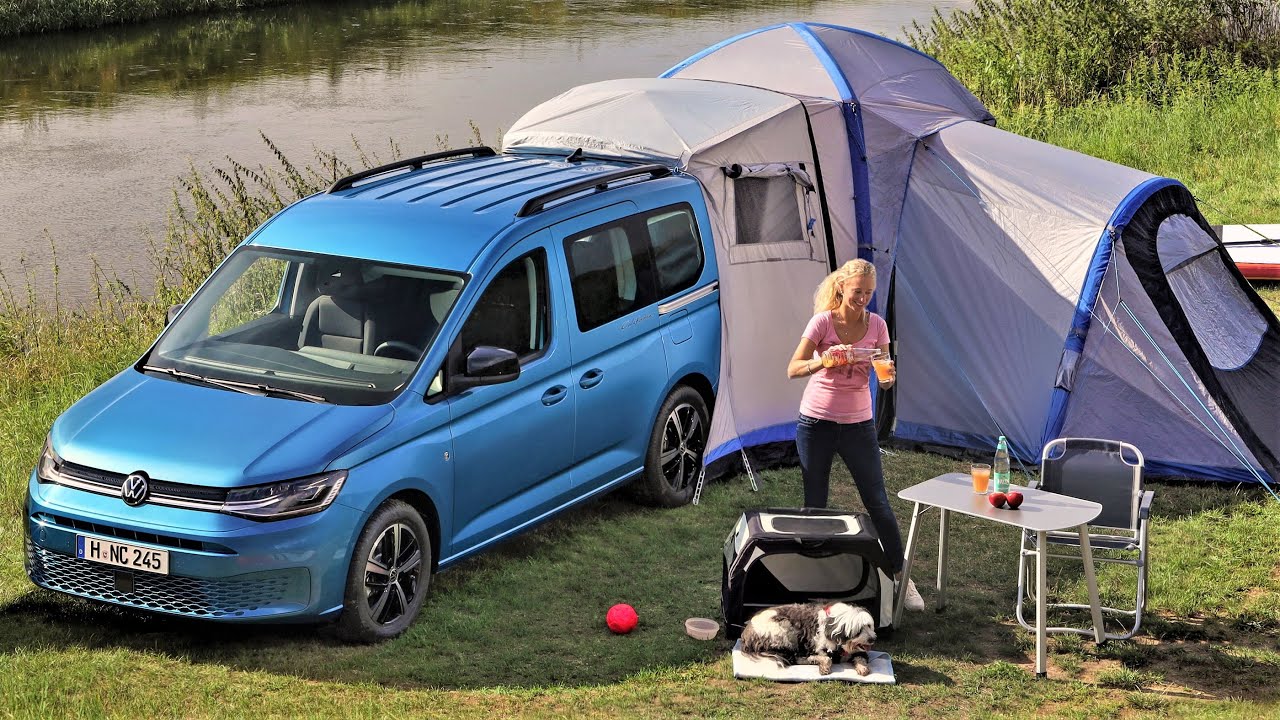 The Caddy California is based on the new fifth generation Caddy. It is thus the first camper van to utilise the design benefits of the modular transverse matrix (MQB): latest technologies and an increase in space. The Caddy California, with a length of 4,501 mm, will launch before the end of the year. A version with a longer wheelbase will follow in 2021 (length: 4,853 mm). The back impresses with camper van fittings cleverly thought-out down to the last detail. These include a new fold-out bed. With cup springs and a high-quality mattress, its construction provides the same high level of sleeping comfort as the beds in the T6.1 California and Grand California. Measuring 1,980 x 1,070 mm, the bed is very big. Folded up it reduces to a third of its length and sits compactly above the boot space. While on the previous model the second seating row was part of the bed construction, this is now no longer the case. Before the journey the seats of the second row can therefore be very easily taken out. In this area too the Caddy California thus provides appreciably more storage space.

The Caddy California’s optional mini kitchen is a new feature, highlight and USP in this camper van class. Hinged to the left cargo space wall beneath the bed, when the hatch open is it can be pulled out to the rear. The hatch thus also provides protection from the rain while cooking. The fact that the kitchen is utilised from behind the vehicle also gives optimum access at full standing height. The new mini kitchen consists of two pull-out parts. Integrated in the top part is a single hob gas cooker, inclusive of wind shield and handy shelf. The bottom pull-out part contains a cutlery tray and further storage space for cooking utensils and provisions. Built into the rear part of the kitchen is a securely locked box (with floor vent) for the gas bottle (fill weight c. 1.85 kg). With the mini kitchen on board the Caddy California gets ‘honoured’ with type approval as a motor home.

The Caddy California can as an option be configured with a large panoramic sunroof. At night the 1.4 m2 glass roof opens up a view of the stars and by day floods the interior with light. Volkswagen Commercial Vehicles has further enhanced the practical storage bag system on the rear side windows, which can take items with a weight of up to five kilograms on each side. The curtain system has also been further perfected. In bright, neutral designs, the curtains on the front side windows and rear window are again secured by magnets sewn into the fabric. The rear side windows, meanwhile, are covered by the storage bags. For the windscreen and panoramic sunroof further fasteners are used in addition to the magnets.

New ventilation openings with integrated fly screen for driver and front passenger door – securely held in place by side window panes and door frame – optimise the climate in the living space on camp sites. A new system with seamlessly dimmable LED spots provides with its warm white light individual settings of brightness above the bed, while in the opened rear hatch it is likewise LEDs that produce good lighting. Two camping chairs and a camping table – classics that are both light and practical – can be quickly stowed in a redesigned bag under the bed.

Another new feature: a new, modular tent system, which can be connected to the Caddy California. As it is free-standing, it is a tent system that can also be used separately, without the Caddy. If desired, the tent can be extended by adding a sleeping cabin. It increases the size of the living space in such a way that enough room is created on the pitch for a family and all their camping gear. Two people sleep in this case in the Caddy California and two in the new tent. Thanks to its ‘air poles’, it is quick and incredibly easy to put up. Large windows, which can also be fully opened, ensure lots of light throughout the day.

The Caddy California’s new turbo diesel engines (TDIs) are especially sustainable. Thanks to a twin SCR catalytic converter and the double injection – twin dosing – of AdBlue that it facilitates, the nitrogen oxide (NOx) emissions are significantly reduced compared the previous model. At launch the TDI engines will be available in two power output levels: 55 kW (75 PS) and 90 kW (122 PS). The efficiency of the TDI engines is further improved by the Caddy California’s new exterior design. Background note: the cw value (previous model: 0.33) has been reduced to 0.30, a new benchmark for this genre of vehicle. An important thing to know for everyone who likes to go camping off the beaten track is that, as was already the case for the Caddy Beach, the Caddy California will also be available with all-wheel drive (4MOTION) as an alternative to the standard front-wheel drive.