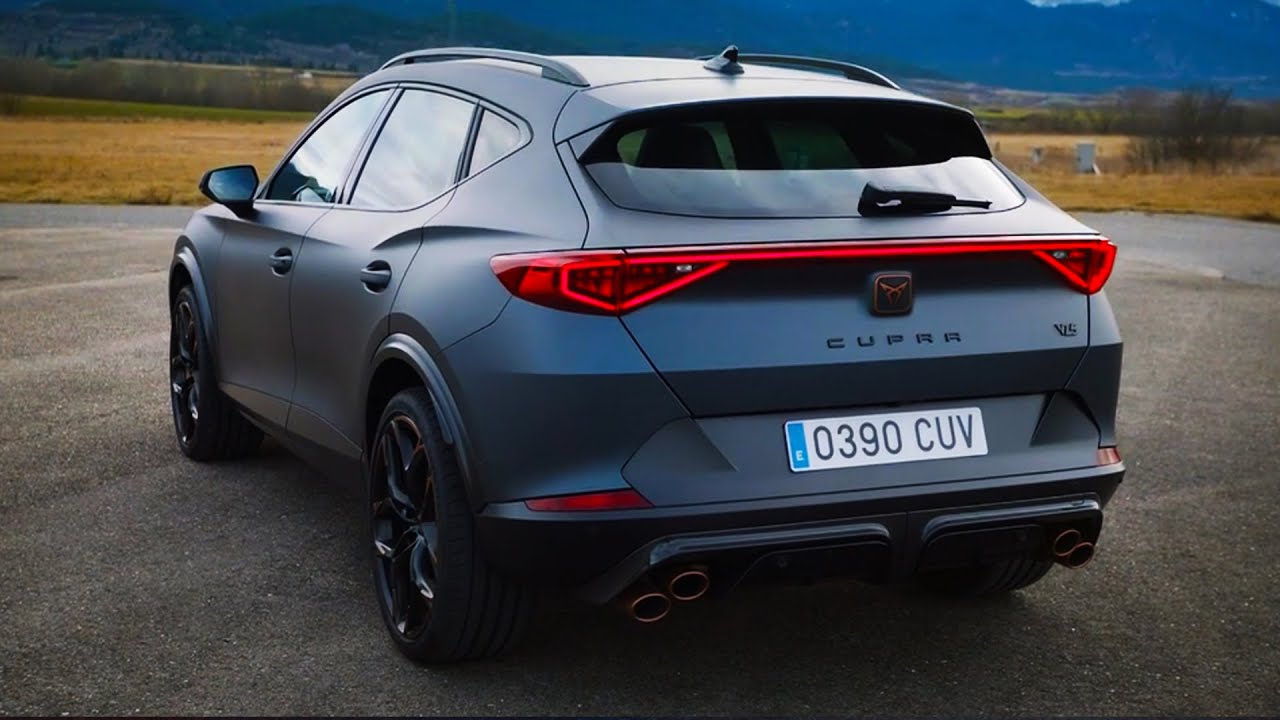 2022 CUPRA Formentor VZ 5 – Performance SUV 5 cylinder 390 PS / 480 Nm. To celebrate its third anniversary Cupra has created the Formentor VZ5, a limited production run sporty SUV with a five-cylinder turbo engine. The VZ5 is the latest variant of the coupe-SUV, joining the 1.5 and 2.0 TSI turbo petrol engines, as well as a plug-in eHybrid powertrain.

The Cupra Formentor VZ5 features a 2.5-litre five-cylinder turbocharged engine, which produces 385bhp and 480Nm of torque. The 2.5 TSI unit is linked to a seven-speed DSG dual-clutch automatic gearbox that sends power to all four of the Cupra’s wheels as part of the car’s 4Drive system.

With launch control the Formentor VZ5 can sprint from 0-62mph in 4.2 seconds and will go on to hit a top speed of 155mph.

Known for its distinctive sound, the engine in the VZ5 breathes through a quad-exit exhaust; Cupra says there is no artificial enhancement of the engine note inside the cabin.

The VZ5’s ride height has been reduced by 10mm compared with the 306bhp 2.0 TSI variant, lowering the Formentor’s centre of gravity to sharpen the handling.

Adaptive Chassis Control electronically adjustable suspension dampers are standard, offering 15 different settings. Any one of these settings can be selected manually and independently of the driving mode; these include Comfort, Sport, Individual, Offroad and Cupra – the sportiest choice. There’s a ‘Cupra’ button on the steering wheel to automatically toggle to this setting.

The car’s styling has been enhanced to reflect the VZ5’s status as the halo model. There’s a new bonnet, with more sculpting, plus large air intakes and a carbon fibre splitter that channels are into these, as well as adding downforce. There’s also a new bumper and grille arrangement lower down.

Flared wheel arches house 20-inch copper machined alloy wheels, and behind these at the front sit the car’s six-piston Akebono brake calipers (this Japanese manufacturer made the brakes for McLaren’s P1 hypercar) with 18-inch discs. There’s a carbon fibre diffuser at the rear, while the car gets black chrome ‘Cupra’ badging, too.

There are four colours to choose from for the VZ5, including a unique Taiga Grey hue reserved for this limited-run model.

Inside, there is a pair of ‘CUPBucket’ sporty seats that are available in petrol blue or black leather with brown Nappa leather accents. Buyers can also opt for graduating graphics with what Cupra calls a “copper ‘spot’ design” that matches the Taiga Grey paint.

The level of tech on offer is familiar, with the VZ5 featuring a 12-inch touchscreen infotainment system. Apple CarPlay and Android Auto are fitted as standard, while there’s a level of safety tech that you’d expect from a premium family SUV, with adaptive cruise control, plus Cupra’s Travel Assist, Side and Exit Assist, and Emergency Assist systems all fitted standard.

Speaking at the unveiling of the new Formentor VZ5, Wayne Griffiths, President of Cupra, said: “As we celebrate Cupra’s 3rd anniversary the Formentor VZ5 marks the occasion by using the highly acclaimed five-cylinder petrol engine, mixing its superlative performance with an even more sophisticated exterior design to mark the vehicle as the maximum expression of combustion performance for car enthusiasts.”

Just 7,000 examples of the Formentor VZ5 will be made, all of which will be left-hand-drive only. It’s undecided yet whether the UK will get an allocation of the production run, but Auto Express was told it’s very much Cupra’s desire to bring a number of models to the UK, so watch this space.