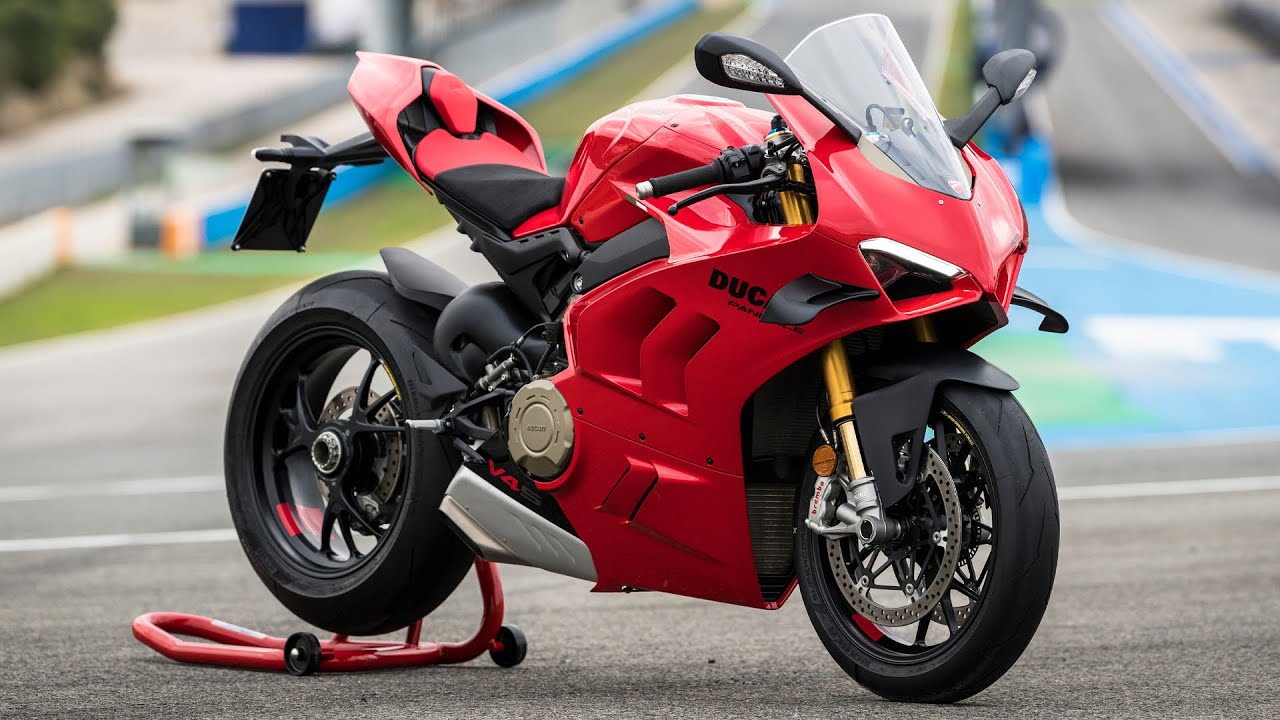 2022 Ducati Panigale V4 S – The best-performing Panigales yet. Ducati tasked its engineers with making incremental improvements to the front fork to the rear swingarm of the 2022 Ducati Panigale V4 and V4 S. The engineers and designers in Bologna responded by creating a bike that makes it just that little bit easier for riders to live with the Panigale range on the road, and extract more performance from the lineup on the track. When doing the bike’s top speed of 186 miles per hour, every little bit better is what keeps a rider a few more hairs breadths away from serious injury or worse. The engine is an example of the template for changes everywhere else: thanks to a new oil circuit and an 18% larger exhaust outlet, the 1,103-cc Desmosedici Stradale four-cylinder gains 1.5 horsepower to reach 212, and 90.6 pound-feet of torque.

That’s not much, right? But other small changes make the most of the power. Full and Low Power Modes join the revised High and Medium Power Modes. Full unlocks all the gumption free of electronic nannies in all gears save for first. Low cuts output to 150 hp and dampens throttle response for easier taming when away from the track. The ride-by-wire maps for High and Medium have been rewritten for each gear in both modes.

Ducati bolted on a new gearbox with Superbike gear ratios that increase first, second, and sixth gears. First gear is 11.6% longer, so riders can shift down to first sooner when headed into a low-speed corners and stay in it longer on the way out. There’s also a smaller jump in RPMs between first and second gear, smoothing the gearchange. Then, second gear’s been lengthened by 5.6%, again benefiting acceleration. New torque management mapping help keep the engine in the meat of the band.

The standard Panigale V4 sticks with its Showa Big Piston Fork and Sachs adjustable rear suspension, the S picks up a new Ohlins fork with incrementally softer springs and adds 0.2 inches of travel, as well as reducing the incidence of hydraulic oil cavitation and a new Ohlins rear unit. On both bikes, the rear swingarm pivot point has been raised by 0.2 inches to reduce squatting under acceleration. The V4 rides on five-spoke cast aluminum rims, the V4 S rolls with three-spoke forged aluminum wheels.

As for the bodywork, the fairing wears new winglets that are thinner yet capable of bearing the same max load as the previous units, 81 pounds at 186 miles per hour. Lower down, Ducati’s added vents to the fairing to improve cooling. The gas tank’s been reshaped to make it a better anchor when braking and more comfortable to rest one’s arms on when leaning into corners. The rear portion of the saddle’s been flattened and given a different coating, also to improve the rider’s stance while tucking, braking, and repositioning for corners.

A revised five-inch instrument screen in the cockpit aims to tell riders more about what the bike is doing on the track with less attention needed. A Track Evo display puts the tachometer on a horizontal strip at the top. There is now also a more legible gear change indicator on the top left. Beneath that, the gear indicator takes up the right-center portion of the screen. To the right of that, four horizontal bars for the DTC, DWC, DSC, and EBC electronic aids flash in four different colors when they are put to work. To the left remain the stopwatch, speed, and lap counter.