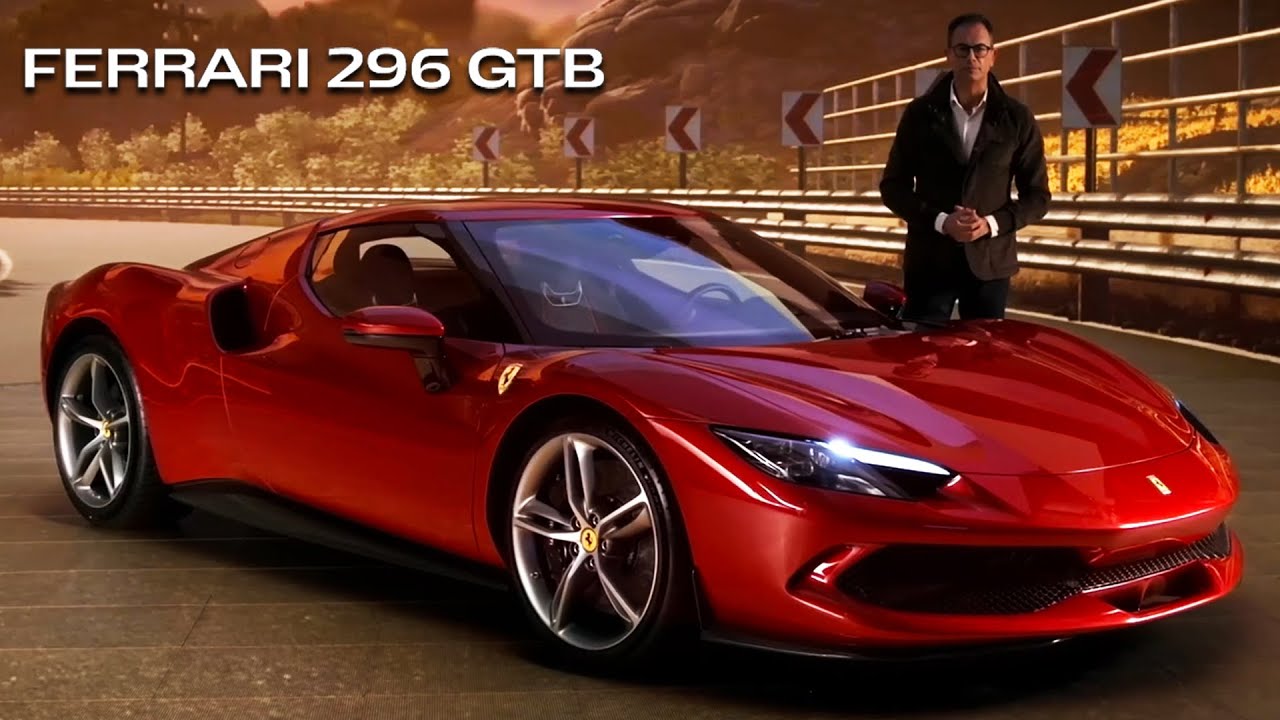 2022 Ferrari 296 GTB / 818 Hp V6 Hybrid / Gorgeous Super Sports Car. We’ve seen the next chapter of Ferrari, and boy, howdy, is the future looking bright. This is the 2022 296 GTB and it’s a stunner. After over a decade of gradually evolving from 2009’s Ferrari 458 through the 488 GTB and then F8 Tributo, the 296 GTB is here, a clean-sheet design with a wholly new six-cylinder powertrain that’s unlike anything Ferrari has ever put on the road.

No, I’m not forgetting the iconic Dino, but as that car was never branded a Ferrari. This is the marque’s first production V6 in a car wearing a Cavallino Rampante badge. Regardless, a long line of V6-powered race cars give this modern Ferrari plenty of inspiration, including the company’s current spate of Formula One machines.

Beyond its cylinder count, this engine is something quite different than what’s come before. Its 2.992-liter displacement and six cylinders give the car its name, and the wide, 120-degree vee design helps give the body its shape. The powerplant’s near-boxer profile provided plenty of room for Ferrari engineers to sit both turbos on top, situated in the hot-inner-vee layout that’s becoming de rigeur in the industry. Those IHI turbos are smaller and lighter than those on the F8 Tributo’s V8, single-scroll units said to provide better response.

Helping that, though, will be a new plug-in hybrid system. Situated between the engine and the eight-speed, dual-clutch transmission is a pancake-like electric motor that provides 122 kilowatts, or 165 horsepower. That, combined with the 654-hp engine, results in a total system output of 819. That’s upwards of 100 more prancing ponies than the F8 Tributo brought to bear from its 3.9-liter V8. The new GTB is also about 2.5 inches shorter in length than the Tributo and nearly a full inch shorter in height. It is, however, some 310 pounds heavier, with a 3,241-pound dry weight versus the F8’s 2,932 pounds.

Surely making up for a good portion of that increase is the battery pack. Yes, this is a plug-in hybrid, able to operate in full EV mode for a maximum range of 16 miles (25 kilometers), useful for those who need to make a stealthy getaway — or who commute through areas with strict emissions regulations.

All that sounds great, but what’s most striking to me about the 296 GTB is how it looks. This is the first Ferrari in a long time that I can say, without reservation, is gorgeous. I find many modern Ferraris to be striking and dramatic, head-turners for sure, but often just a little too much at times. It’s like the various platforms beneath the F8 Tributo and the 812 Superfast have been around so long they’re criss-crossed with scars from all the various nips and tucks over the years. The cleaner, simpler Ferrari Roma was a positive change and the new GTB is simply lovely. I was lucky enough to get a look at this thing in Fiorano this week and, when the sheet was lifted, I was dumbstruck.

But don’t mistake the purity of the design for something lacking sophistication. The GTB features a deployable rear wing (not unlike the La Ferrari), said to deliver 794 pounds of downforce at 155 mph, at least when equipped with the racier Assetto Fiorano package, which features subtly more aggressive styling, a more purposeful suspension and some 33 fewer pounds.

On the inside, the 296 GTB sports the same curved 16-inch gauge cluster as found on the SF90 backed by a heads-up display. Full details on the car’s tech packages aren’t yet available, but based on the positioning of the sensors, expect adaptive cruise control and blind-spot monitoring at the least.

The 2022 296 GTB is a stunning-looking thing. And just in case you’re worried about how it’ll sound, Ferrari’s press release dedicates two full paragraphs to gushing about the purity of the V12-like exhaust note, so I can’t wait to hear it at full song. Frankly, if this is what the future of reduced displacement looks like, count me in. The future starts when these hit the road in Q1 of 2022.