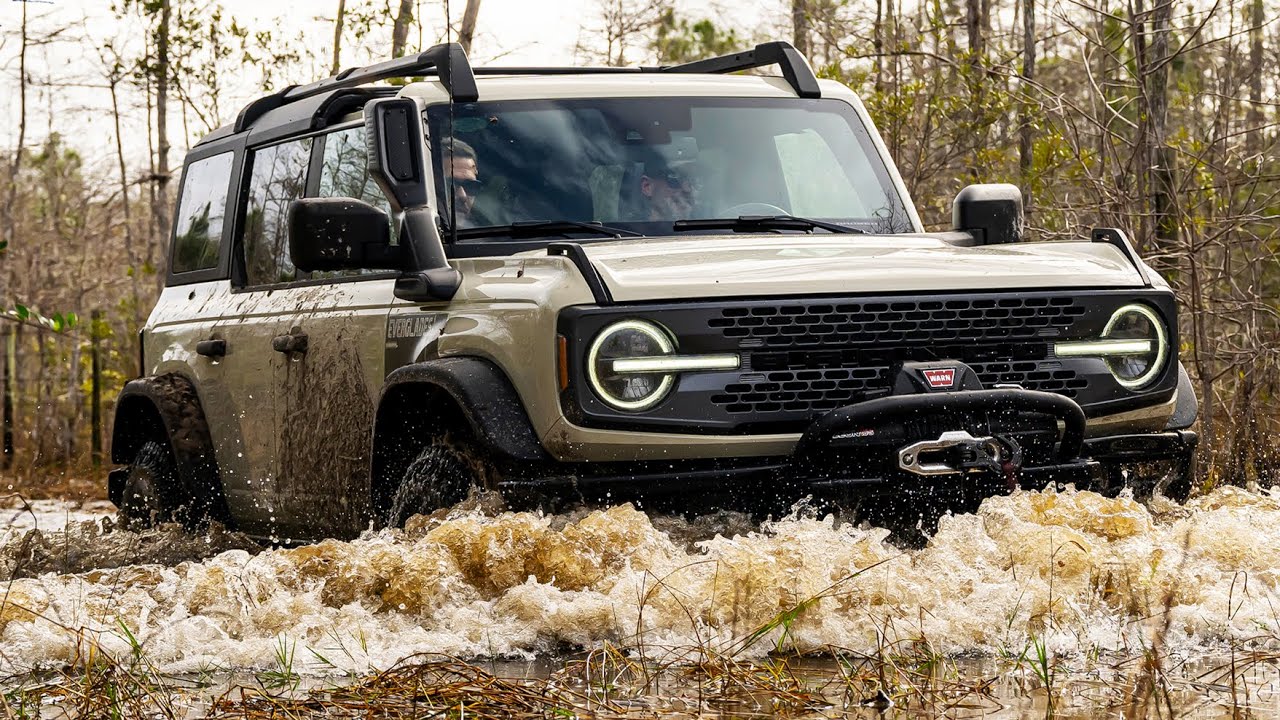 2022 Ford Bronco Everglades / Built for Extreme Off-Road Adventures. Two new Ford Bronco models will arrive this summer: the recently revealed high-performance Bronco Raptor, and this new Everglades model that adds a few more bits of off-road hardware to the already capable Sasquatch package. Both come only as a four-door model with a hardtop and are more hardcore options for off-roaders—or mall crawlers.

That aforementioned Sasquatch package already includes things like 35-inch tires, a lifted suspension, front and rear locking differentials, and a shorter final drive ratio. Everglades models add mud-terrain tires mounted on 17-inch wheels and a factory snorkel mounted to the A-pillar. The front and rear axles, transfer case, and transmission cooling vents are also raised to allow for a maximum of 36.4 inches of water fording depth, 2.9 inches higher than the regular Bronco Sasquatch.

Ford also fits the optional heavy-duty modular front bumper and safari bar on the Everglades with an integrated Warn Zeon 10-S winch. Ford says it tested the winch at its chassis test facility and claims that it can pull up to 10,000 pounds with its 100-foot line. The Everglades also comes with rock rails and steel skid plates protecting the underbody.

A new Desert Sand exterior color is exclusive to the Everglades, and the other color choices are some of the Bronco’s best: Eruption Green, Cactus Gray, Area 51, and Shadow Black. It gets a carbonized grey grille with gloss-black Bronco lettering and an Everglades topography graphic stamped on the front fender. Everglades come standard with the 12.0-inch touchscreen and vinyl seats, washout floor mats, and green stitching.

You’ll have to settle for the Bronco’s turbocharged 2.3-liter four-cylinder that produces 300 horsepower and 325 pound-feet of torque and pairs with a 10-speed automatic. That’s the only powertrain choice for the Everglades, even though other Bronco models offer a seven-speed manual with the four-cylinder and a 330-hp twin-turbocharged 2.7-liter V-6 as an option. Ford says there are no plans to add any other powertrain options to the Everglades.

The 2022 Bronco Everglades will arrive this summer starting at $54,495, which is $3525 more than a four-door Wildtrak, and reservations will open in March. The new model is exclusive to current Bronco reservation holders, and those who haven’t received a build date can switch their order to an Everglades—or to the 400-plus-hp Raptor, which will arrive in the same timeframe.