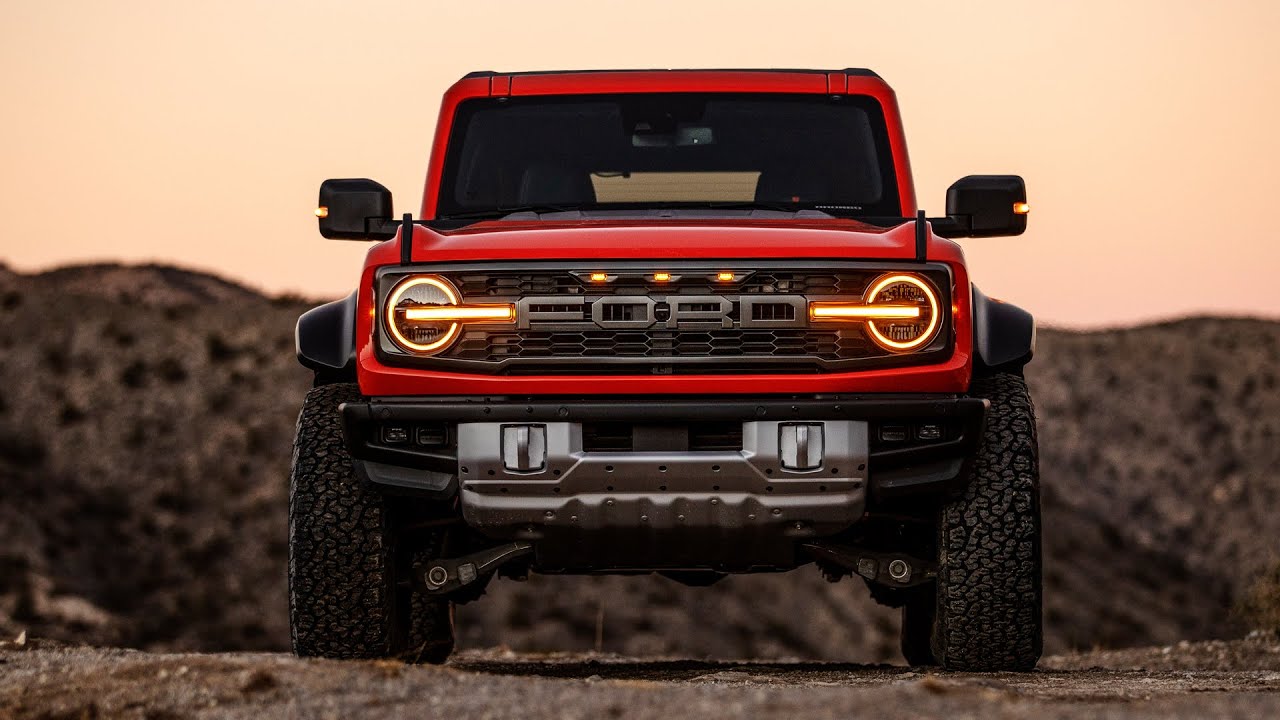 2022 Ford Bronco Raptor – a 400 HP Desert Runner SUV. As if the Ford Bronco wasn’t already in high demand, the 2022 Ford Bronco Raptor is now revealed to further fuel the frenzy. Utilizing an extensively upgraded chassis with more suspension travel, more ground clearance, and a wider track to make use of more than 400 horsepower under the hood, there’s every reason to believe it will succeed both off the beaten path and in dealer showrooms as a halo vehicle for the Bronco brand.

“We poured all of our passion and all of our Bronco and Raptor know-how into creating this absolute desert-racing beast,” said Ford CEO Jim Farley. “It’s the real deal. It’s not for show and it’s not for everybody. But for people who love to get out in the wild, it’s the ultimate. And only Ford could create a Bronco Raptor.”
More Power And More Strength To Use it

Let’s answer the big question right away, though we must point out that Ford isn’t ready to offer total information just yet. Instead of a warmed-up 2.7-liter V6, the Bronco Raptor gets a twin-turbocharged 3.0-liter EcoBoost V6 making at least 400 horsepower (298 kilowatts). Final figures for power and torque haven’t been established yet, but this engine already churns out 400 hp and 415 pound-feet (563 Newton-meters) of torque in the Explorer ST. Ford says the engine will have a specific tune for the Raptor and breathe through an upgraded induction system with enhanced intercooling and a true-dual multi-mode exhaust system.

The only transmission offered is the 10-speed automatic that can be paddle-shifted should drivers desire a bit more involvement. Power is routed through larger driveshafts front and rear, connecting to upgraded Dana axles shared with the decidedly not street-legal Bronco DR racing SUV. The 4×4 system features an upgraded transfer case, a higher capacity clutch, and the Baja Mode is tweaked to include, among other things, an anti-lag system. Bronco Raptor also gets a tow/haul mode with a maximum towing capacity of 4,500 pounds.
Suspension Inspired By Ultra4 Racing

More power is always nice, but the real news comes with prolific suspension upgrades that draw from the hardcore Ultra4 Racing series. The aforementioned axles are part of that, but it continues with an upgraded High-Performance Off-Road Stability Suspension (HOSS) system that adds Fox semi-active dampers similar to those on the F-150 Raptor. Sensors monitor suspension height and terrain conditions to adjust damper settings on the fly; it all connects to a reinforced frame with stiffer shock towers up top and front/rear control arms developed by Ford Performance down low.

As a result, the Bronco Raptor has 13.0 inches of suspension travel in the front and 14.0 inches at the rear, an increase of 60 percent forward / 40 percent aft versus a base model Bronco. The stance is 8.6-inches wider, and with extra frame support coming from reinforced B- and C-pillars, the Raptor has 50 percent more torsional rigidity. Minimum ground clearance is up to 13.1 inches, and should drivers use every inch of it, skid plates underneath cover all vital components.
Widebody From The Factory

Two types of 17-inch beadlock-capable wheels are offered, wrapped in 37-inch BFGoodrich K02 tires that Ford says are the largest ever offered on a factory-stock SUV in the States. An upgraded electric steering rack and tie rods help handle the beefy rubber, and with the massive fender flares in place, the Bronco Raptor is a full 9.8 inches wider than a standard model. Flares aren’t the only exterior upgrades, however – Ford swaps out the fenders, quarter panels, and hood for Raptor-specific parts. Door appliques are part of the package, and of course there’s the trademark Raptor grille with bold Ford branding leading the way.

Additional visual upgrades include unique daytime running lamps and a modular front bumper from Ford Performance with built-in tow hooks. An available Bronco Raptor Graphics Package jazzes up the exterior with splatter patterns, and yes, the Raptor will get Code Orange as an exterior color option. There’s more Code Orange inside with trim, not to mention the 12-inch digital instrument cluster featuring a special Raptor setting. Bronco Raptor also gets a thicker steering wheel, upgraded seats from Ford Performance, special trim options, and the High Package is included as standard equipment.
Price And Availability

As we said at the beginning, Ford isn’t ready to divulge all Bronco Raptor information just yet. There’s not even a hint of the Bronco Raptor’s base price, but it’s worth noting the Jeep Wrangler Rubicon 392 with 470 hp (350 kW) starts just under $75,000. Order books open in March, but an expected production launch isn’t available. Ford does call this a 2022 model, so it will reach dealerships later this year.