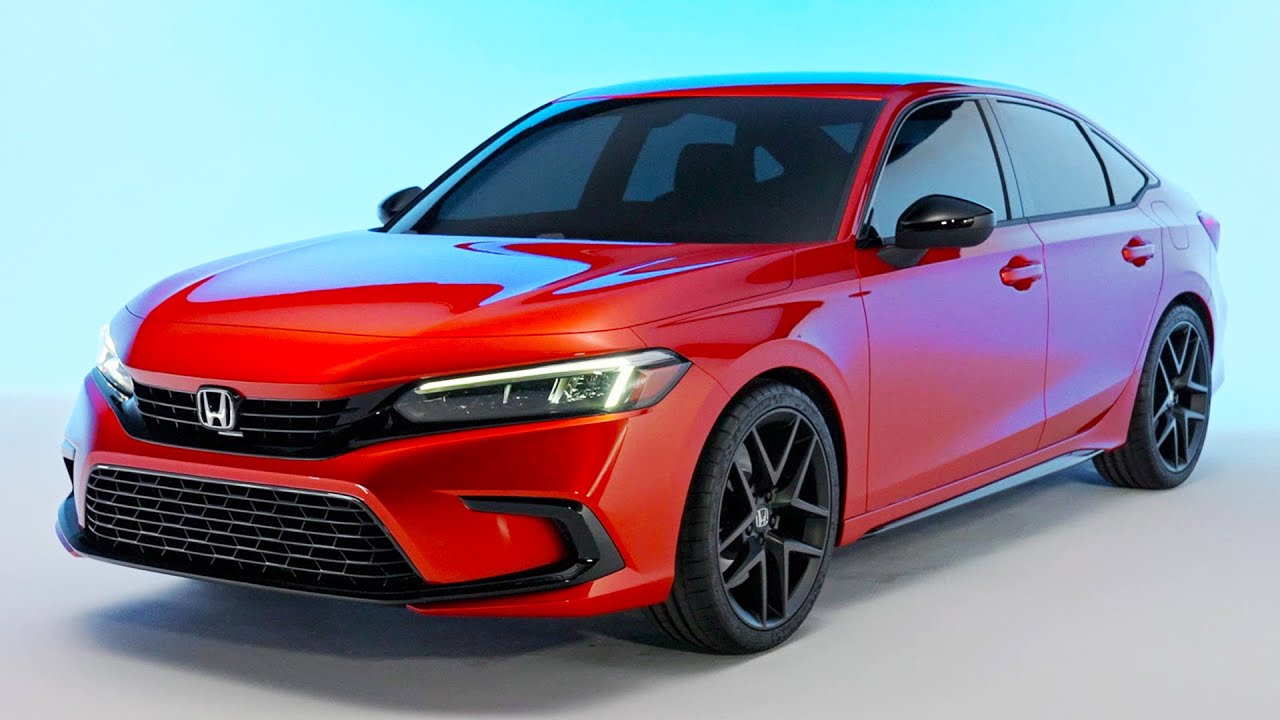 2022 Honda Civic – Looks more premium, Better Tech, More Safety. The Honda Civic is nearly 50 years old. The very first example rolled off the production line in Japan way back in 1972, and the small sedan (and hatchback) has been a staple since landing in the US just a few years thereafter.

As the Civic closes in on nearly a half-century, the four-door is getting a modest makeover for its 11th generation. Though this is just a prototype, Honda says it is representative of the production car that will arrive sometime early next year. While riding on the same platform as the current model, the 2022 Civic will have all-new styling for the exterior and interior, better tech, more safety features, and even a few fresh exterior paint options.

The 2022 Honda Civic sedan prototype features a brand-new front end with a more pronounced grille and sharper headlights with LED daytime running accents (there’s a light demonstration in our first look video). The new cues are meant to give the Civic a meaner look, while also keeping the design relatively simple. The rest of the body, meanwhile, maintains the same athletic proportions and low ride height as the 10th-generation model on which it’s based, but looks a touch smoother with new side detailing, a crinkled C-pillar (a la Cadillac), and more pronounced detailing both front and back. Honda has told us the new design is meant to make the Civic look lower and wider than before, despite being almost identical in size to its predecessor.

The rear end of the Civic prototype is much bolder than before with larger split taillights (so long, light bar) within a smoked housing. We’re not sure if the darker finish will carry over to production – at least, not on the base model. A subtle “trailing-edge” spoiler gives the Civic a more sweeping look in profile while helping with aerodynamics, and the dual exhaust tips on the prototype offer a sportier take. This car is finished in Solar Flare Pearl paint and includes 19-inch black wheels, both of which Honda will eventually offer on the production car.

The 2022 Honda Civic will come in two body styles: sedan and hatchback. The company has already announced the discontinuation of the coupe, but the Si sedan and Type R hatchback will live on into the next generation and still offer standard manual transmissions.

Inside is where the 2022 Honda Civic sees the most dramatic changes. The lone rendering the company provided shows a flat, horizontal dash design and very few buttons. The goal, Honda says, was to maintain the Civic’s focus on great ergonomics and visibility. According to designers, the overall theme is meant to mimic the simplistic layout of the all-electric Honda E’s interior.

The design itself previews modest changes to the trim pieces and overall layout. The most notable of the new elements is the honeycomb-like accent that stretches from below the touchscreen toward the passenger-side dash. Look closer and you’ll notice that the trim piece conceals the HVAC vents, giving the impression of one continuous design element. And rather than embedded within the dash, the touchscreen now sits atop it.

The central touchscreen inside of the Honda Civic grows from 7.0 inches in the current model to a more robust 9.0 inches here in the prototype. The new interior design also sees the larger screen move to the top of the dash, iPad-style, rather than embedded within it. The Civic is also the first Honda product to offer a completely digital instrument cluster.

As far as safety, the Honda Civic has always been one of the safest options in the segment. The current 2020 model gets the brand’s Honda Sensing suite of active safety equipment standard with every trim level. We expect the 2022 Civic will be even safer. While the company isn’t keen to share specifics yet, Honda says the new Civic will have “multiple new active and passive safety systems,” which includes upgrades to the lauded Honda Sensing suite.

Like we said, this is just a prototype. The real 2022 Honda Civic likely won’t show up until early next year before hitting dealerships shortly thereafter. But we won’t know the specifics on when the new Civic launches until the production version officially debuts sometime in the first quarter of 2021.

Official pricing of the 2022 Honda Civic, meanwhile, will come even later. The current Honda Civic starts at $21,050 for the base LX model, and the range-topping Touring trim starts at $28,100. That’s not including the hot Honda Civic Type R hatchback, which starts at $37,495 for 2021. Since the 2022 Civic is pretty significant overhaul, we expect that version to cost around the same price when it goes on sale, if not get a slight increase.