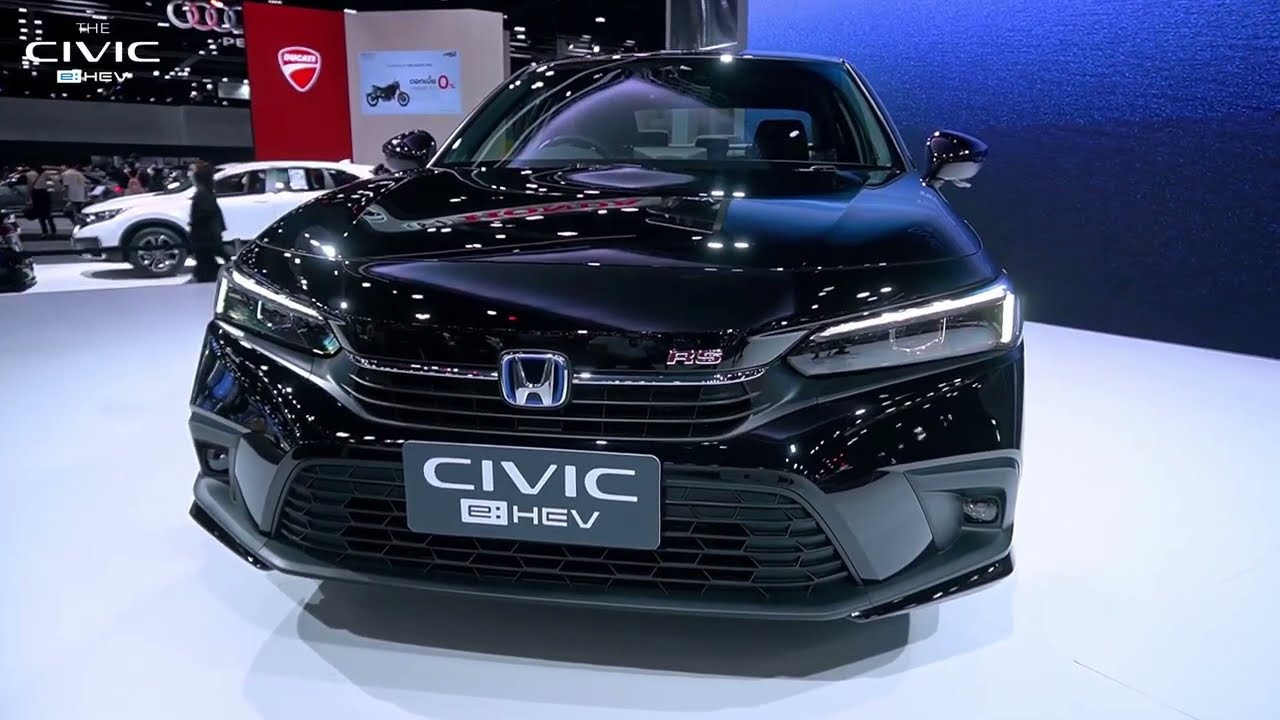 Barely any time has passed since the Honda Civic e:HEV was revealed in Europe, yet the new hybrid model has already made its Southeast Asian debut at the ongoing 2022 Bangkok International Motor Show. As predicted, the petrol-electric variant of the C-segment contender arrives in the Land of Smiles in sedan form, making this a world premiere of sorts.

Two variants will be offered, EL+ and RS – the latter replacing the standard VTEC Turbo version. Honda Thailand is promising prices of under 1,150,000 baht (RM114,300) and 1,270,000 baht (RM159,400) respectively, meaning that the base hybrid model will be around RM17,000 more expensive than the top petrol trim, also badged EL+. The car will receive its official launch in June.

The e:HEV gets the same powertrain configuration as the European-spec model, which means it gets a new direct-injected version of the Accord Hybrid‘s 2.0 litre naturally-aspirated Atkinson-cycle four-cylinder engine. The company previously said it has made several tweaks to achieve a thermal efficiency of 41% – one of the highest figures on a production vehicle.

Honda continues to keep mum on the outputs, but as reference, the mill in the larger model produces 145 PS at 6,200 rpm and 175 Nm at 3,500 rpm. Most of the time, however, the Civic e:HEV will be powered by an electric motor, and while the carmaker’s Thai arm has again not revealed outputs, its European division has already confirmed it produces 135 kW (184 PS) and 315 Nm of torque. With the new petrol engine expected to be more powerful, the Civic should eclipse the Accord’s total power figure of 215 PS.

Other details revealed in Europe include a new 72-cell battery – part of the smaller and lighter Intelligent Power Unit sitting under the rear seats – and a compact Power Control Unit that is now situated under the bonnet with the rest of the powertrain. The company targeted a combined WLTP fuel consumption figure of under 5.0 litres per 100 km and carbon dioxide emissions of less than 110 grams per kilometre.

While Europe gets the Civic e:HEV as a hatch, the ASEAN market will receive the sedan as the sole option. Blue-tinged Honda logos and e:HEV badging are the only ways to spot the hybrid, which otherwise appears identical to the regular VTEC Turbo models. However, the RS now gets 18-inch alloy wheels (in a different two-tone design compared to the all-black Y-spoke rollers on our RS), which are an inch larger than before.

Inside, the Thai Civic e:HEV improves on the VTEC Turbo’s specs by offering rear air vents and a 60:40 split-folding rear seat. Those items were already fitted to Malaysian models, although our northern neighbours counter this by continuing to receive a 10.25-inch digital instrument display, a Qi wireless charger and a smart key card – none of which we get.

Safety-wise, the Thai model comes as standard with the Honda Sensing suite of driver assistance systems, as is the case with the rest of the region. This incorporates autonomous emergency braking, adaptive cruise control with stop-and-go, lane centring assist, lane keeping assist, auto high beam and front departure alert. The LaneWatch blind spot camera is also offered, as before.
———
Hope you enjoy this video and leave your comment bellow. To stay up to date with alot of new Videos