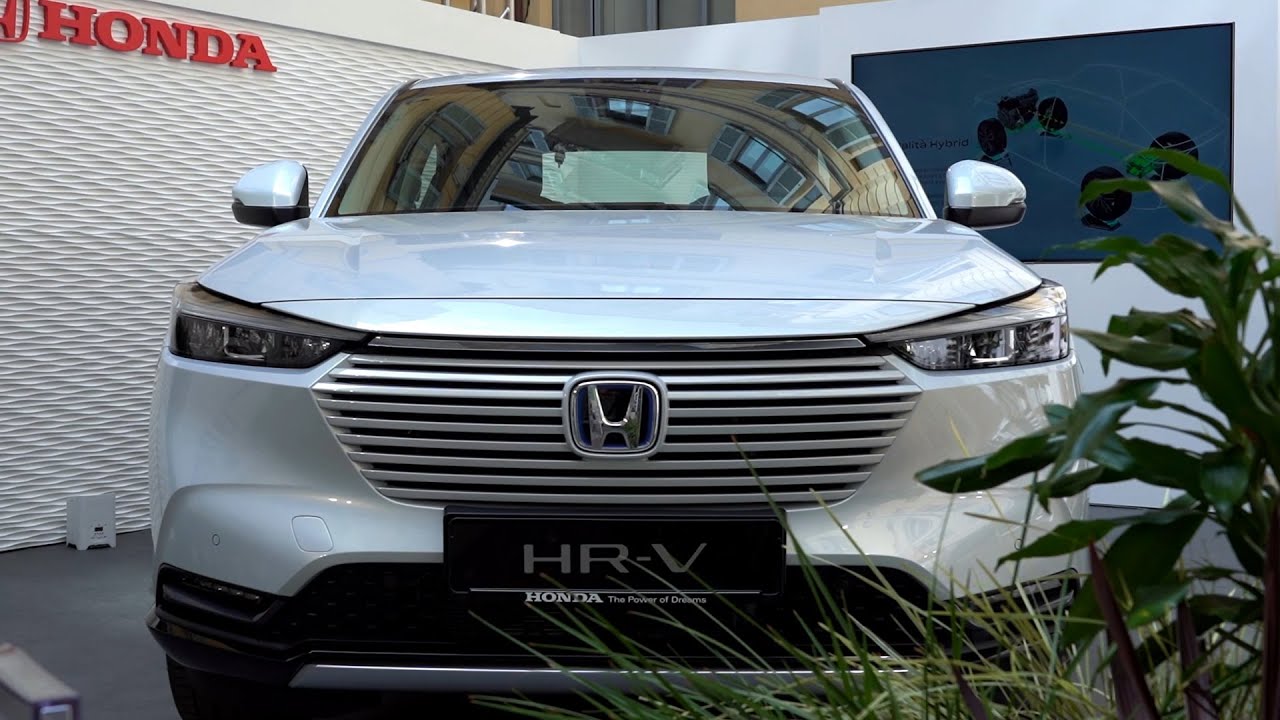 The new Honda HR-V hybrid costs from £26,960. Entry-level models come in ‘Elegance’ trim, which gets LED headlights, 18-inch alloy wheels and heated front seats as standard. The next model up is the £29,210 Advance trim, which adds an electronic opening and closing boot lid, a heated steering wheel and part-faux leather interior trim.

Pick an ‘Advance Style’ model for £31,660 and you also get an upgraded stereo, orange interior trim pieces and two-tone exterior paint. The new HR-V is on sale now and the first UK deliveries are expected in late 2021.

The Honda HR-V has been given a whole new design, said to be inspired by two-door coupe cars. At the front, a large body-coloured grille sits within a rather simplistic bumper that’s topped by thin LED headlights.

A sloping roofline drops into a small roof spoiler and a rear end that’s just as minimalist as the front. There’s an LED light bar stretching the width of the car between two sleek brake lights.

The new Honda HR-V comes with 18-inch wheels as standard across the range.

The new Honda HR-V will come with a hybrid engine as standard – much like the latest Honda Jazz.

In fact, it uses the same setup as the Jazz. This sees a 1.5-litre petrol engine linked up to a pair of electric motors that produce a total of 131hp and 253Nm of torque.

The new HR-V isn’t a plug-in hybrid, instead the car’s petrol engine acts as an onboard generator for the electric motors and boot-mounted battery. The HR-V’s computers can automatically decide whether it should run on electricity alone, petrol power or a mix of the two.

The Honda HR-V sends its power through a CVT gearbox, which works like an automatic albeit with a single ‘gear’ – instead if constantly adjusts the gear ratios to keep the engine revving at its most efficient speed. There is no option for a manual gearbox.

Much like its exterior, the new Honda HR-V’s interior is simple and pragmatic in its design. It’s apparently just as roomy as the old car as a result of some packaging trickery, and its fairly uncluttered layout should help give it more of an airy feel, too.

There’s a 9-inch LCD infotainment system mounted on the dashboard, with new software that Honda says is more responsive than the outgoing HR-V’s touchscreen. It also comes with wireless Apple CarPlay, although you’ll still need a cable to use Android Auto.

There’s also a 7-inch display within the dials that can display safety assistance info alongside your current speed.

Honda’s signature cinema-style ‘Magic Seats’ in the back can be flipped up to give the HR-V a bit more space in the boot.

Honda’s ‘Sensing’ package of safety tech comes to the new HR-V. This brings a system that can detect pedestrians and swerve out of the way to avoid hitting them, as well as automatic emergency braking.

Adaptive cruise control is offered too, along with blind-spot monitoring and hill descent control.