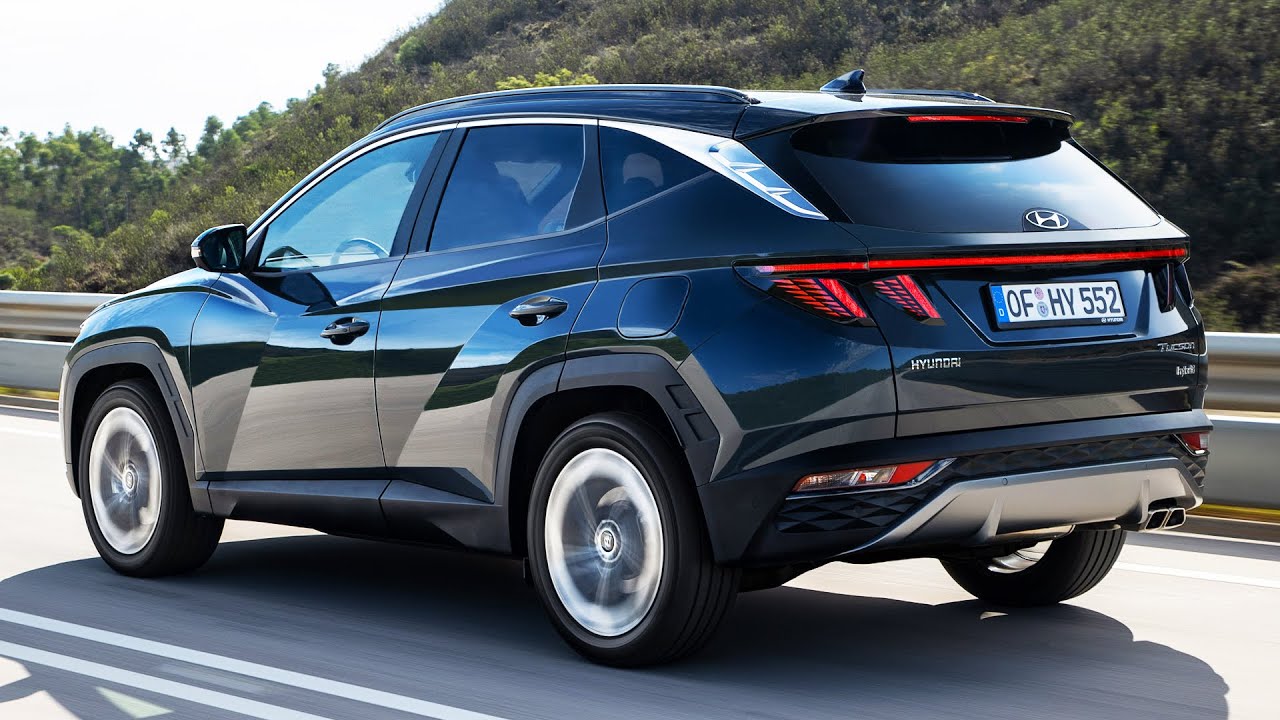 2022 Hyundai Tucson Hybrid – A worthy rival to the RAV4 and the CR V. The popular Hyundai Tucson SUV has been completely revamped for 2020 with a whole host of new features designed to tempt you away from the likes of the Kia Sportage, VW Tiguan and SEAT Ateca.

Design
The new Hyundai Tucson looks bolder than you’d expect from a practical family SUV. The first thing you’ll notice is that huge grille made from interlocking triangles that blends into the car’s daytime running lights. The headlights are housed in separate pods that look like contrasting air intakes under this broad grille.

On each side, the new Hyundai Tucson has all sorts of sharp edges and creases – the sort you’d expect to see on a Lamborghini, not a family SUV. The squared-off wheel arches and thick black side skirts exaggerate the car’s ground clearance – much like the similar features on the Toyota RAV4 – while a contrasting silver trim above the windows stops it looking too top-heavy.

The new car’s rear-end looks just as dramatic as the front and sides – it’s packed with angular features and contrasting trim. The brake lights now join together in one full-width strip with a pair of tooth-like downturned points at each side. There are also some chunky silver and black bumper trims and what look like real exhaust pipes.

Interior and infotainment
The new Hyundai Tucson comes with a completely new interior design that looks far more futuristic than the old car’s. It’s super simple and very minimalist, with a large central touchscreen, a black glossy pane of touch-sensitive buttons and a 10.25-inch display that replaces conventional analogue dials.

As standard, the Hyundai Tucson comes with an eight-inch central touchscreen but higher-spec cars get a 10.25-inch display. Both versions come with smartphone mirroring for Apple and Android phones so you can use your preferred apps through the car’s touchscreen. There’s also a dedicated Hyundai Bluelink app that lets you lock and unlock your car and check the fuel level remotely.

Engines and hybrids
The new Hyundai Tucson will come with a range of petrol, diesel and hybrid engines. The range kicks off with a 150hp 1.6-litre petrol engine that comes with a six-speed manual gearbox as standard and is available with either front- or four-wheel drive. There’s also a 115hp 1.6-litre diesel engine with the same manual gearbox but it’s only offered with front-wheel drive.

There are three mild-hybrid models that use an electric motor to give the engine a boost when you accelerate and help reduce fuel consumption when you’re cruising. These come in 150hp and 180hp 1.6-litre petrol-hybrid and 136hp 1.6-litre diesel-hybrid trim. The petrol hybrids are offered with a six-speed manual or seven-speed automatic gearbox and the diesel hybrid comes with an auto ‘box as standard.

Hyundai will also launch a plug-in hybrid Tucson fitted with a more powerful electric motor and a 1.6-litre petrol engine. This car will produce 265hp but Hyundai hasn’t confirmed how far you’ll be able to travel on a single charge or what fuel economy you can expect it to return.

Driving and safety
The new Hyundai Tucson will be offered with electronically adjustable suspension that’ll let you choose between softer, more comfortable setups and firmer, sportier ones. This is the sort of thing you’ve been able to get in hot hatches and sporty SUVs for a while, but it’s less common in family-focused models.

There’s also a raft of new safety features – although Hyundai hasn’t confirmed which will come as standard and which will cost extra. You’ll be able to get a surround-view camera system, blind-spot warning, lane-keeping assist, adaptive cruise control and automatic emergency braking.

Practicality
In terms of practicality, you get three-way split-folding rear seats as standard and the Hyundai Tucson’s boot has grown by between 33 and 107 litres (depending on the specific model you choose). Petrol-powered cars have 620 litres of space, diesel models get 598 litres and plug-in hybrid cars muster 616 litres of room. That’s approximately the same as the 615 litres of space you get in a Volkswagen Tiguan.

It’s worth noting that mild-hybrid versions of the Hyundai Tucson lose out on around 45 litres of space to their standard petrol- and diesel-powered counterparts. Their batteries have to go somewhere, after all…

Price and release date
Hyundai has confirmed that the new Tucson will go on sale in late 2020, but you’ll have to wait until later in 2021 to get your hands on the plug-in hybrid model. You can expect the new Hyundai Tucson to cost slightly more than the outgoing car across the range – after all, all that new tech doesn’t come cheap. Entry-level cars should cost from around £25,000 while top-spec plug-in hybrids will set you back more than £40,000.