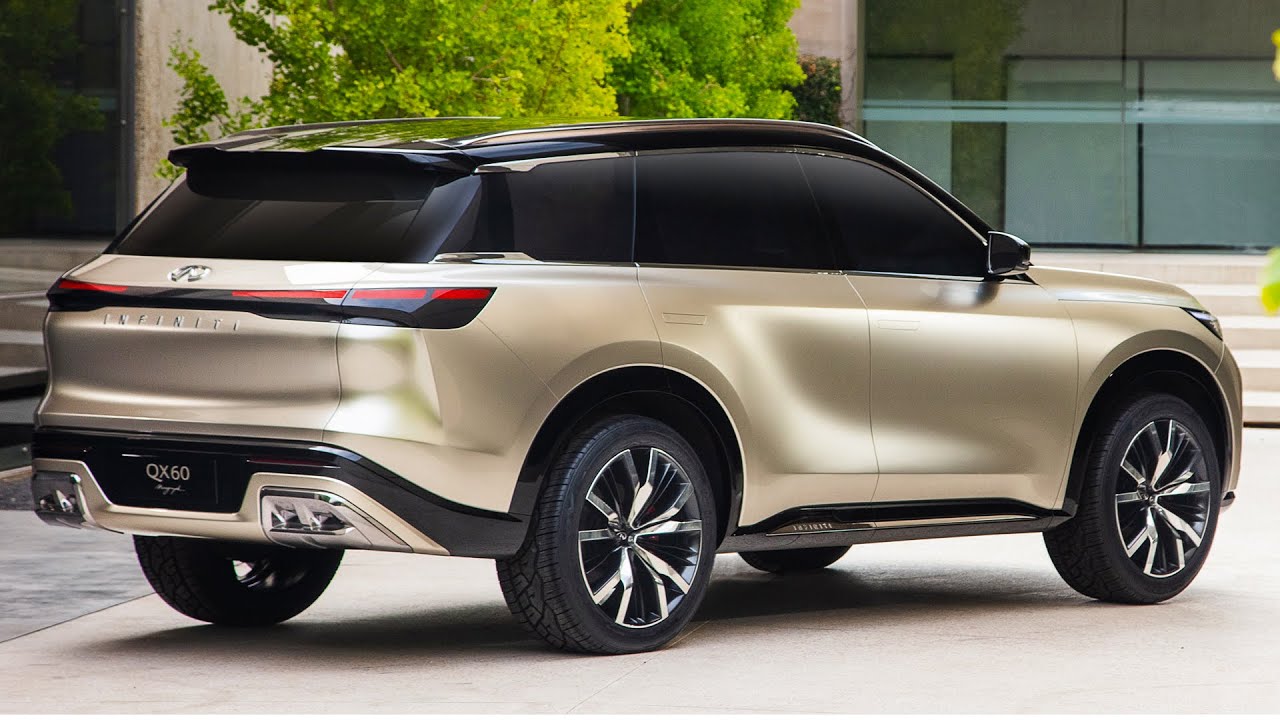 2022 Infiniti QX60 – Next-Gen luxury three-row SUV. Infiniti revealed the QX60 Monograph, a near-production concept showing that the redesigned 2021 QX60 will be a dramatic departure from the current look of the SUV.
The QX60 Monograph is a sleeker and more trucklike vehicle than the outgoing model, with a more imposing and aggressive appearance.
The production QX60 will go into production sometime in 2021.

The second-generation Infiniti QX60 is on the way, but before the production version comes into view, the Japanese automaker is showing off the QX60 Monograph, a near-production concept of the three-row SUV. And although Infiniti isn’t showing us the interior quite yet, the QX60 Monograph is signaling that the 2021 QX60 will take on a sleek design which rethinks this SUV.
The grille of the concept maintains the trapezoidal shape seen across the lineup and adopts chrome styling to make the grille more pronounced. Similar to other luxury vehicles on the market, the grille also gets a bit bigger, at least from what the photos suggest. The headlights become narrower and significantly more aggressive-looking, and the daytime running lights meet the grille at the top edges on each side of the car, as on the 2020 QX60. The lower intakes are also similar, but the concept drops the lower lights.

Beyond subtle lines on the hood and the rear corners, the QX60 Monograph is covered in sheer surfaces devoid of many lines, giving the SUV a clean, futuristic look. Retracting door handles blend into the smooth surface, similar to the taillights, which lie flush with the body. Most notably, the QX60 Monograph drops the kinked window line on the D-pillar, which had been a design staple in Infiniti SUVs. With that, the concept adopts a floating roofline to make this SUV dramatic and eye-catching.

The concept’s proportions lend it a more trucklike feel than the outgoing model as well. The windshield line is pushed back, making the now square hood appear bigger. The hood is also less sloped downward at the grille, giving it a more stately and imposing position. Yet, for all of the changes the QX60 Monograph sees from the previous generation, its appearance doesn’t deviate much from the growing field of SUVs. Notice how closely it resembles competitors such as the Lincoln Aviator and the Range Rover Velar.

The current-gen QX60 is powered by a 295-hp V-6, paired with a continuously variable automatic transmission (CVT), but we speculate that its powerplant and transmission will change for 2021. It’s possible that the company’s variable-compression turbocharged four-cylinder or the 400-hp twin-turbo 3.0-liter V-6 from the Q50 Red Sport could make their way into the 2021 QX60. Whatever the new engine is, we also expect it to be mated to a seven- or eight-speed automatic transmission.