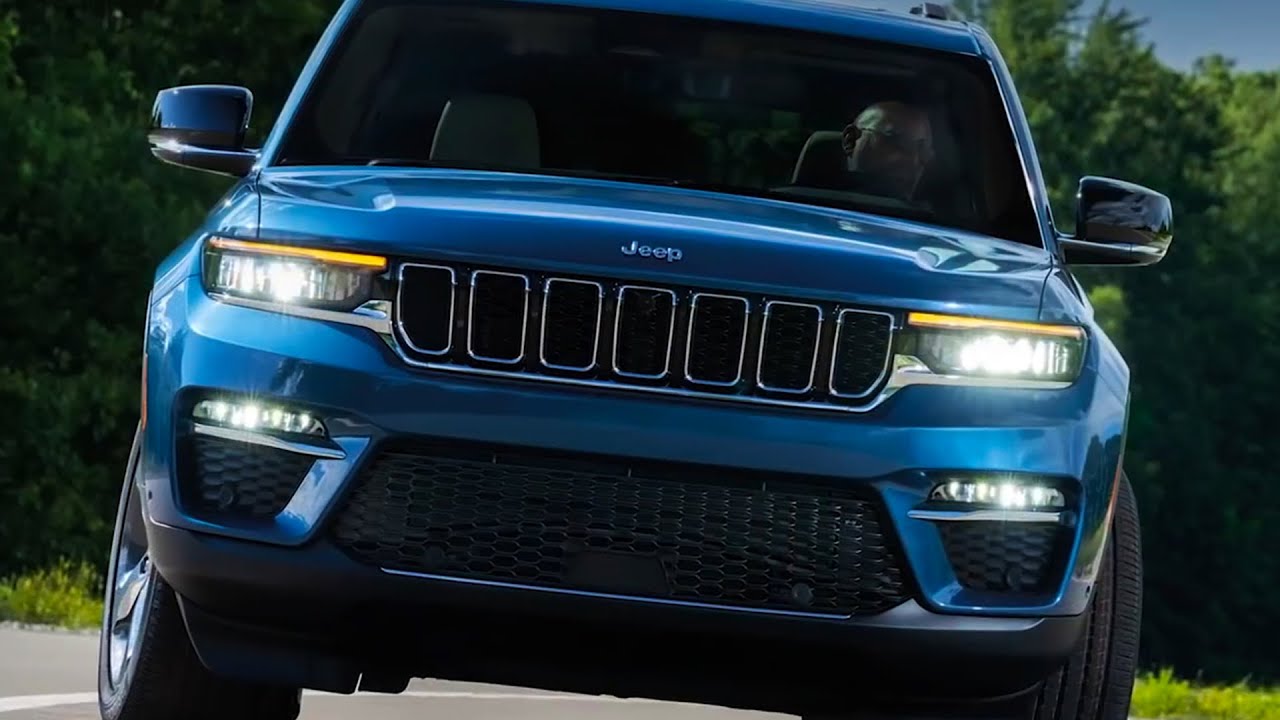 2022 Jeep Grand Cherokee – More tech, Luxury and Off-road Capability. Jeep has revealed the two-row version of the new Grand Cherokee.
The 2022 Grand Cherokee will offer a plug-in-hybrid model called 4xe.
There’s also a Trailhawk off-road trim level that can be combined with the hybrid powertrain.

The Jeep Grand Cherokee has classically been a mid-size SUV with two rows of seats. But Jeep flipped the script with the latest generation, introducing the fifth-generation SUV’s redesign first with a new three-row L model. The company is now getting around to launching the standard-wheelbase version of the new model, and the 2022 Grand Cherokee will arrive in the U.S. later this year to replace the outgoing 2021 two-row model that’s currently being sold alongside the new Grand Cherokee L.

The two-row Grand Cherokee has a five-inch shorter wheelbase than the three-row model, and it’s nearly a foot shorter in overall length. But the styling is similar to the Grand Cherokee L’s aside from some trim differences and unique wheel designs. The rear end looks a bit sleeker and features a floating pillar design.

Inside, the biggest difference is the seating setup. A three-place second-row bench makes for five-passenger capacity, and neither a third row nor second-row captain’s chairs are available like you’ll find in the L. The dashboard is otherwise similar and offers a digital gauge cluster as standard along with central infotainment screens ranging from 8.4 to 10.1 inches depending on trim level. There’s even an optional screen available for the front passenger that can display functions including audio and navigation.

The two-row model also differentiates itself with a broader lineup that includes an off-road Trailhawk model and a 4xe plug-in-hybrid variant. These two configurations can even be combined into a single Grand Cherokee that offers the opportunity for electric driving in off-road settings. We’ve detailed the 4xe powertrain separately, but the basics are the same as in the Wrangler 4xe: a total of 375 horsepower and 470 pound-feet from a turbocharged 2.0-liter inline-four gasoline engine plus two electric motors. Jeep claims an electric driving range estimate of 25 miles on a full charge.

The nonhybrid powertrains are the same for the two-row and three-row models. A 3.6-liter V-6 with 293 horsepower and 260 pound-feet of torque is standard, while a 5.7-liter V-8 with 357 hp and 390 pound-feet of torque is optional. Rear-wheel drive is standard with the V-6 and a choice of several different four-wheel-drive systems are optional, while the V-8 comes only with four-wheel drive. An eight-speed automatic is standard across the board.

The trim levels comprise Laredo, Limited, Trailhawk, Overland, and Summit, with the V-8 optional on the latter three models. The 4xe hybrid setup is available on all but the base Laredo. There’s a wide range of equipment levels contained within the broad lineup, with the Laredo making do with cloth seats, 17-inch wheels, and black plastic exterior trim and the Summit loading up with tons of chrome, 20-inch wheels, fancy leather upholstery, and a McIntosh audio system.

Many driver-assistance features are standard equipment, with the notable optional systems including a 360-degree camera system, drowsy driver detection, and a night-vision camera. A trailer-towing package is also optional; the V-6 can tow up to 6200 pounds, the V-8 up to 7200 pounds, and the 4xe up to 6000 pounds.

The only versions of the Grand Cherokee that earn Jeep’s “Trail Rated” badge are the Overland with an optional off-road package and the Trailhawk. The Trailhawk features Goodyear Wrangler Territory all-terrain tires, an air suspension with increased ground clearance, and the most sophisticated four-wheel-drive system called Quadra-Drive II that has a transfer case and an electronic limited-slip rear differential. It also has skid plates, red tow hooks (blue if you opt for the 4xe), and a hood decal.

Jeep has yet to announce prices for the 2022 Grand Cherokee lineup, but we expect it to start a few thousand dollars lower than the Grand Cherokee L, which ranges from $40,570 for the base Laredo up to $64,194 for a Summit Reserve. Nonhybrid models will go on sale first, in the fourth quarter of 2021, while the Grand Cherokee 4xe will arrive in the U.S. in early 2022.