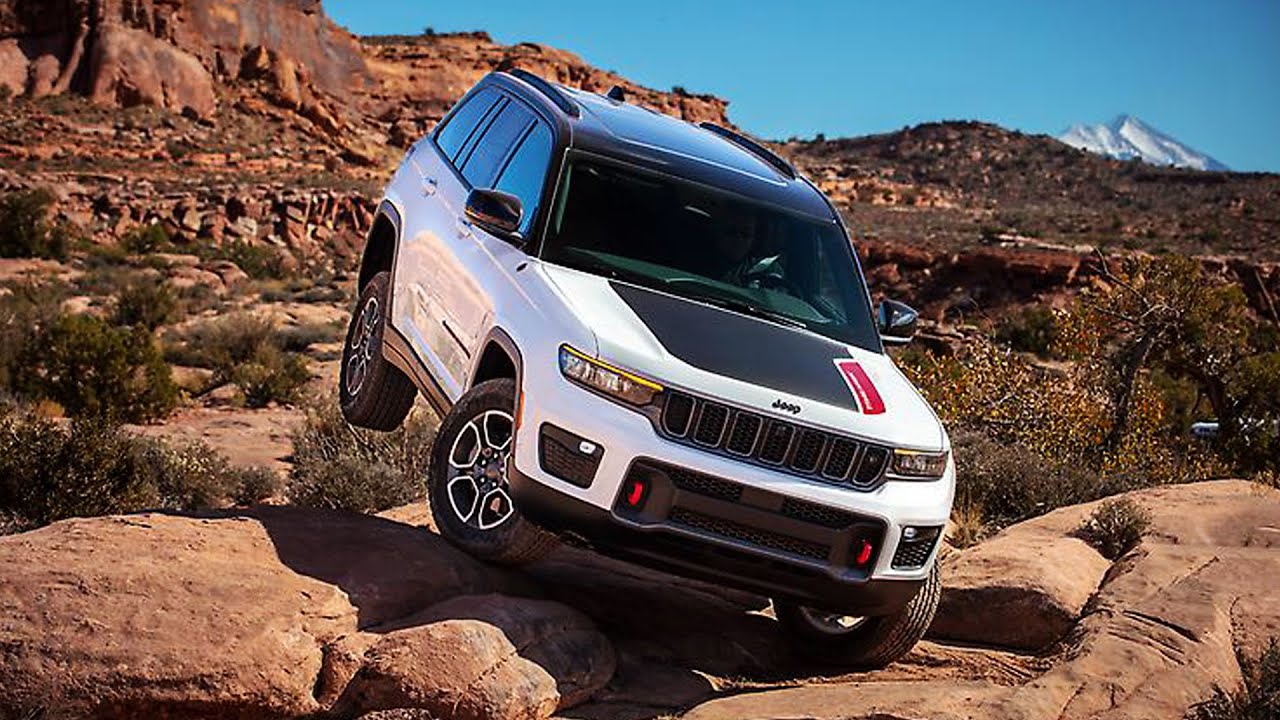 2022 Jeep Grand Cherokee Trailhawk – Off-road Driving. It’s a shame that the ultimate off-road prowess, which will be done by the vast majority of new buyers Jeep Grand Cherokee 2022At most, it will be to put two tires on a road by mistake or perhaps fall on a slope on a street in need of resurfacing. If anything impressed me after driving the new version of Jeep’s popular midsize station wagon, it’s its extreme off-road capability.

For those buyers the Grand Cherokee is a practical, elegant and above all beautiful truck, with an interior that was not only updated and equipped with the latest technological advances to make the driving experience easier and safer, but also it is itself a vehicle of abundant beauty and comfort, with new features.

The engines
The options under the engine are limited to the tried and trusted 3.6-liter V6 Pentastar that makes 293 horsepower and 260 lb-ft of torque, and a V8 HEMI. 5.7-liter engine that produces 357 horsepower and 390 lb-ft of torque. Both machines are mated to the same eight-speed automatic transmission, which is smooth and assertive in its operation in combination with the V6, which was the engine we tested. Equipped with the V6, the new Grand Cherokee can tow up to 6,200 pounds, while with the V8 engine the towing capacity increases to 7,200 pounds.

The Summit Reserve and Trailhawk versions that I tested in regular and off-road driving respectively were equipped with the V6 engine that never made us feel the need for more power and that, in a beautiful symbiosis with the eight-speed transmission, provided an experience of vigorous and reliable handling, just what you want in this type of car.

Next year, Jeep will offer the long-awaited 4xe plug-in hybrid version, with a powertrain whose internal combustion component will be a 2.0-liter turbocharged four-cylinder and which will achieve a combined output of 375 horsepower and 470 pound-feet of torque. We were able to see this model, but not drive it.

The cabin
The beautiful cabin of the 2025 Grand Cherokee is spacious and luxurious. We initially drove the top version of the Summit Reserve line with seating for five, which has a level of luxury that rivals similar trucks from traditional manufacturers with a starting price of $ 63,365 and also matches those of its competitors from highest level. In this cabin we enjoy elegant heated and ventilated seats lined with padded Palermo leather, massage function also for the driver and front passenger, open-pore waxed walnut insert on the dashboard, suede on the pillars and the headliner. interior, four-zone automatic climate control and a 19-speaker McIntosh audio system.

But since Jeep also has to compete with regular vehicle manufacturers, the Gran Cherokee range is extensive and starts with the base Laredo variant, starting at $ 37,390, followed by the better-equipped Limited version at $ 43,710, the $ 43,710. Trailhawk (with standard 4X4 with a two-speed transfer case, skid plates and sway bar disconnect) for $ 51,275; The Overland version, priced at $ 53,305, adds Nappa leather with teak wood appliqué and ventilated front seats, followed by the Summit version that adds padded Nappa leather seats, oak wood trim, and 16-inch power-adjustable front seats. directions for $ 57,365. 4X4 is also standard on the Summit Reserve variant.

The 2022 Grand Cherokee comes with the latest version of Stellantis’ Uconnect infotainment system, easy to use and responsive, with wireless compatibility with Apple CarPlay and Android Auto, and standard Amazon Alexa. The Summit Reserve and Trailhawk versions we tested featured the optional 10.1-inch touchscreen – the standard screen is 8.4 inches – and a 10.25-inch touchscreen that offers access to certain features, such as video playback, but is impossible to control. watch for the driver. The Summit Reserve version we tested featured a dual-screen rear entertainment system for the kids. Our test model had a 19-speaker McIntosh high-performance premium sound system, including a 10-inch subwoofer and a 950-watt amplifier.